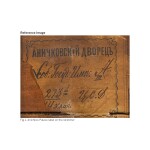 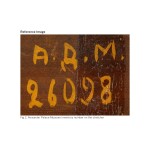 bearing an Anichkov Palace label and numbered A.D.M. / 26098 on the stretcher

Original canvas on its original stretcher. Strips of wood are nailed to the tacking edges on all four sides. The strip on the left has split. The canvas is buckling towards the centre. The stretcher is protruding in the lower left corner, which has led to some minor paint loss. A nail is protruding towards the centre of the left edge. There are a few small scratches to the roof of the house in the centre. There is fine craquelure throughout. The varnish is heavily discoloured and the surface is dirty. Inspection under UV light reveals minor retouching along the edges and a possible small spot to the roof and wall in the foreground. The thick layer of discoloured varnish prevents a more conclusive analysis. Held in its original Imperial collection frame which requires restoration.

Collection of Grand Duchess Maria Feodorovna at Anichkov Palace, until the early 1870s

In June 1867 the future Tsar Alexander III and his wife Maria Feodorovna travelled to Copenhagen on an official state visit. They were in attendance at the opening of the new Christian IX bridge connecting Falster and Laland islands with the Danish King, Maria Feodorovna's father. Bogoliubov accompanied the couple and painted a number of small-scale paintings documenting the trip which later formed part of the couple's private collection at Anichkov palace.

Property from a Private Collection, United States
ALEXEI PETROVICH BOGOLIUBOV | View of the Naval Port at Copenhagen from the Windows of Amalienborg Palace
Lot Closed
Lot 7