Property from a Private Collection, Monaco 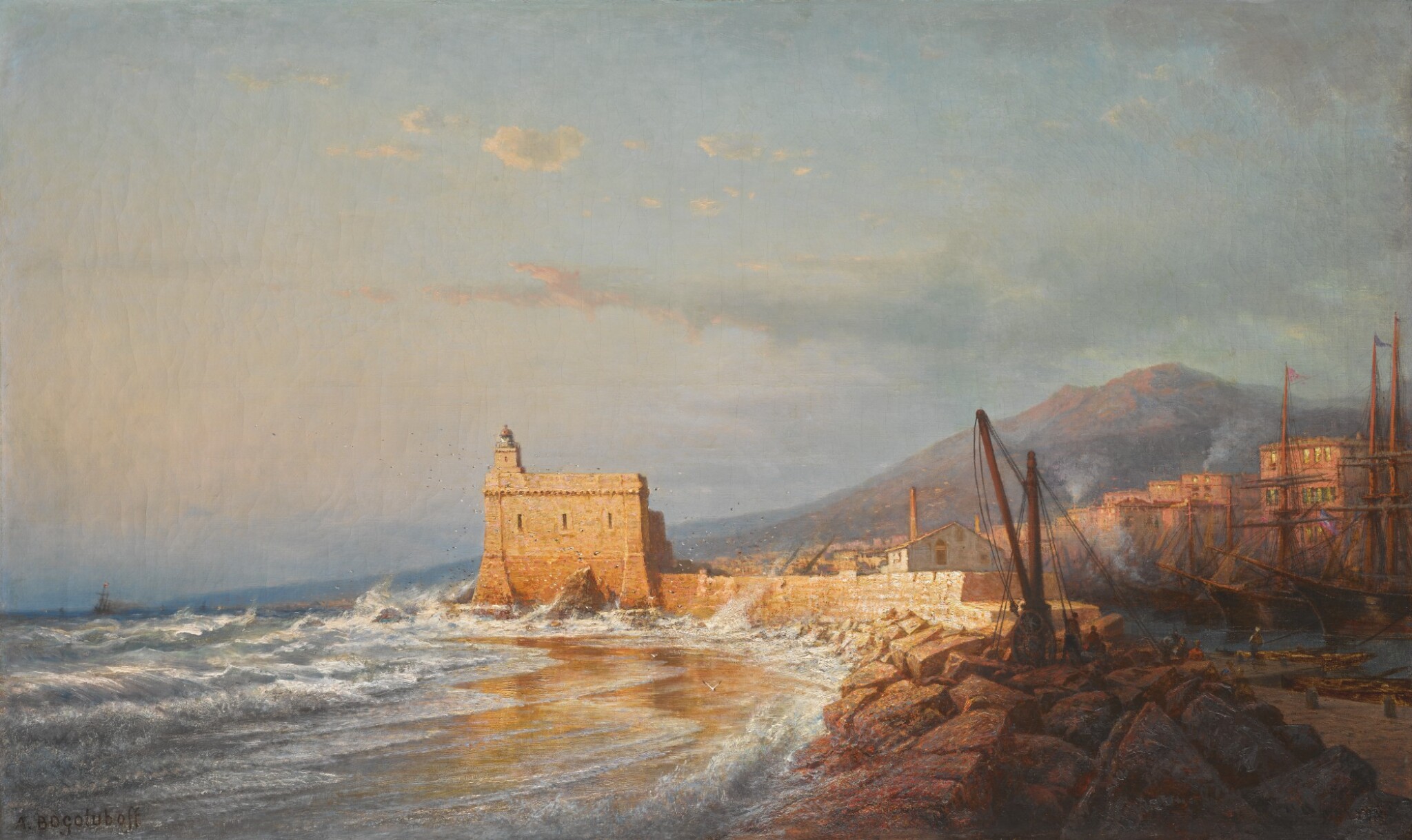 Property from a Private Collection, Monaco

The canvas has been strip-lined but appears to be on its original stretcher. There are two canvas repair patches on the reverse, roughly in the middle of the upper and lower right quadrants. There is very slight buckling in the upper left corner. A stretcher bar mark is visible through the centre of the composition. Craquelure is present throughout the paint layer and there is a large area of circular craquelure in the upper right. Some old retouching to the edges is visible to the naked eye and there are abrasions with minor losses at the outermost canvas edges. There is a layer of surface dirt and a discoloured varnish layer. Inspection under UV light reveals restoration to all four edges, sweeping areas to the sky in the upper right and other more minor spots scattered through the sky. There is also a small area of restoration between the fishermen in the lower right corresponding to one of the aforementioned repair patches. Held in a gold-painted wooden frame with decorative plaster mouldings. Unexamined out of frame.

Alexei Bogoliubov wrote on more than one occasion that the creation of large paintings was inconceivable without working from nature. In the 1880s he often spent the winter months making studies in Menton, the warmest town on the Côte d’Azur. At the centre of this striking seascape is the ancient coastal fort. The mountainsides darken in the distance and clouds rush across the windy, blue sky. Rough waves thrash the storm wall protecting the entrance to the port. On the other side of the narrow harbour sailing boats are moored. On the enormous boulders the figures of the townspeople and fishermen. As ever, the artist is precise in his depiction of the details of everyday life. With the same sensitivity he renders the transparency of the water by the shore, the reflections of the setting sun on the sea and clouds, the glimmer of sunlight on the windows.

In Bogoliubov’s autobiographical Notes of a Sailor-Artist is a valuable record of this work: ‘In January of 1885 I set to work and by spring had painted two paintings Normandy, Tréport, depicting fishermen on the beach, and Menton, Sunset in Stormy Weather. Both paintings belonged to Abram Zak, a great lover of music and of the arts in general’. In the banker’s St Petersburg house, where he often received Rubinstein, Tchaikovsky and other Russian talents, was ‘a serious collection, of both European and Russian masters’.

In 1886 both of the Bogoliubovs from Zak’s collection were shown at the 14th Itinerant Art Exhibition in St Petersburg and Moscow. The beautiful large view of Menton at evening is mentioned in almost every review of the exhibition. The author of an article in Russkie vedomosti writes at length about the various merits and faults of the exhibits: ‘The most successful work by the famous seascapist in terms of the light effects, transparency and sheer magic of the water, but also the marvellous technical skill is arguably Evening in Menton. The pink glow of the sunset reflecting in the window glass is beautifully and tastefully rendered; only the stones in the foreground are brightly coloured... The near waves are masterfully painted, but the crests of the far-off waves are rendered with such perfunctory strokes...’

A view of the Menton fortress also appears in Bogoliubov’s Menton, Storm (fig.1) now in the collection of the Radishchev State Art Museum in Saratov.

We are grateful to Lyudmila Pashkova of the Radishchev State Museum of Fine Arts for providing this catalogue note.