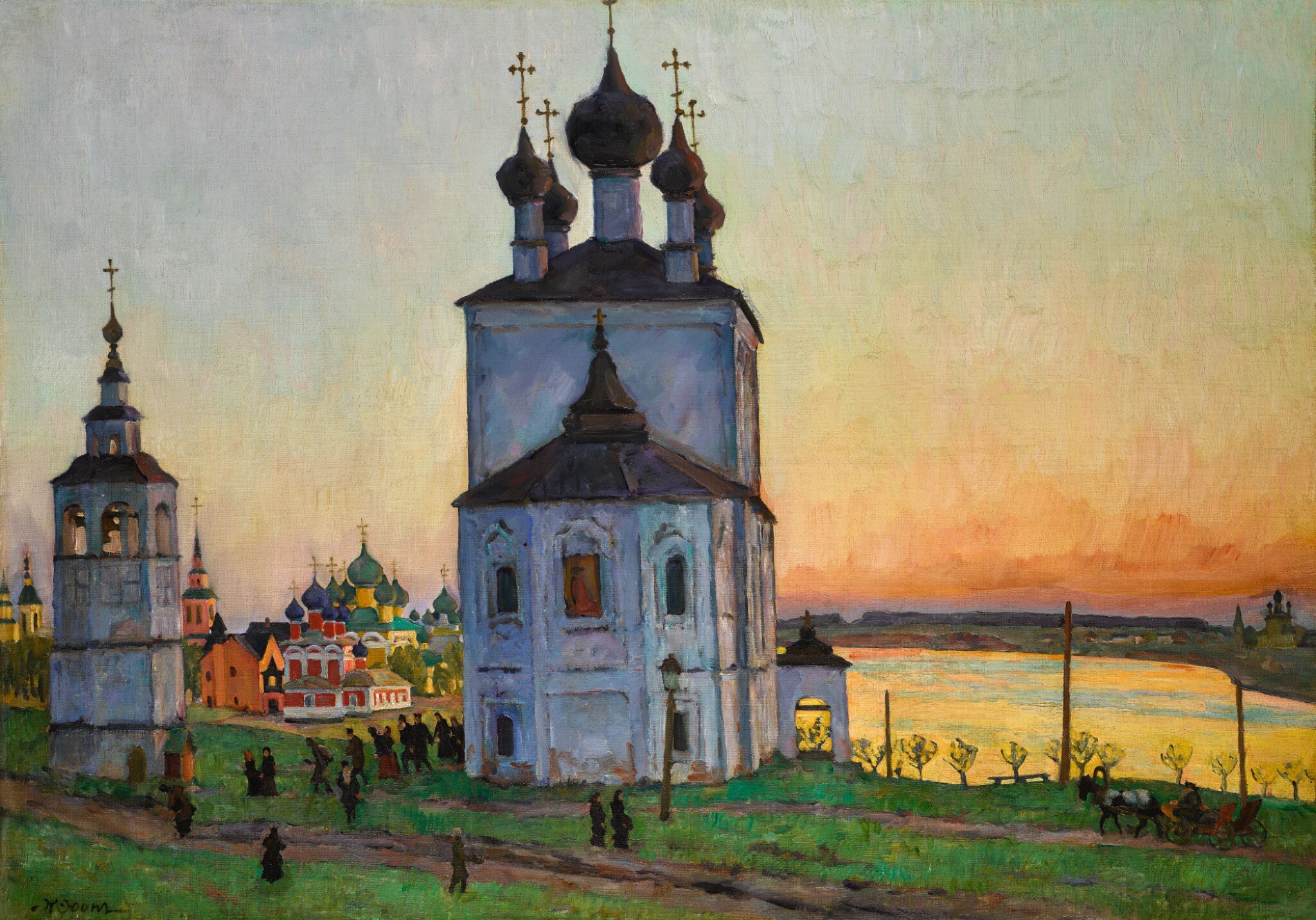 THE ANCIENT TOWN OF UGLICH

The canvas is lined and is securely attached to a keyed wooden stretcher. This is ensuring an even and stable structural support.

The paint surface has a relatively even, glossy varnish layer. There is a small horizontal area of paint loss below the right part of the upper edge. This appears stable at present. The paint surface displays scattered fine lines of craquelure. These appear entirely stable. Inspection under ultraviolet light shows vestiges of discoloured varnish covering passages of the buildings and the foreground. Inspection under ultraviolet light also shows scattered carefully applied retouchings, including:

4) scattered spots and lines of retouching within the sky

5) small retouchings within the buildings and the foreground

The painting would therefore appear to be in good and stable condition having undergone restoration work in the past.

This lot is offered for sale subject to Sotheby's Conditions of Business, which are available on request and printed in Sotheby's sale catalogues. The independent reports contained in this document are provided for prospective bidders' information only and without warranty by Sotheby's or the Seller.

Known only from a black and white photograph held in the artist's archives, which was published only once in the 1950s, the appearance at auction of The Ancient Town of Uglich is a major rediscovery. Painted in the last summer before the outbreak of the Great War when Yuon was at the height of his creative powers, it has remained unseen in Italian private collections for over a hundred years and is here published in colour for the first time.

Yuon was arguably the most successful of his peers at applying the methods of French Impressionism to Russian landscape and architecture; The Trinity Lavra in Winter (1910, The State Russian Museum) and March Sun (1915, The State Tretyakov Gallery), are today among the most recognisable and best-loved images in Russian art.

For many of his best works Yuon found inspiration in Russia’s provincial towns with their magnificent monasteries and churches, visiting them frequently: ‘My […] trips to the ancient Russian towns (Rostov, Uglich, Torzhok et al.) deepened ever further my joy as an artist, as if an untouched expanse of aesthetic values had been revealed to me, the most picturesque expression of the spiritual character and history of the Russian people.’ (Yuon ob iskusstve, 1959, vol.2, p.213). The present work dates from his trip to Uglich on the River Volga in 1913, which proved to be particularly fruitful. At the 11th Union of Russian Artists’ exhibition in Moscow and St Petersburg in 1913-14, Yuon showed no fewer than six works painted in Uglich, including the present painting (fig.1).

By the time the exhibition catalogues were printed, The Ancient Town of Uglich had already been acquired by Alexander Kasyanov (1851-1925), a wealthy merchant and partner in the Churin company who lived in Moscow and Irkutsk. Kasyanov owned paintings by other Union of Russian Artists members, such as Korovin, Arkhipov and Vinogradov, and was himself the subject of one of the outstanding portraits by Valentin Serov (fig.3). His collection was later nationalised and scattered to various museums, including those in Omsk, Yerevan, Astrakhan and Perm.

Of all the surviving views of Uglich painted in 1913, The Ancient Town of Uglich is the most accomplished. The only other oil, Morning in Uglich (fig.4) is at 71 by 89.5cm significantly smaller. Another work, which also once belonged to Kasyanov, the watercolour Market Square in Uglich, is now in the collection of the Omsk Art Museum. Another watercolour, Troika in Uglich, is today in the State Russian Museum.

At the centre of the composition is the Church of the Resurrection, built in 1748-1762 on the banks of the Volga on the site of a previous wooden church dedicated to the Holy Martyrs Florus and Laurus – the newly-built church was hence traditionally known as Florovskaya (fig.5). On the left is the bell tower which was destroyed by the Soviets in the 1930s already after the church had been closed in 1927. In the distance between the two structures one can see the blue domes of the Church of Prince Dmitri on the Blood and, just behind, the Transfiguration Cathedral.

It is unclear what happened to the painting after 1914, and the Union of Russian Artists exhibition appears to be the last record of it for several decades. Nikolai Tretyakov included a black and white photograph of it in his monograph on the artist published in 1957, a year before Yuon's death, without giving any details regarding size or location (fig.2). The author must have received the photograph from Yuon’s personal archive (now in the Manuscript Department of the State Tretyakov, f.107, op.1, ed. khr.176). The whereabouts of the painting must have been unknown to the artist himself but nevertheless considered important enough to be included in the book. What we do know is that the painting ended up in Italy and entered the collection of the great Bulgarian opera singer Boris Christoff. Among his most celebrated roles was that of Boris in Mussorgsky’s Boris Godunov. A large view of Uglich, the site of the death of Tsarevich Dmitri, would certainly have been of special significance to him.

The painting itself exemplifies all that is best and most exciting about Yuon's art; large, vibrant and bold, the image speaks both about Uglich, its churches and its mediaeval architecture and of the dawn of the 20th century. In the left hand side of the painting, soaked in the orange glow of the evening sun, the artist shows he is absolutely aware of Kandinsky and Jawlensky in Munich, while the whitewashed plaster of the church radiates purples, blues and greens. The composition is deliberately provocative, with the cathedral set centrally, while the more famous Uglich Kremlin churches are framed by the space between it and its bell tower. The Ancient City of Uglich is, by its size, period, subject matter and quality undoubtedly a rediscovered masterpiece not only of Yuon's, but of Russian art of the Silver Age.