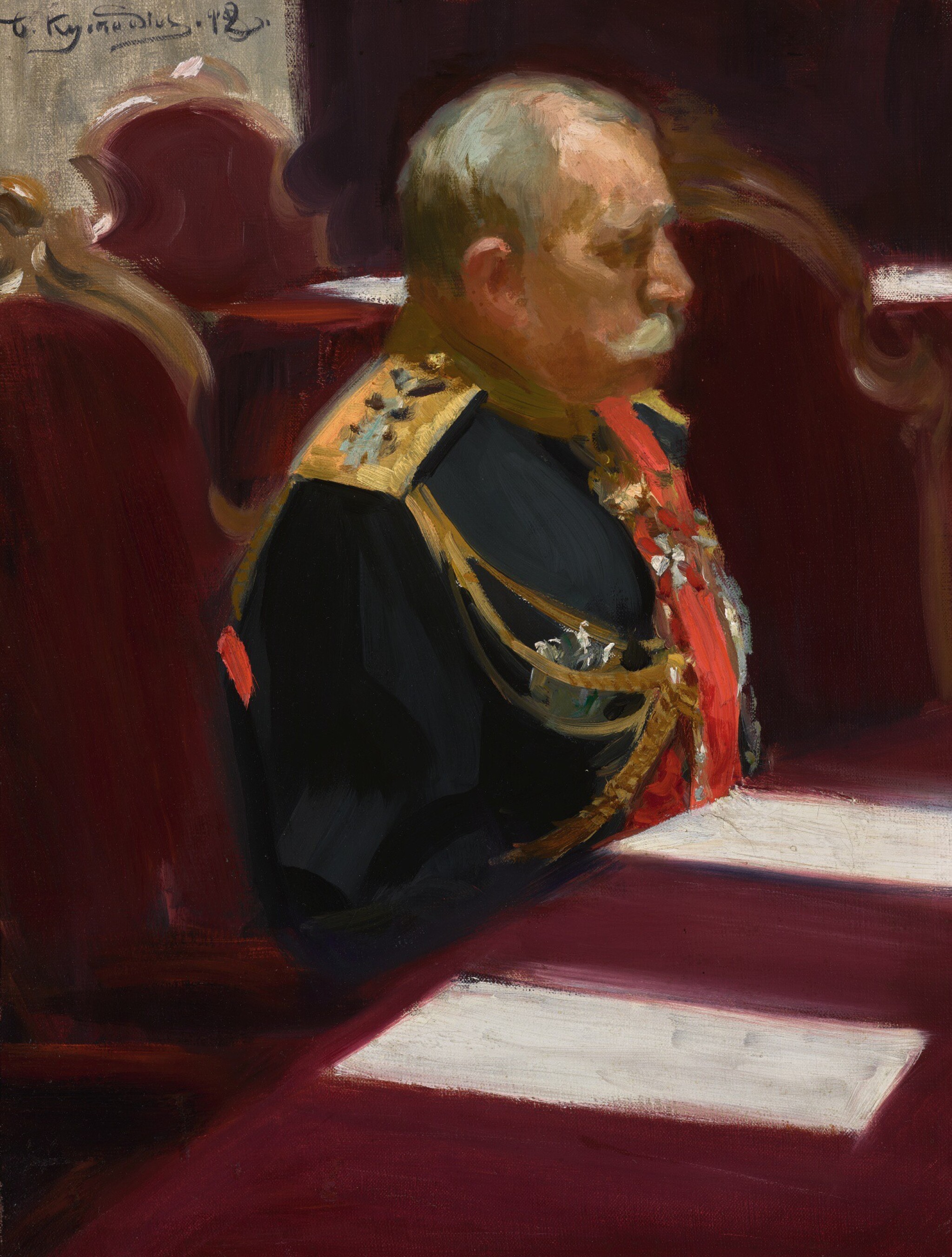 signed in Cyrillic and dated 902 t.l.

Original canvas. Two small patches are visible on the reverse. There is very fine craquelure to the white sheets of paper. There are minor frame abrasions with associated paint loss along the edges. Inspection under UV light reveals some minor retouching to areas corresponding to the aforementioned patches. There are some further small areas of retouching in the lower left, along the bottom edge as well as some very minor scattered retouching elsewhere. Otherwise in very good condition, clean and ready to hang. Held in a gold painted wooden frame with decorative mouldings.

Collection of the sitter

Thence by descent to the previous owner

The present portrait of Admiral Oskar von Kraemer belongs to a series of preparatory studies executed by Boris Kustodiev for Ceremonial Meeting of the State Council on May 7, 1901. The monumental large-scale composition, now at the State Russian Museum (fig.2), was commissioned by Emperor Nicholas II to commemorate the centenary of the State Council, an event celebrated with a ceremonial meeting in the Round Room of the Mariinsky Palace in St Petersburg.

The execution of the painting was entrusted to Ilya Repin, at the time at the peak of his career. However, suffering from painful arthritis in his right hand, he requested permission to hire assistants. He chose Boris Kustodiev, a graduate of the Imperial Academy of Arts and one of his most talented students, who had a gift for portraiture and a not dissimilar style, making him the perfect candidate. Kustodiev and Repin's other student Ivan Kulikov, assisted at every stage of the daunting commission: 'The canvas is so large, you feel really small in front of it', Kustodiev wrote to his fiancée.

Repin insisted on individual sittings and accepted the colossal task on the condition that he be granted exceptional permission to attend the Council's sessions. In preparation for the piece, the three artists executed a great number of studies and sketches of the councillors posing in their customary places in the Council Chamber. In all, Kustodiev completed 27 preparatory portraits, including the present lot.

Of Finnish noble extraction, von Kraemer enrolled in the Alexandrovsky Cadet Corps and later the St Petersburg Naval Academy while still a child. After graduating as a naval officer, Kraemer pursued an illustrious military and diplomatic career and served as Admiral under three Emperors. He fought and was wounded in the defense of Sebastopol and commanded several ships, including the notorious frigate Alexander Nevsky which was shipwrecked in 1868 with Grand Duke Alexei Alexandrovich on board. At the age of 67 he was appointed member of the Russian State Council. Highly favoured by the Russian Imperial Court, Kraemer was also a patriot of his homeland and unhappily witnessed the deterioration of Russo-Finnish relations at the turn of the 20th century. Risking his own position, he even tried to convince Nicholas II to change policy. Although better known in Russia than his native Finland, Oskar von Kraemer was the most highly-decorated Finnish naval officer of the 19th century. He is the subject of a biography by Heiki Tiilikainen, published in Finnish in 2008, and in Russian in 2014 with the title Admiral trekh Imperatorov (Admiral to Three Emperors) (fig.1).