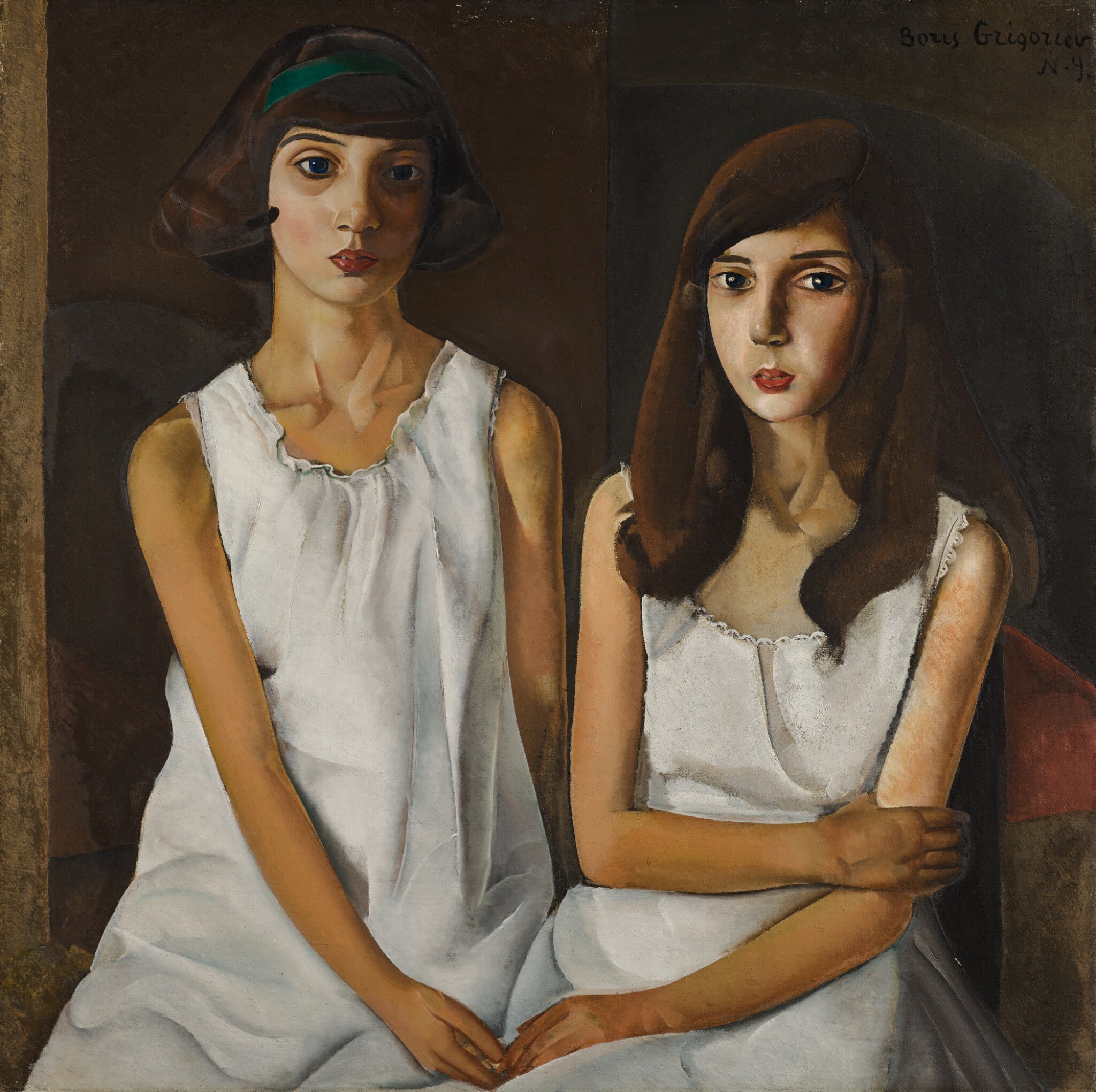 The artist's personal archives, now in a private European collection, contain an original photograph of this work.

The canvas has been wax lined and is securely attached to a relatively modern, wooden expansion bolt stretcher. The canvas appears in plane and free of distortions.

The paint surface has the artist's original unvarnished appearance. There is a small delaminating artist's brush hair within the left side of the left hand figure's hair. There are scattered areas of what appears to be discolouration within the brown and ochre painted background . There are slightly raised networks of fine lines of craquelure with some minor associated paint instability and a few minor losses within the pale painted dresses. There are also scattered minor paint losses with associated paint instability below the centre of the upper edge, a paint loss towards the lower right corner and a loss within the right hand figure's hair. Other very minor losses are also visible including on the extreme edges of the composition. Inspection under ultraviolet light shows scattered retouchings, including:

1) intermittent retouchings on and close to the extreme edges of the composition, most notably an area below the centre of the upper edge which is also visible in natural light

4) a few small spots and lines of retouching within the right hand figure's left cheek and the right side of her hair.

The painting would therefore appear to be in good condition and would benefit from the localised consolidation of any areas of fragile paint and for infilling and retouching any paint losses.

This lot is offered for sale subject to Sotheby's Conditions of Business, which are available on request and printed in Sotheby's sale catalogues. The independent reports contained in this document are provided for prospective bidders' information only and without warranty by Sotheby's or the Seller.

Portraiture was one of Boris Dmitrievich Girgoriev’s great strengths. He started to work in the genre while still in Russia, at first painting his family (wife and son) and friends (the bohemian set of St Petersburg and Moscow). In emigration, post-1919, his circle of sitters widened substantially to include fellow exiles and many foreign admirers of his work.

In the first half of the 1920s Grigoriev enjoyed renown and popularity in the USA: he had solo shows in galleries in New York, Philadelphia, Chicago and Detroit; he exhibited at the major collective exhibitions of Russian art (in 1923, 1924 and 1932); and at international exhibitions; his work was acquired by private collectors and he received many portrait commissions.

This portrait of twin-sisters, the children of the artist Florence Cane (1882-1952) and the poet and lawyer Melville Henry Cane (1879-1980), was painted by Grigoriev very quickly in October and November of 1923, during his first visit to the USA. He arrived in New York on the steamer Paris on the 20th October 1923 and was met by his old friend David Burliuk who had published a welcoming article in the newspaper Russkii golos [Russian Voice], in which among other things he revealed his guest’s plans: ‘While in America Boris Grigoriev will first paint a portrait of Charlie Chaplin. At the end of November there will be an exhibition of his paintings, on which we shall be reporting in due time.’ (Russkii golos, New York, 23 October 1923). The exhibition at the New Gallery opened on 18th November, on which the Russian newspaper did indeed report, remarking upon ‘the productivity of B.D. Grigoriev, in 2 weeks the artist has managed to finish 5 portraits and 2 landscapes. All finished canvases were sold.’ (‘Khronika’, Russkii golos, New York, 18 November 1923).

The Cane family were one of the most notable in New York for their cultural interests and their circle included artists, writers and actors (such as Charlie Chaplin) so it is not surprising that the portrait of the Cane twins, Katherine (1910-2013) and Mary (1910-2003), was included in the exhibition (no.11). Moreover, the founders of the New Gallery, which had already held a solo exhibition and successfully sold Grigoriev’s work, were Florence’s father, Max Naumburg (1847-1931), and his nephew James Rosenberg (1874-1970), a lawyer, painter, writer and patron of the arts.

The main reason for the success of the Cane sisters’ portrait in fact lies in the success of the artist in conveying the intimacy and warmth of sibling affection between the young girls, emphasised by the light clothes. He has also managed to catch a sense of their artistic sensibilities, as if divining their unconventional fates (both girls became artists, famous pedagogues and specialists in the field of art-therapy. This gift of ‘vision’, possessed by those of certain intrinsic qualities, was typical of Grigoriev who always sought not just a certain originality in his sitters but a complexity of their spiritual makeup, even if they were children.

After the New York exhibition, the painting was shown at the artist’s solo show at the Worcester Art Museum in 1924 where it acted as a curatorial and emotional counterpart to the artist’s other celebrated double portrait, depicting a young boy and girl from the French countryside (fig.2). This juxtaposition only served to emphasise the lightness and tenderness of the portrait of the Cane twins, and its subjects, the enchanting young girls poised at the threshold of their lives.

We would like to thank Dr Tamara Galeeva for providing this catalogue note.