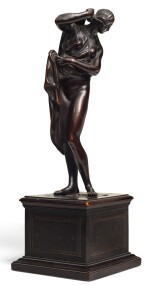 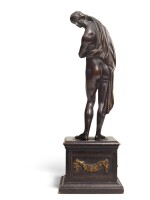 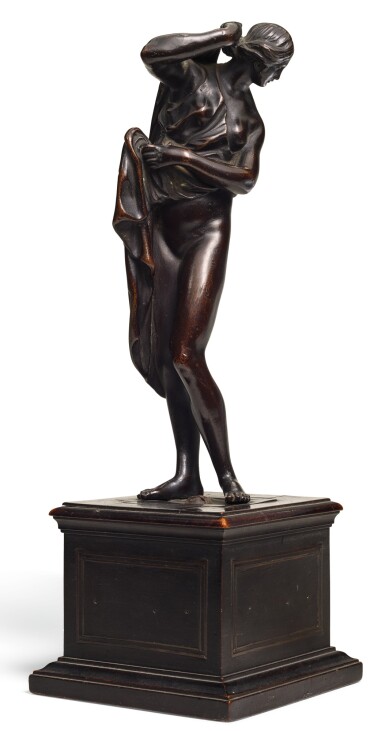 FRENCH OR ITALIAN, 18TH CENTURY AFTER THE ANTIQUE | CALLIPYGIAN VENUS

FRENCH OR ITALIAN, 18TH CENTURY AFTER THE ANTIQUE | CALLIPYGIAN VENUS

bronze, on an ebonised wood base with gilt metal mounts

Overall the condition of the bronze is good, with minor wear and dirt to the surface consistent with age, including dust in the crevices. There is rubbing to the lacquer patina at the high points and some flaking. There are several nicks and small dents, including at the legs and arms. Stable original casting joints are slightly visible at the upper arms. The bronze is attached to the base with a large metal screw.

There is minor general wear to the metal mounted wood base, including some splitting and a small loss at one of the bottom corners.

Inventory, 26th September 1807, probably one of the '12 bronze figures groups over bookcases' in the Library;

Inventory, 27th June 1836, probably one of the ‘bronze figures copies from the antique all brought from Rome by Robert Earl of Leitrim' in the Library;