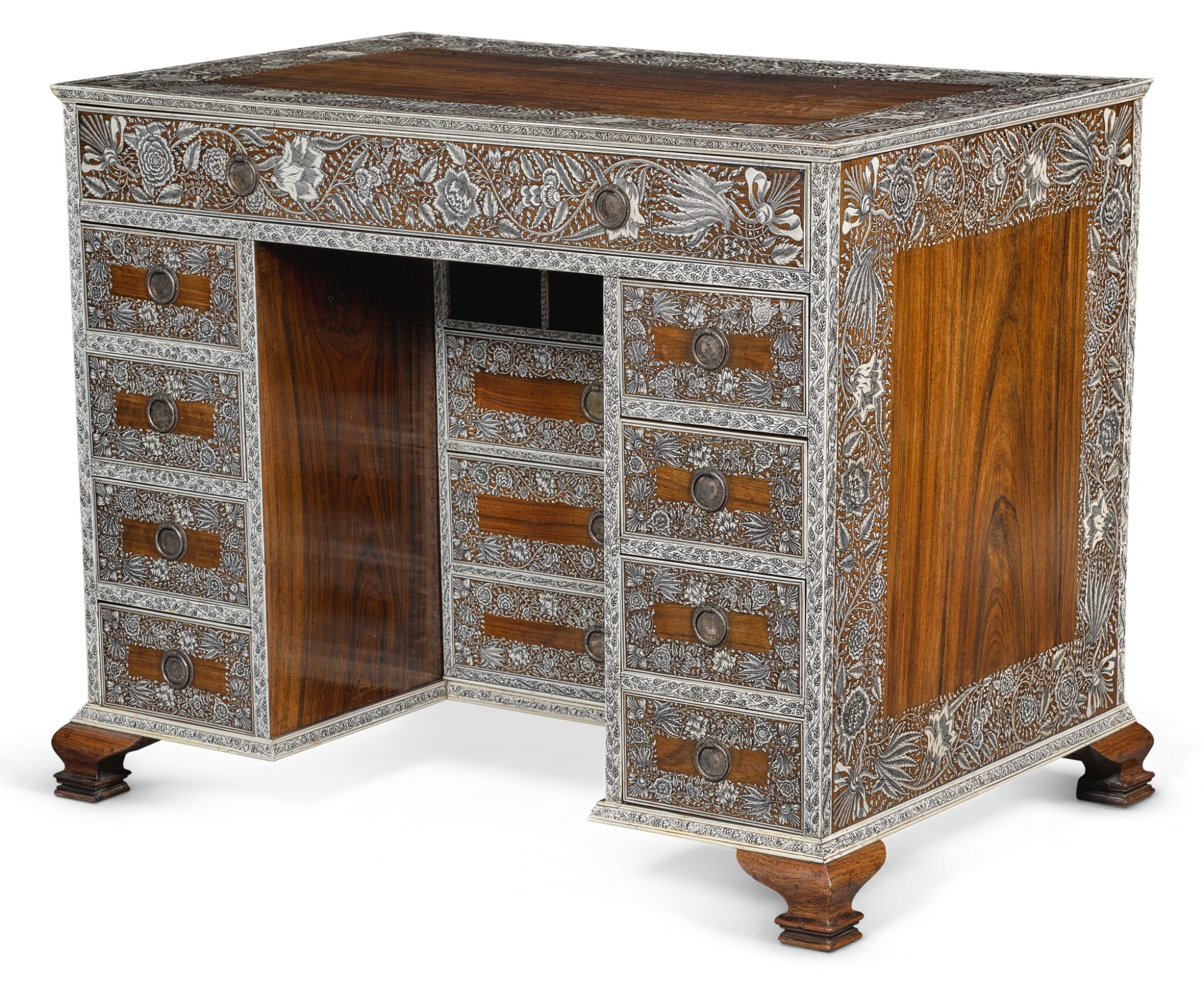 the rectangular top with a border of finely engraved and inlaid trailing flowers and foliage with tied ribbons to the corners above a similarly engraved long teak-lined drawer and two banks of four short drawers, the kneehole with a sliding and removeable compartment with triple-arched frieze and three pigeon-holes above three further short drawers, with engraved silver-plated ring handles throughout, the sides with similarly engraved and inlaid borders on ogee bracket feet

An exceptional piece of furniture in overall excellent restored condition and ready to place. The desk was offered previously at Christie's London, 7 July 2011, lot 15 and it is worth comparing the two catalogue images. There are several small resin replacements to missing engraved ivory veneers and bandings which have been executed brilliantly. The rosewood has been sensitively polished to shows off the wonderful figuring. Age splits to top, sides and inside of kneehole have been expertly stabilised and filled in and are now hardly visible. Generally the rosewoood, perhaps most notably to the top, has minor old marks and scratches consistent with age and use. The engraved ivory inlay is exceptionally fine with minor lifting in areas, small hairline splits and some losses/filler once again, entirely consistent with age and use. The central bank of drawers to the kneehole slides out with ease. Front right ogee bracket foot with minor chip.

This lot contains ivory and other restricted materials. Sotheby's recommends that buyers check with their own government regarding any importation requirements prior to placing a bid. Please note that Sotheby's will not assist buyers with CITES licence applications where a buyer elects to either collect or arrange their own shipping, nor will Sotheby's assist with the international movement of ivory/rhino horn by air, either as freight or through hand carry. Sotheby's shipping will only assist in shipping the lot to either domestic UK or EU destinations, where delivery is made by road transport. A buyer's inability to export or import these lots cannot justify a delay in payment or sale cancellation.

Almost certainly acquired by Audrey, Lady Townshend (d.1788), around 1745, thence by descent to her son;

John, 4th Marquess Townshend (d.1863), and thence by descent at Balls Park, Hertfordshire, until 1901 when removed to Raynham Hall, Norfolk;

This Anglo-Indian kneehole desk belongs to an important group of related examples which were made in the town of Vizagapatam, a port on the northern stretch of the Coromandel Coast, famed for its ivory inlay on western forms of furniture. Although it is not known exactly how this technique was born, it is thought that textile designs produced locally for export and examples of European marquetry on writing slopes, rifles and gun boxes may have been influences. Vizagapatam was a bustling harbour, situated between Calcutta and Madras which was frequented by craftsmen travelling between Madras, Bengal and the East Indies. The region to which Vizagapatam belonged was rich in fine timbers including rosewood, teak and other raw materials including ivory were readily available from neighbouring countries such as Pegu. The coastal region of the Northern Circars had an established ship-building industry and it is conceivable that the European carpenters employed provided the local craftsmen with cabinet-making expertise. The art of inlay work of this region is recorded in the mid-eighteenth century, when Major John Corneille noted in 1756 that Vizagapatam was known for the quality of its chintz, which ‘is esteemed the best in India for the brightness of its colours’ and that ‘the place is likewise remarkable for its inlay work, and justly, for they do it to the greatest perfection’1. Many of the comparable desks discussed below were commissioned by key figures in the figures in East India Company. The earliest of these is apparently that which was acquired by Richard Benyon, Governor of Fort St. George, Madras, from 1734-44 and is now at Engelfield House, Berkshire (fig. 1). The Benyon example features a combination of rosewood with wide ebony borders, the dense ivory inlay of trailing small flowers confined to the borders, a characteristic identified by Amin Jaffer as indicating a date on manufacture in the first quarter of the 18th century2.

Another knee-whole desk which was acquired by Robert Clive (d.1774) is now at Powis Castle, Powys (fig. 2). Clive served a number of terms in India, first travelling to Madras in 1744 as a writer or clerk in the East India Company though distinguishing himself in military actions, and then serving in Bombay (1755-60) and Bengal (1765-67). The Clive desk, with a closely matching though not integral toilet-glass, must have been acquired in his first or second term of service since it is recorded that the feet were replaced by the London cabinet-maker George Bradshaw in 1761. In common with the Clive desk and other examples from this slightly later group, the present lot is made of only one primary timber, the ebony borders no longer employed, and the marquetry is more painterly, featuring large leaves and oversized tulip-like flowers tied with ribbons at the corners, in addition to the dense small flowers of the Benyon table. While the superb Clive table features a curved arched kneehole, others, like the present lot, have a rectangular kneehole with a sliding compartment of pigeon-holes and drawers indicating a dual purpose.

Another made in rosewood and with virtually identical marquetry was exhibited by Lennox Money Antiques, London, at the Grosvenor House Antique Dealers Fair, 1977. This was given by Warren Hastings to his goddaughter on her marriage to George Elwes of Marcham Park, Berks, 1789.

Other closely related writing/dressing-tables include one sold Sotheby's, New York, Property from the Collection of Lily and Edmond J. Safra, 3 November 2005, lot 144 ($828,000 with premium). Executed in padouk rather than rosewood, it features almost identical marquetry with large flowers and tied ribbons to the corners3. A further example probably supplied to Henry Vansittart (1732–1770) when Governor of Bengal from 1759 to 1764 or his brother George Vansittart (1745-1825) when in Bengal from 1761 to 1776 was sold Sotheby’s, Recollections of Places Past, Property from the Estate of Sir John and Lady Smith, 9 July 2019, lot 150 (£337,500 with premium) (fig. 4). For a near identical version to the Vansittart desk, almost certainly for the same workshop, with the same handles and ivory veneered bracket feet, see that in the collection of the Fitzwilliam Museum, Cambridge, and which at one time was owned by Sir Thomas Rumbold (1736-1791), Governor of Madras (M.3-2016) (fig. 3). A member of the Bengal Council between 1766- 1769, Sir Thomas would have undoubtedly known Henry Vansittart during his tenure as Governor making it conceivable the two desks were commissioned at the same time. Another sold Sotheby's, London, The Property of Mr. and Mrs. Henry Cotton, 14 November 1975, lot 68. All of the above feature a sliding compartment to the kneehole with the same arrangement of drawers and pigeon-holes.