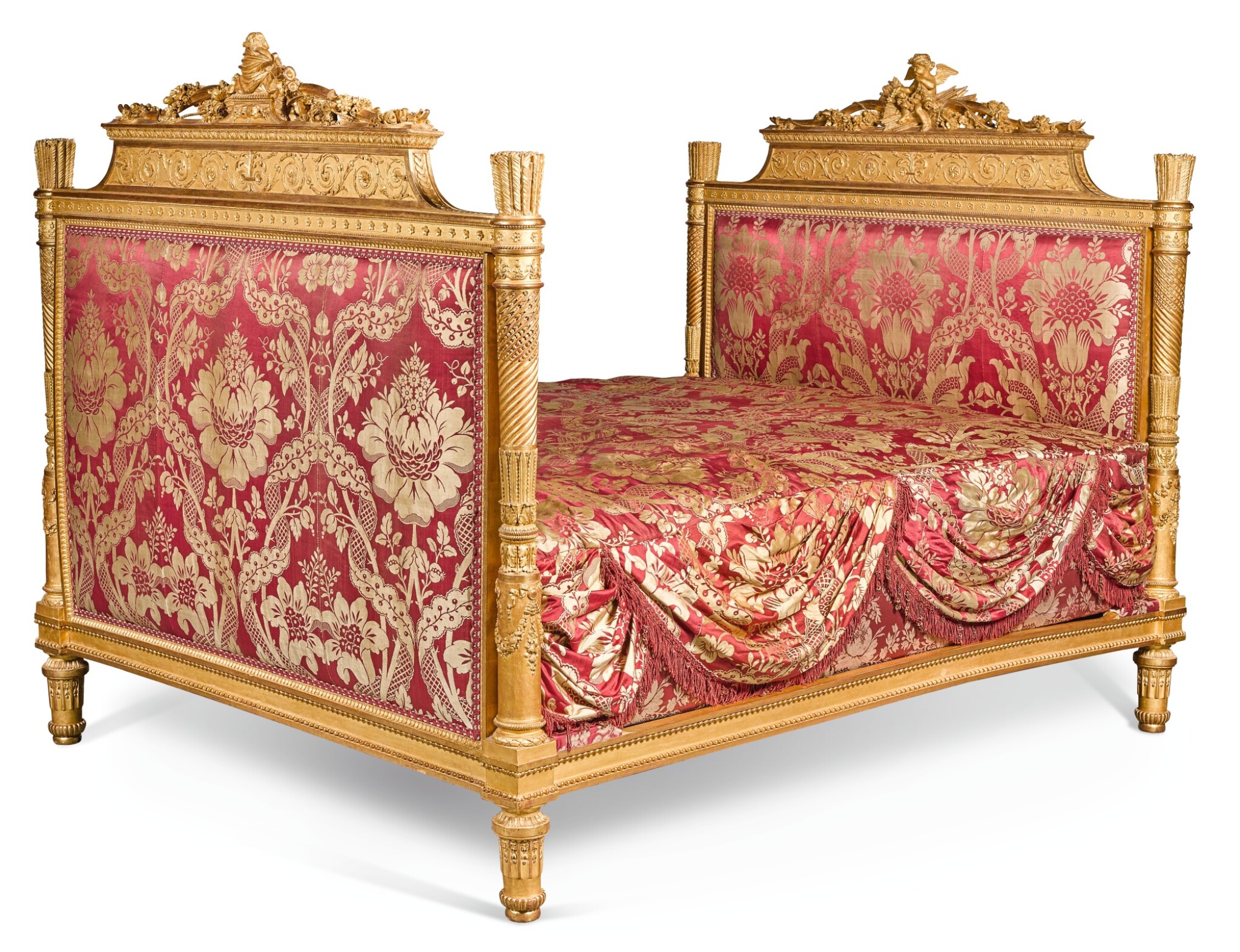 two headboards flanked by columns with two-thirds of the column forming a quiver full of arrows, carved with twisted flutes, decorated with vegetable motifs, bells of lily of the valley and beading with daisies and palmettes above, one headboard crowned with a figure of woman, lying and crowned with ivy leaves symbolizing "Terpsichore", muse of the Dance, resting on a medallion adorned with a head of a woman in profile, behind her are the attributes of music: a harp and a trumpet, the other headboard with Cupid resting next to a group of arrows and flower garlands

This stunning bed is in excellent conserved condition having been judiciously re-gilt. Very minor chips and losses to gilding consistent with age and use. One repaired break to a trumpet on the left handside of the recumbent carved woman on one headboard. The silk damask upholstery is in good condition, minor wear to one side of back of the board with cupid.

The rich and refined carvings of this bed point to the skilled menuiserie work of one of the best-known craftsman during Louis XVI’s reign, Georges Jacob. The decorative elements of clever proportions and original design also suggests its illustrious owner, the ballerina Mademoiselle Guimard, who embodied the peak of the dance scene in the second half of the 18th century.

This bed belongs to a group of similar examples, now in public and private collections, either stamped by Georges Jacob or attributed to the menuisier reçu maître in 1765, who clients included aristocracy all over Europe. These beds share common elements which are characterized by the use of low rails, the similarities of the headboard’s carving and the overall quality and precision of the menuiserie. Some beds even share the use of posts in the form of bows filled with arrows. As a joiner, Jacob would have been responsible for providing and cutting with precision the wood, and for starting to carve the mouldings. The final execution of the flowers and other carved details that embellish the headboard was then polished by a talented sculptor Georges Jacob worked with.

There are two beds stamped by Georges Jacob that directly relate to the current lot. The first is a lit à l’italienne in the collections of the Victoria & Albert Museum (inv. no. 8459:1 to 31-1863) featuring bow-shaped posts and with carvings on the top of the headboards of similar style -fig.1. The second example, commissioned by either the 1st or 2nd Duke of Praslin is a lit à la duchesse in the Metropolitan Museum of Art (inv. no. 23.235a) with an almost identical frieze at the top of the headboard -fig.2.

Following these examples, beds attributed to Georges Jacob that share similar decorative features including the frieze below the headboard and the bow-shaped posts are recorded:

- one bed with a carved arrow placed at the center of each headboard is in the collections of the Cleveland Museum of Art (inv. no. 1954.151).

Besides beds, a number of furniture pieces by Georges Jacob can be related to the present lot. For example, the frieze of a canapé supplied in 1797 by Jacob to Versailles for the apartments of the Dauphin (inv. no. V4925) is similar and a chair, now at Chantilly, supplied to the Queen (inv. no. OA321) features bow-shaped feet.

Marie-Madeleine Guimard (1743-1816) was one of the most famous courtesans of pre-Revolutionary France and one of the most important dancers of the Ancien Régime. She began her ballet career at the Comédie-Française in Paris at age 15. From 1761, she is accepted to the Académie Royale de Musique where she made a wildly successful debut playing Terpsichore, one of the nine muses and goddess of dance, in Fêtes Grecques et Romaines. She went on to cultivate her image as a contemporary Terpsichore for three decades, onstage and off.

This bed is believed to have been owned by Mademoiselle Guimard on the basis of the decorative features of the bed. The motifs chosen bear a direct connection to Guimard’s life, a woman who liked to have her interiors and furnishings customized to her character, Terpsichore (see for example a portrait of her as Terpsichore painted by Jacques-Louis David, sold Christie's New York, 5 June 2013, lot 41). One end of the bed is carved with a female figure symbolising the Goddess of Dance, Terpsichore, surrounded by her signature lyre and trumpet, flower garlands and is shown leaning on a portrait medallion, probably depicting Marie-Madeleine Guimard. On the opposite side, the figure of Cupid with his bow was carved amidst garlands of flowers and leaves, making a nice echo to the bed’s posts.

This bed was probably placed in a bedroom at her residence, the Temple of Terpshicore, on the rue de la Chaussée d’Antin in central Paris which she had commissioned in 1770 to the French acclaimed architect, Claude Nicolas Ledoux. Assisting Ledoux with the interior decoration were: Jean-Baptiste Feuillet, responsible for the sculptural ornamentation and stucco work, Jean-François Leleu, for the boiserie, Félix Lecomte as the sculptor; and the painters Jean-Honoré Fragonard and Jacques-Louis David (A. Vidler, Claude Nicolas Ledoux, Cambridge, 1990, p.53). There are no records so far of a commission of furniture pieces by Mademoiselle Guimard to Georges Jacob. There are records however of projects where the careers of Ledoux and Jacob overlapped. For example, the Hôtel Hosten was commissioned by Jean-Baptiste Hosten and was designed by Ledoux with the constructions starting in 1790. A suite of furniture pieces including two marquises, four armchairs and four chairs for Hosten’s bedroom was supplied by Jacob in 1795, offered at Ader on 24th June 2016, lot 329. It is possible then that the pair had collaborated for the Hôtel Guimard a few years before.

The Hotel Guimard was acquired in May 1785 by the Comtesse de Lau, but was demolished in 1862 following Baron Haussmann’s urban renewal program for Paris. However, Ledoux’s plans and elevations for the Hôtel survive. The plan illustrates three “chambres à coucher”, one on the ground floor and two on the first floor. The measurements of this bed perfectly match those of an alcove in one of the elegant bedrooms on the first floor.

Guimard was equally notorious for her amorous exploits. Her conquests included Jean-Benjamin de la Borde, an amateur musician and first valet to the King; Charles de Rohan, Prince de Soubise; the bishop of Orléans; and even possibly the painter Fragonard, whose portrait of her now hangs in the Louvre. She triumphed in the following ballets of Jean-Georges Noverre (1727-1810): Jason et Médée (1770), Les caprices de Galatée (1776), et de Maximilien Gardel (1741-1787), La Chercheuse de l'Esprit (1778), Mitza et Lindor (1779). In 1785, she conquers the British audience as she follows Noverre and dances at the King’s Theatre, London. She also danced for the Court at Versailles and Fontainebleau (the King offered her a pension of 1000 louis).