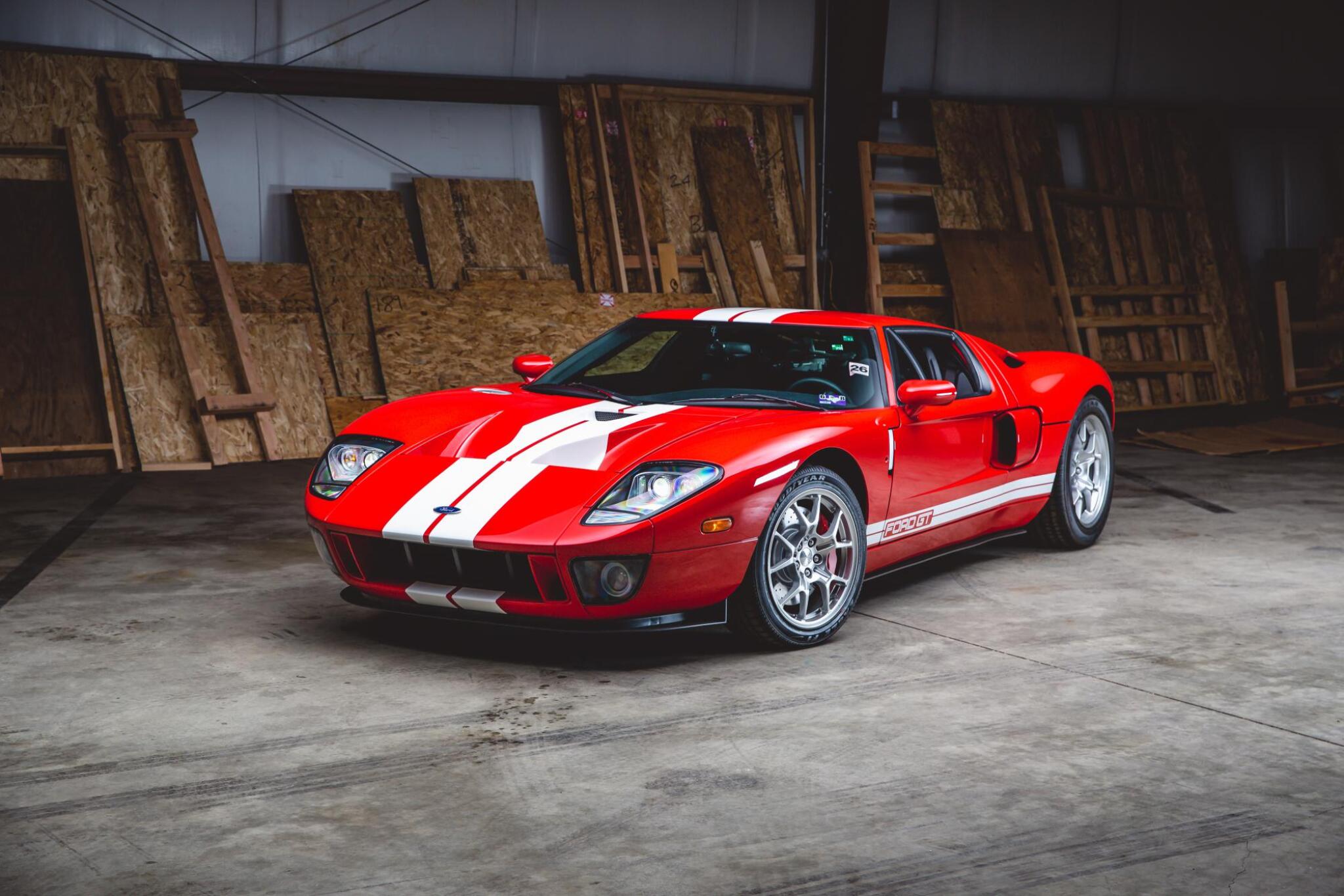 Virtually brand-new with only 11.7 miles from new

Considered the last of the analog supercars

Introduced in 2005 as a stylistic and performance homage to the legendary Le Mans–winning GT40s of the 1960s, the Ford GT featured absolutely stunning performance, the likes of which had not been seen from a production car built in Detroit. Powered by a 5.4-liter DOHC V-8 engine featuring a Lysholm twin-screw supercharger, the GT is rated at 550 hp and 500 foot-pounds of torque. The engine is paired to a Ricardo six-speed manual transmission featuring a helical limited-slip differential. This driveline allows the Ford GT to achieve a 205 mph top speed and a 0–60 time of only 3.3 seconds. These extraordinary performance figures put the car in competition with other supercars of its time, such as Porsche’s Carrera GT and the Mercedes-McLaren SLR.

This stunning 2006 Ford GT is finished in Red with white stripes. It is a highly desirable “four-option” example, featuring painted racing stripes, red-painted brake calipers, forged alloy BBS wheels, and upgraded McIntosh radio—the entire gamut of available options for the model. The car was sold through Planet Ford of Humble, Texas, with the dealership completing a pre-delivery inspection at the end of June 2006. It was sold shortly thereafter to its first and only private owner, a Texas resident. Over the course of its thirteen-year life, the car has covered only 11.7 miles and accordingly presents in as-new, virtually showroom-fresh condition. Stored from new, this original, well-preserved example is accompanied by its window sticker, certificate of authenticity, manuals, air compressor, and a car cover within its bag. For 2006 Ford produced only 2,011 examples of the GT; of those, only 327 were delivered in Red with full stripes.

Commanding a considerable premium since its release, the Ford GT has remained highly sought after in the collector car market. It has the distinction of being one of few cars to have never dropped in value below its original MSRP—a true testament to its stunning design, extraordinary performance, and outstanding collectability. The Ford GT is what it set out to be—“the pace car for an entire company.”

Please note that Ford has issued an open recall to replace the car’s airbags. This is a straightforward matter to rectify, and RM Sotheby’s will work with the successful buyer to ensure the recall is addressed free of charge by an authorized Ford dealer prior to delivery to the client.