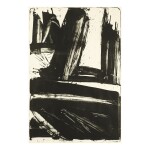 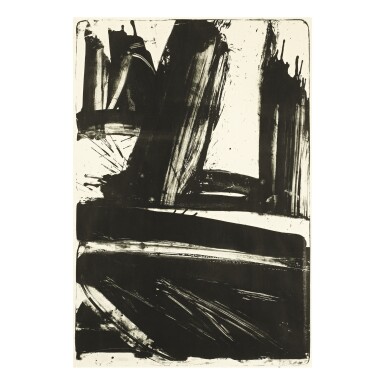 Lithograph, 1960, signed in pencil, a rare example from the total edition of 10 or 11 impressions, 8 of which are signed, on wove paper, printed by Nathan Oliveira and George Miyasaki at the University of California at Berkeley, published by the artist, framed

A very good impression of this rare print. Pale discoloration in the margins, a small stain at upper left and minor specks of foxing throughout.

Willem de Kooning’s  Litho #1 (Waves #1) is heralded as a vital contribution to post-war American prints. This rare and remarkable example of contemporary printmaking is larger in scale than most prints of the era and extraordinarily impactful. There is depth and texture in the sweeping strokes of ink that belies its two-dimensionality and the commanding composition is imbued with the same force the artist had already mastered in his paintings.

The concept of printmaking did not initially hold appeal to the Abstract Expressionist artists as their traditional method of applying everything to the surface and then reworking the composition was simply not germane to the medium. As well, it was frustrating that each color needed to be added separately, revealing the full image layer by layer rather than all at once. For this reason, the few forays into printmaking by de Kooning's contemporaries such as Jackson Pollock, Franz Kline or David Smith, were black and white.

The execution of Litho #1 (Waves #1) was unplanned and thus befitting of an artist whose work never seemed premeditated. On a 1960 trip to the San Francisco area, de Kooning visited the University of California Berkeley printmaking studio and worked with Nathan Oliveira and George Miyasaki. It was there that with a four foot high lithographic stone, using a mop-like brushstrokes, he created Litho #1 (Waves #1) and the companion print Litho #2 (Waves #2).  The edition was quite small and only eight impressions were signed.  One of these, from the collection of Berkeley professor Karl Kasten, who first extended the invitation to the workshop, was acquired by the Fine Arts Museums of San Francisco in 2011.