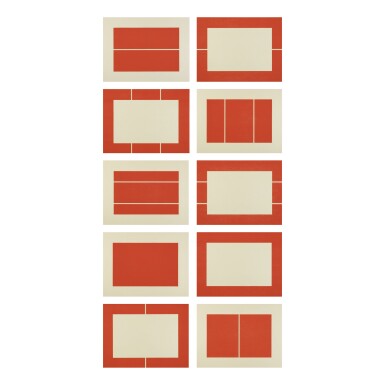 The prints are in good condition, with fresh colors.

MINIMALIST and WOOD are two words describing work by Donald Judd, the 20th century artist most readily known for his sculptures. Judd as a printmaker stayed true to the simple structures he had created in other mediums and the very nature of the woodcut with the inked raised surfaces and negative space created by the voids, directly relates to the spatial considerations of Judd’s three dimensional work. The multiplicity of an edition effortlessly correlates with sculptures distinguished by their repetitive nature as were Judd’s boxes and the serial element of these woodcuts speaks to the artist’s signature variations on a single form. Every print in the present portfolio complements another, forming a deconstructed puzzle of vivid red and though the imagery is stark, the effect is arresting.