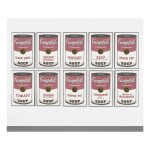 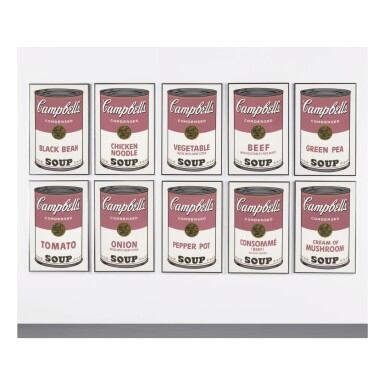 Property from an important European collection

The prints are in generally good condition except the red on each is faded, sometimes unevenly.

“The Campbell’s Soup Can was the Nude Descending a Staircase of pop art. Here was an image that became an overnight rallying point for the sympathetic and the bane of the hostile. Warhol captured the imagination of the media and the public as had no other artist of his generation. Andy was pop and pop was Andy” (Henry Geldzahler cited in: Victor Bockris, The Life and Death of Andy Warhol, London, 1998, pp. 159-60).

Warhol first explored the Campbell’s soup can as a subject in a series of paintings begun in 1961 that were exhibited by Irving Blum at Ferus Gallery in Los Angeles in 1962. The thirty two works in the exhibition - a quantity dictated by Campbell’s product line at the time - each measured twenty by sixteen inches and were arranged in a single line around the gallery on a grocery store shelf. The exhibition was the artist’s first solo show and although its impact was not immediately felt, it soon proved to be a pivotal moment in not only Warhol’s career but also the history of the Pop Art movement as a whole.

Now in the collection of the Whitney Museum of American Art, Campbell’s Soup Cans occupies a critical position in Warhol’s body of work. It is one of his first works to depict American consumer goods and to use serial images, and it is also one of his last to employ hand-painted canvases. His discovery of screenprinting as a medium shortly after the soup cans were completed transformed his artistic practice in creating both unique works and editions. The uniform, mechanical surfaces he sought in his paintings were far more easily and effectively rendered in screenprinting and allowed him to remove evidence of his hand from the process entirely.

In many ways, Campbells Soup I is the culmination of the ideals Warhol initially presented in the 1962 paintings. When he revisited the soup cans as an edition in 1968, Warhol’s use of screenprinting and a portfolio format refined and emphasized the objectives of the earlier work: to create an impersonal and mechanized aesthetic seemingly devoid of the artist’s hand and to use repetition and minor variation to underscore qualities of ubiquity, monotony and abundance in everyday visual culture. When considered as a group, the portfolio remains one of the most iconic images in Warhol’s entire body of work - an instantly recognizable symbol of not only the artist and the Pop movement but American art in the 20th century.