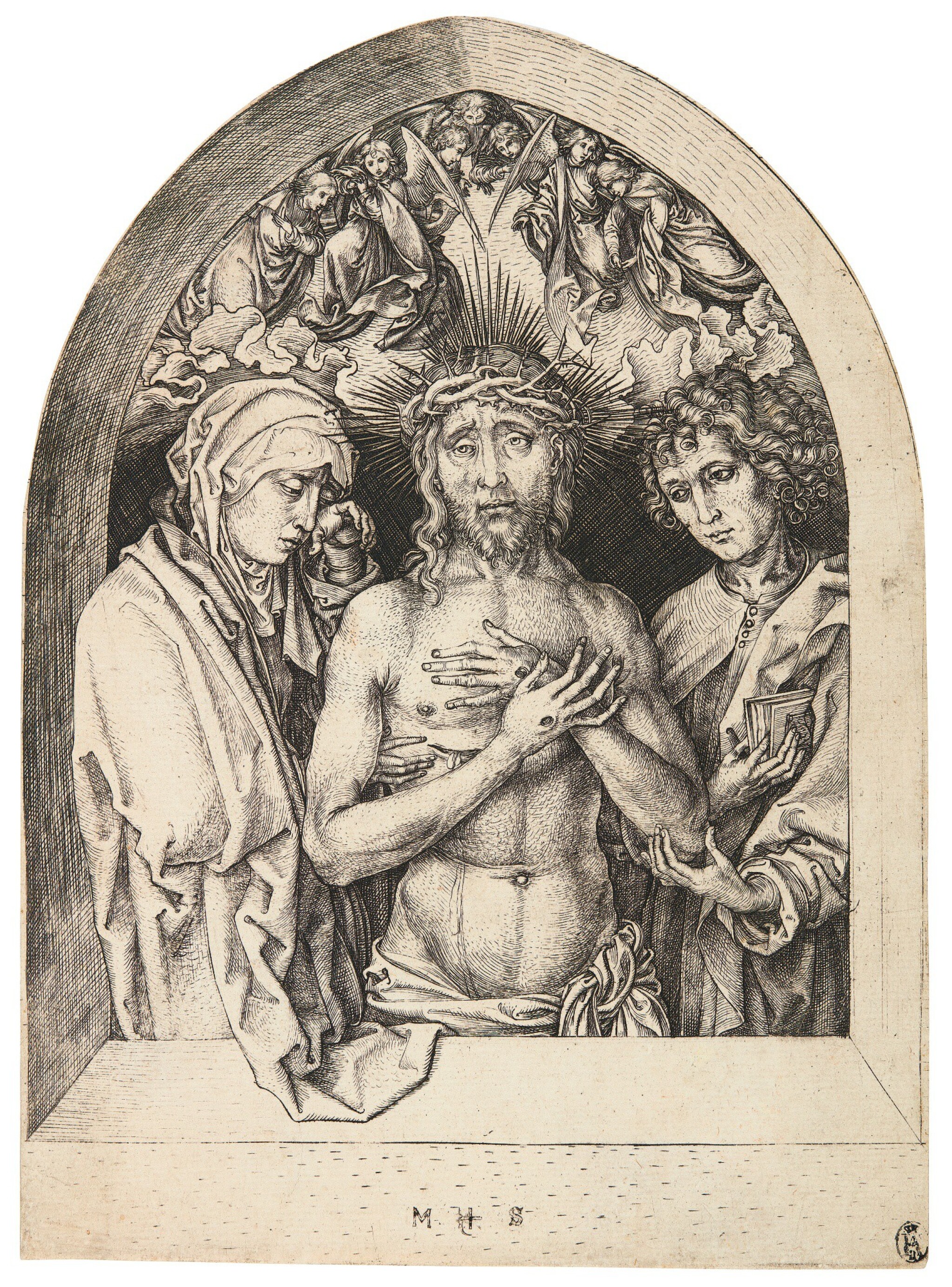 THE MAN OF SORROWS BETWEEN THE VIRGIN AND ST JOHN (BARTSCH 69; LEHRS, HOLLSTEIN 34)

Engraving, probably circa 1470-72, a very early impression, excellent in its effects and with only a little uneven printing towards some of the edges, at lower left, and with the monogram partly un-inked (not uncommon), on a Chancery half-sheet, watermark Bull's head with eyes and nostrils, single-line staff and X-cross, tied to a chainline (see note), trimmed to the window (as is the majority of extant impressions) but otherwise in unusually good condition, unframed

Trimmed on or just outside the plate mark below, trimmed outside the arch but within the stippled background at the upper sheet edge and sides, in good condition, unframed.

Please note that the text in the printed catalogue should state: ‘...In all there are eleven of this second state, including the Blum and present sheets which are the only ones not in institutions, and probably only the two (Berlin and Blum) which are absolutely complete.’

This print is one of Schongauer's earliest, probably amongst the first four to six he engraved. The reappearance of this impression is important in stimulating a better evaluation of a recorded sheet in the context of the few others extant, and for the new paper evidence revealed by its hitherto undescribed watermark. It is one of the very few surviving in an early and generally first-rate impression in good condition (most are also missing the spandrels and the narrow bands at the sides with the short horizontal flecks like the ones in the surviving strip at bottom in which the monogram appears). The Hollstein first state, before some small adjustments, is known in one impression, in Dresden; it is no doubt a trial proof, not very clearly printed, and is trimmed to the inner borderline. The only impression of the new second state to which Lehrs more or less justifiably awarded his three stars or 'rosettes' (***) is in Berlin; it is complete but has numerous condition defects. It is laid down so its watermark, if any, can tell no tales. Another impression recorded by Lehrs (then at Klein-Oels) was in the Blum sale, Sotheby's New York, 1988, lot 1017; it is complete and very good, but without watermark. The Paris BN impression is slightly trimmed and not attractive, the London impression not as good as the sheet here, and cut, stained and made up. In all there are eleven of this second state, including the Blum and present sheets which are the only ones not in institutions, and probably only the two (Berlin and Blum) which are absolutely complete. In the third state Schongauer cut off the lower part of the plate and placed the monogram on the balustrade; the M of the new monogram has the slant-sided uprights which he had started using about 1473-74, instead of the verticals as here. With one or two exceptions the surviving impressions are late or damaged, or both. That this change to the plate was the engraver's own work is certain as there are impressions with the Profile head twin watermarks, of the 1480s, which are found in later impressions of almost all his early prints and the earliest impressions of his major later ones (Lehrs 13 and 14).

An important attribute of this Friedrich August impression is that it has an identifiable watermark. Unlike the very similar Bull's head paper stock which Schongauer was to buy in about 1473-74 and use for the early pulls of a whole series of plates, this present sheet has the mark tied over a chainline, rather than between two chainlines as is much more common, and this peculiarity and some other notable characteristics make it certain that it is exactly the same as one found in a sheet in the Basel court archive (Gerichtsarchiv, folder B 9), dating from 1472 . I am often hesitant to use archival evidence, as opposed to that of a paper in printed books, as the latter often require large quantities which are usually bought and used as soon as practicable after manufacture since the cost of paper was proportionately by far the greatest expense a printer would incur; but in the case of a court archive, which would be busy in a town like Basel, the date evidence is more reliable as paper would not be left sitting around for long periods. The 1472 date is also eminently justifiable in the context of other paper evidence.

None of Schongauer's plates is dated, and attempts to establish a chronology have ranged from the fairly plausible to the wildly improbable. A cataloguer's notions change, even in the age of the digital cameras, as more impressions are seen; and distracting condition issues have to be 'seen through'. Lehrs (published 1925) relied in some cases on notes from the 1890s. Everyone makes mistakes; he did not recognise the unique Dresden proof, under his own care, for what it was, and he was wrong about this Friedrich August impression, then still also in Dresden, to which he quite unreasonably ascribes only one 'rosette' (p. 174, note 3).

The earlier plates are easy enough to establish as the M of the monogram, like the one here, has vertical sides. This group comprises eleven plates, including Hollstein 34 in the second state. After that, because there is no absolutely linear consistency in Schongauer's engraving style, extremes of opinion arise. What is important about paper studies is that, used intelligently, a linear pattern does emerge; in Schongauer's day the same paper was used for writing and for printing books and prints, so datable comparisons are available, particularly amongst incunabula printed in Basel, whence Schongauer's earlier papers came, and in towns down the Rhine. All the current paper evidence is consistent with the early dating of this group of plates. Lehrs had some inkling that knowledge of papers was a potentially important tool but beyond noting watermarks was not as rigorous as was Joseph Meder in his Dürer-Katalog (1932). Neither refers directly to contemporary uses in other media though Meder makes copious use of Briquet who is good as a general guide but ultimately frustrating, with his plethora of 'identical', or worse, 'similar' variants! Things have improved with radiographs replacing unreliable tracings which often don't show sewing dots (the unique and vital 'fingerprints' of a watermark) or chain-spaces (Briquet of course included the latter). Lehrs repeats watermarks by tracing the same one from different sides of a sheet (watermark nos. 44 and 45) and introduces ghosts (the twin Profile heads are nos. 70 and 72, while 71 and 73 do not exist).

Anomalies become apparent and have to be explained, and seldom cannot be; I wrote in the Hollstein volume that 'there is no ground for believing that the Gothic p and flower papers were used during Schongauer's lifetime', only for the earliest surviving trial proof, the unique first state of the Virgin and Child with a parrot (L. 37) in the British Museum, perhaps one of the two earliest prints (with L. 40), to be taken off its mount subsequent to our Hollstein publication (1999) and to have just such a watermark. But I can adjust my position by saying that to my current knowledge no edition or printing campaign, using Gothic p paper (which is like an 'own brand' product in a supermarket, rather than a proprietary one), can be shown to have taken place during Schongauer's life. He was a young man with, as yet, no market, had engraved one or two plates and had no need for a stock of higher quality paper from one of the top mills, such as he was soon to acquire. The earliest impressions of the famous Censer are printed on this soon to be bought Bull's head paper, which was used in printed books, not after 1474, so to find a recently assigned date for this plate as 'circa 1490' is patently absurd.

Lehrs 37 and 40, and the first state of the Tribulations of St Anthony, exist in very beautiful impressions printed on paper of circa 1469-73. The large tranche of new Bull's head paper, alluded to above, is found in at least one Chancery folio volume printed in Basel, not after 1474. It was used by Schongauer to print many if not most of the early impressions from plates with the vertical M: Lehrs and Hollstein 5, 6, 7, 16i, 54ii, 105, all the veritably early impressions with visible watermarks (and these are new, larger plates requiring a full sheet of paper for printing), but also impressions of plates with the newer monogram with the splayed M: 106 (large), 109, 115. Further stocks used to print several other plates not usually associated with this period are found in other Chancery folios printed in Basel, also around 1474. Even allowing for a greater paucity of early impressions in some cases, and other variables, this still implies an astonishing and concentrated burst of activity on Schongauer's part, to be followed by the production of the twelve plates of the Passion series which was almost certainly engraved around 1474-75.

We are grateful to Nicholas Stogdon for help in cataloguing this lot and for the foregoing note.