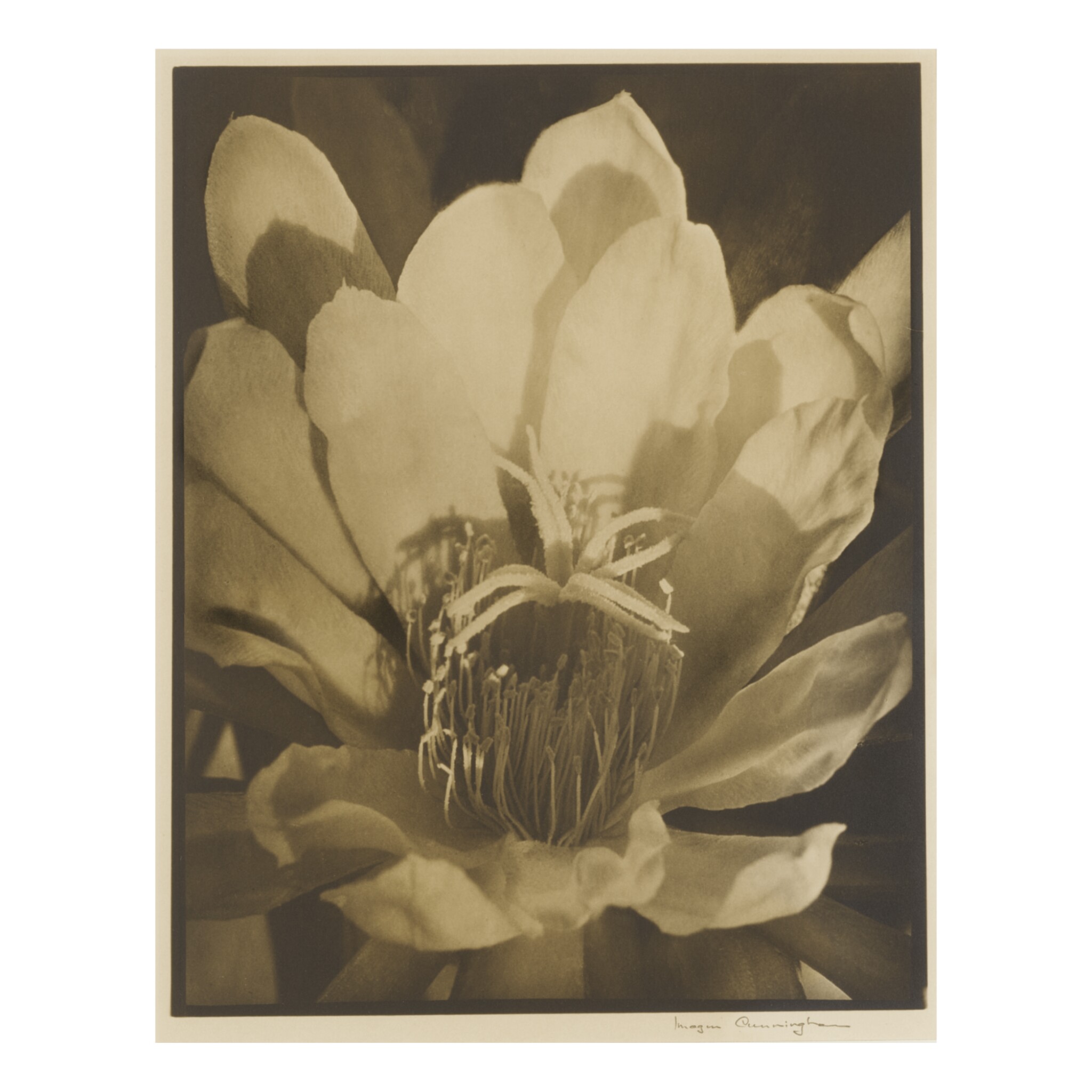 warm-toned, signed in pencil in the margin, framed, circa 1926

This impressive, large, warm-toned print, on stiff double-weight matte-surface paper, is in generally excellent condition. Close examination of this print reveals a world of detail of the night-blooming cereus - from the profusion of delicate stamen at its center to the illuminated, recently unfurled velvety petals.

This print is exceptionally clean and crisp. In high raking light, very faint age-appropriate silvering is visible in the darkest areas of the image. Upon very close examination, there is a small eraser-head-sized area in the lower right quadrant that appears slightly more matte. The photographer's original retouching of the negative is subtly visible upon close examination and is not a physical feature of the present print.

The photographer's graphite signature in the margin remains robust. The margins are very slightly sunned at the periphery of the image. There is minor wear along the edge of the left margin. There is a very thin darkened band along the upper and right extreme margin edges, an original result of darkroom processing.

The photographer to Else Marie Anthon Frye

The luminous photograph offered here is an early, possibly unique, print of Imogen Cunningham’s study of the flowering Epiphyllum Oxypetalum, with its delicate multilobed stigma at center and its velvety, unfurled petals. Known by many names, including ‘Orchid Cactus,’ ‘Dutchman’s Pipe’ and ‘Queen of the Night,’ this cactus flowers infrequently but exudes a heady vanilla fragrance in bloom. Like Cunningham’s iconic Magnolia Blossom and Georgia O’Keeffe’s large-scale, sumptuous flower paintings (fig 1.), the present photograph transcends simple documentation and offers a sensuous, larger-than-life view of the inner part of the cactus blossom.

Cunningham’s skills in translating onto photographic paper the textures and vibrancy of the botanical before her camera first won her international acclaim when eight of her plant photographs were shown in the seminal Film und Foto exhibition held in 1929 in Stuttgart. Cunningham’s decades-long status as an important American Modernist is largely due to the distinct nature and significance of her oeuvre of plant form photographs.

Cunningham scholar Susan Ehrens has noted that an image titled Cactus Blossom is among a selection of Cunningham photographs exhibited in early 1930. A photograph by this title was shown in her one-person exhibition at Harry Hartman Booksellers in Cunningham’s native Seattle (February and March 1930), and subsequently at the Deny-Watrous Gallery in Carmel (April 1930). Cunningham’s exhibition records also list Cactus Blossom among 9 photographs she sent in May 1930 to the Cactus and Succulent Society of America Second Annual Show held at the Ambassador Auditorium in Los Angeles.

This masterfully-rendered enlargement is monumental in both composition and physical scale. The blossom’s anatomy fills the frame, revealing Cunningham's dual passions for both science and the aesthetics of the camera. Rigorously trained in the science of photography and technically proficient in the darkroom, Cunningham was praised for her enlargements at a time when contact-printing negatives was widely practiced and favored. Pioneering New York gallerist Julien Levy offered the following glowing commendation in his letter to Cunningham: ‘Usually I object to any enlargement whatsoever. I have persuaded many to make even 4 x 5 contacts they prove little gems much preferable to the “blown up” version. However with your photographs I should reverse my advice and say that the larger the better. Your negatives seem to have such fine quality and you enlarge so carefully that your subjects seem to gain dramatic interest in 11 x 14’ (4 February 1932).

This photograph is on the warm-toned, matte-surface paper Cunningham favored in the 1920s. It comes originally from the collection of Else Frye (1884-1962), who graduated with Cunningham from Seattle High School and later married Dr. Theodore C. Frye (1869-1962). As a Chemistry major at the University of Washington, Cunningham had supplemented her college income by making lantern slides for the Botany Department directed by Dr. Frye. Several plant species were named after both Dr. and Mrs. Frye, and in Cunningham’s well-cultivated Green Street, San Francisco garden, she would draw visitors’ attention to the Rhododendron ‘Else Frye’ that had been named ‘for an old friend in Seattle’ (Elizabeth McClintock, ‘Imogen Cunningham and Her Plant Portraits,’ Fremontia: A Journal of the California Native Plant Society, July 1978). Cunningham and Else were lifelong friends and surviving correspondence reveals a strong, mutual affection. In an emotional letter posted mere days before Else’s death, Cunningham wrote ‘For a long time now, I have been writing you mental letters but have finally decided that this is not enough. . . I can only say that all these years I think of you often. . .’

At the time of this writing, no other print of this image has been located.