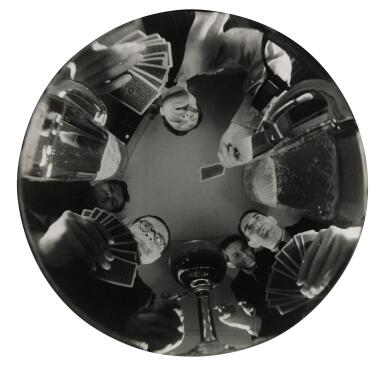 Vintage ferrotyped silver print. Signed, dated and annotated in pencil by Phyllis Umbehr with the artist's copyright stamp on the verso.

This silver print is in good to very good vintage condition. Printed on Agfa-Brovira paper. All corners a little bumped, two with pin holes, one teared, one with small loss of emulsion; small lifting of emulsion in a few areas along edges of print; two small handling marks in the margin; all of which not affecting image. Some very small scratch lines and indentation marks as well as a couple of tiny handling creases visible in raking light across print and as expected with ferrotyped prints. A couple of white specks in the negative.

UMBO, the moniker chosen by artist Otto Maximilian Umbehr, is regarded as one of the most important photographers of the Bauhaus and Modernist movements. After being expelled from the Bauhaus school he began documenting the bohemian lifestyle of Berlin in the 1920s. It was then that he developed his avant-garde style in photography as clearly represented in these two vintage prints, Tea for Two, 1935 and Skatrunde, 1935.

In a tragic incident resulting from an air raid in 1943, UMBO’s studio and archive were completely destroyed, losing over 60,000 negatives. As a result, these rare prints hold an additional historical value, attesting to the merit of his legacy and early oeuvre. Claudia Perren, director of the Bauhaus Foundation Dessau, explains, ‘Besides László Moholy-Nagy, UMBO is still regarded as the Bauhaus photographer.’