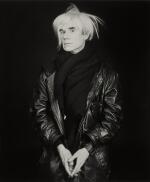 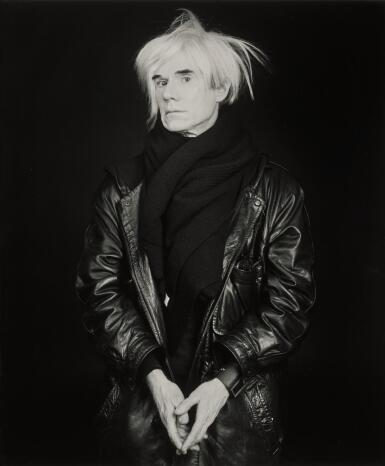 Silver print, printed 1986, dry-mounted to card. Signed, dated on the photographer's copyright stamp and titled, dated and numbered 2/10 in ink in an unknown hand on the reverse of the card. Mounted and framed.

This silver print is in overall excellent condition. Corners very slightly rubbed, away from image. A couple of faint superficial indentation lines near lower left corner, hardly visible and only in raking light.

Over the years, Robert Mapplethorpe and Andy Warhol met numerous times in both social and professional environments. Mapplethorpe, as his muse Patti Smith recalls, ‘loved Andy Warhol and considered him our most important living artist. It was as close to hero worship as he ever got’.

Having previously taken Warhol’s photograph in 1983, this silver print, Andy Warhol, 1986 depicts the artist in a more relaxed manner than he had shown in his earlier images. This is due to the augmented respect Warhol had grown for the photographer over the years, seeing him more as an equal as opposed to yet another follower. Furthermore, near the time of Warhol’s death in 1987, just a year after this photograph was taken, Mapplethorpe explained, ‘I think he was finally becoming much more human somehow and he was voicing what he really thought as opposed to what people would react to. I think that was sort of one thing that I was really shocked about, that he died at a moment when I think he was finally sort of feeling comfortable somehow.’

At the time Mapplethorpe shot this image, portraits played a central role in his practice. That same year he was commissioned by curator Richard Marshall to take portraits for the book 50 New York Artists. The publication featured his images of the most relevant artists of the time including Jasper Johns, Willem de Kooning, and of course Warhol.