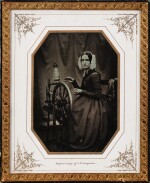 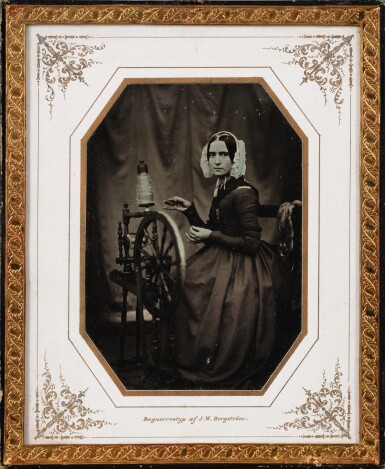 JOHAN WILHELM BERGSTRÖM | PORTRAIT OF THE PHOTOGRAPHERS WIFE AT THE SPINNING WHEEL, 1844-1852

JOHAN WILHELM BERGSTRÖM | PORTRAIT OF THE PHOTOGRAPHERS WIFE AT THE SPINNING WHEEL, 1844-1852

PORTRAIT OF THE PHOTOGRAPHERS WIFE AT THE SPINNING WHEEL, 1844-1852

in its original mount, with a modern seal, with an annotation on a label on the reverse by Olga Bäckström, wife of the photography professor and collector Helmer Bäckström (1891–1964)

To request a condition report for this lot, please email laura.borsik@sothebys.com﻿

By descendance of the photographer to John Hertzberg (1871–1935)

Olga Bäckström, the wife of the previous owner

JW Bergström was one of the first Swedish daguerreotypists. Initially trained in glass crafts, he opened his daguerreotype portrait studio in Stockholm in 1844, which was very popular for a decade. The local press already praised Bergström’s work in 1845: "While many artists from all countries are constantly working on the progress of the daguerreotype, it is a pleasure to bring to the attention of the public, that a Swedish has already managed to bring this art to perfection "(Aftonbladet, 05.09.1845)

He had local recognition through several medals and awards, but was also the representative of Sweden industry products at the Universal Fairs in London in 1851 and Paris in 1855. Bergström later gave up this photographic studio as he became very successful in the glas industry. His photographs were exhibited in the first Nordic photographic exhibition in Stockholm in 1920 and appear in the periodicals that considered him "the highlight of the Swedish daguerreotype" (Nordisk Tidskrift för Fotografi, nr 66, 1922, p.147 ) A self portrait of JW Bergström with the same format and presentation as the present lot is in the collections of the Museum of Modern Art in Stockholm.

This striking portrait of Charlotta Bergström in her working moment at the spinning wheel is given movement by the newly spun linen thread through her fingertips depicted with exceptionally precise details. It is a very rare example and one of the most significant early Swedish daguerreotype portraits.