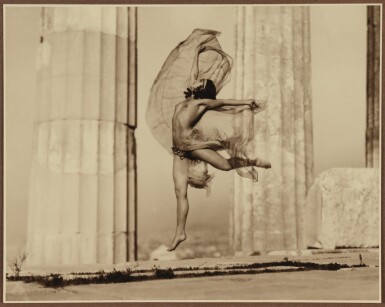 titled and credited 'Nelly's Athènes' in pencil on the mount below image, with copyright stamp on the reverse

Born in Anatolia in 1899, in 1920 Nelly (née Elli Souyoultzoglou) moved to Germany, escaping from the destruction of her homeland in the wake of the First World War. In Dresden she originally studied art but then switched to photography, first studying under the leading portrait photographer Hugo Erfurth and then under Franz Fiedler, a former student of Erfurth's. It was through working in Fiedler's studio that she came to specialise in dance photography.

In 1923 Nelly assisted Fiedler with studies taken en plein-air of dancers from the Mary Wigman school of expressive dance. This avant-garde dance movement, originally known as 'artistic dance', equated freedom of movement with freedom of spirit. Dancers performed barefoot and with loose-flowing clothing. When Nelly returned to Greece and, in 1925, opened her own studio in Athens, she continued with her dance photography to controversial effect.

The exultant pose of the Hungarian dancer and musicologist Nikolska in this image taken in 1929 is both a tribute to expressive dance and an exuberant response to Nelly's first series of dance photographs, taken on the Acropolis in 1927 and published two years later in the French journal L'Illustration, were identified by some as a desacration of this historic site.

Nelly's 'atelier artistique' (from which this print was issued) was at 18 Rue d'Hermès in Athens. French was the language used by the upper classes in Athens at this time. The distinctive mounting of the photograph was done according to Nelly's instructions.