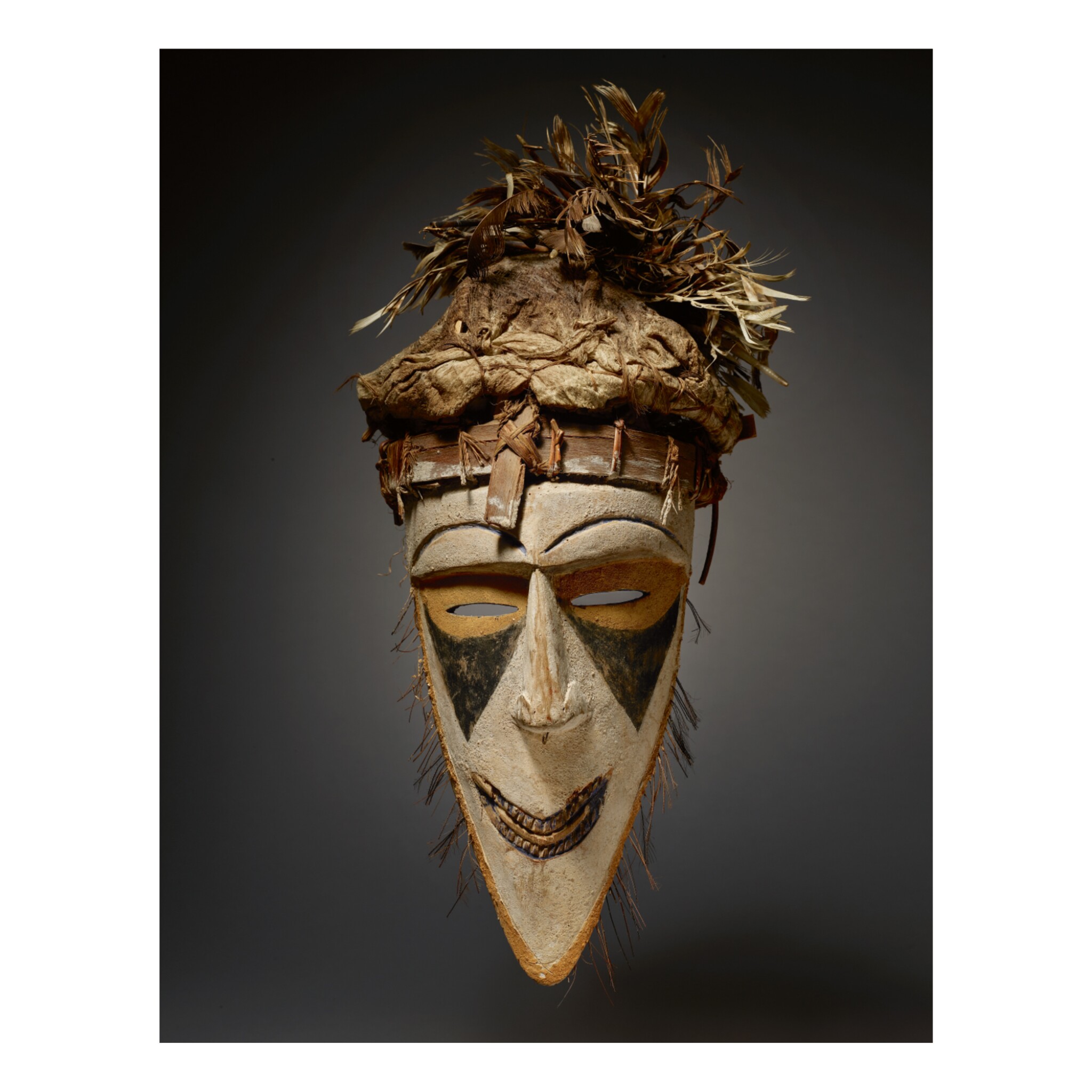 First made famous in the west by the surrealists André Breton and Paul Eluard, the art of New Britain is characterized by its delicate, colorful, and imaginative forms, which as Ingrid Heermann notes, the surrealists prized for "tapping apparently effortlessly into the very wellsprings of being, the subconscious, and the dream." (Heermann, Form, Colour, Inspiration: Oceanic Art from New Britain, Stuttgart, 2001, p. 6).

The present mask is one of the highest expressions of this spirit, exuding a joyous, dreamlike brightness. In a light, cheerful palette of white, yellow, and blue, the face is depicted with a satisfied smile, elegantly arching eyebrows and eyes that seem also to smile in their softly squinting shape and position. The face is reduced to its essential elements in a geometrically balanced series of triangles and arches, echoing one another in the form of the wood and shapes indicated in paint. The whole is crowned with an elaborate fibre cap and a boisterous eruption of eagle feathers.

According to Heermann, among the Tolai "wooden dance masks [...were] called lor. Parkinson called them death-masks that appear in spirit dances. Julie To'Liman-Turalir defines them by the dances in which they are used in performance, in which 'creeping spirits' appear or are represented. The two definitions need not necessarily be contradictory. Parkinson is referring to the context in which the objects were used; that is, mortuary ceremonies or ceremonies commemorating the dead following funerals and the concomitant transactions - for example, 'cutting' and distributing ropes of shell currency. Slit gongs (garamut) are played, dances are performed and songs sung to console mourners for their loss and put them in a cheerful mood again. To'Liman-Turalir, on the other hand, is referring not to the occasion but to the spirit beings embodied - 'creeping spirits' (kakakao), for whose appearance lor masks are used. The 'Dance of the Creeping Spirits' is a dance to which high status is accorded. It can only be performed by men." (ibid., pp. 37-38).

She continues (ibid.): “From the Tolai point of view, people, regardless of what their merits in life were, go on into another existence when they die, and become spirits (tambaran or tabaran) or the abovementioned kaia or tutana vukarit beings, who ‘live eternally’. They are not conceived of as disembodied spirits or souls, as the name might suggest. On the contrary, they are thought of as having a physical, bodily existence in which they reproduce the social and cultural aspects of society on a different plane. The transfiguration of persons into higher spiritual beings can take place days before they die; the bodies they leave behind are regarded as empty shells. Spirits usually remain invisible to the living. They can, however, manifest themselves in various guises; for instance, as human beings or animals. Their existence is rendered visible in a ceremonial context with the aid of masks and dances.”

“Two types of lor masks can be distinguished. One type, of which in some only the face is preserved (cat. nos. 18 and 19 [see Figs. 2 and 3]), resemble skull masks in form and conception. They are painted white, and the flattened contours are emphasized by coloured lines. The mask in cat. no. 15 [see Fig. 4] seems to be a special case: the face is quite small and is topped by a mask hat of bast, surmounted by two entwined serpents. Unlike the masks that are just faces, this one sports nose jewelry of the type worn by some skull masks. Remarkably, when these masks are used in performance, the bodies of the dancers are not covered yet are painted, at least on the chest […] [see Fig. 5]. Painting of this type in the form of a polychrome, elongated triangle, seems to be typical of ritual observances, and also occurs on some of the small effigies, which may possibly have been used in connection with the practice of magic. Like the second type of mask, this mask has a ‘smiling mouth’, which is emphasized by the painting on the chin. Mask cat. no. 17 [see Fig. 6, collected together with and probably by the same hand as the offered mask] also belongs to this type, although the facial lines have been drawn more lightly and the surfaces formed in a more sophisticated manner than on most exemplars found in other collections. Its helmet of vegetable fibre, which the other face masks probably also originally had, shows that this mask is related to the tatanua masks of neighboring New Ireland.”

The corpus of pre-colonial Tolai art from New Britain is extremely small. Already by 1904, when the Tolai secret society, iniet, was officially banned by German colonial officials, there was a sense that the pre-colonial culture on the island was irrevocably changing, and the artifacts of those cultures becoming scarce. The German colonial governor, Dr. Albert Hahl (1868-1945) wrote to Felix von Luschan, director of the Berlin Völkerkundemuseum: “Ethnographic objects are becoming rare and expensive. Do send your expert collector, who was announced to me by Mr. Thilenius [director of the Hamburg Museum für Völkerkunde], very soon. He may still salvage the remainders of a bygone time and culture.” (ibid., p. 196).  By about 1910, Tolai artists had responded to the demand, and as Heermann notes, "We can assume that, during this period, the Tolai themselves, both on the coasts and the adjacent hinterland, were exploiting the Europeans’ interest in masks and dance accessories to add to their income by selling carvings." (ibid.). Thus Tolai masks that were certainly made for the purpose of ritual use within their culture of origin, firmly dated to the late nineteenth or early twentieth century are extremely rare, as compared with the corpus of carvings from neighboring New Ireland. Furthermore, due to the ephemeral nature of the materials used in most New Britain masks, very few have survived, certainly few which remain as well preserved as the present mask.

According to Harry Franklin’s records, this Tolai mask was in the collection of the Herz-Jesu (The Most Sacred Heart of Jesus) Missionary Museum in Hiltrup, Münster. A German missionary society, the Sacred Heart society was first started in the Tolai area by priests who travelled to New Britain as part of the Marquis de Rays expedition in 1882. More missionaries from the society travelled to New Britain in 1888, and their activities in the region increased in the following years. Members of the society collected a number of objects in the late 19th and early 20th century which were sent back to the society's museum in Hiltrup in the German city of Münster. Although the date when the present mask was collected is unknown, its appearance and quality suggest that it was probably amongst the masks collected during that period.