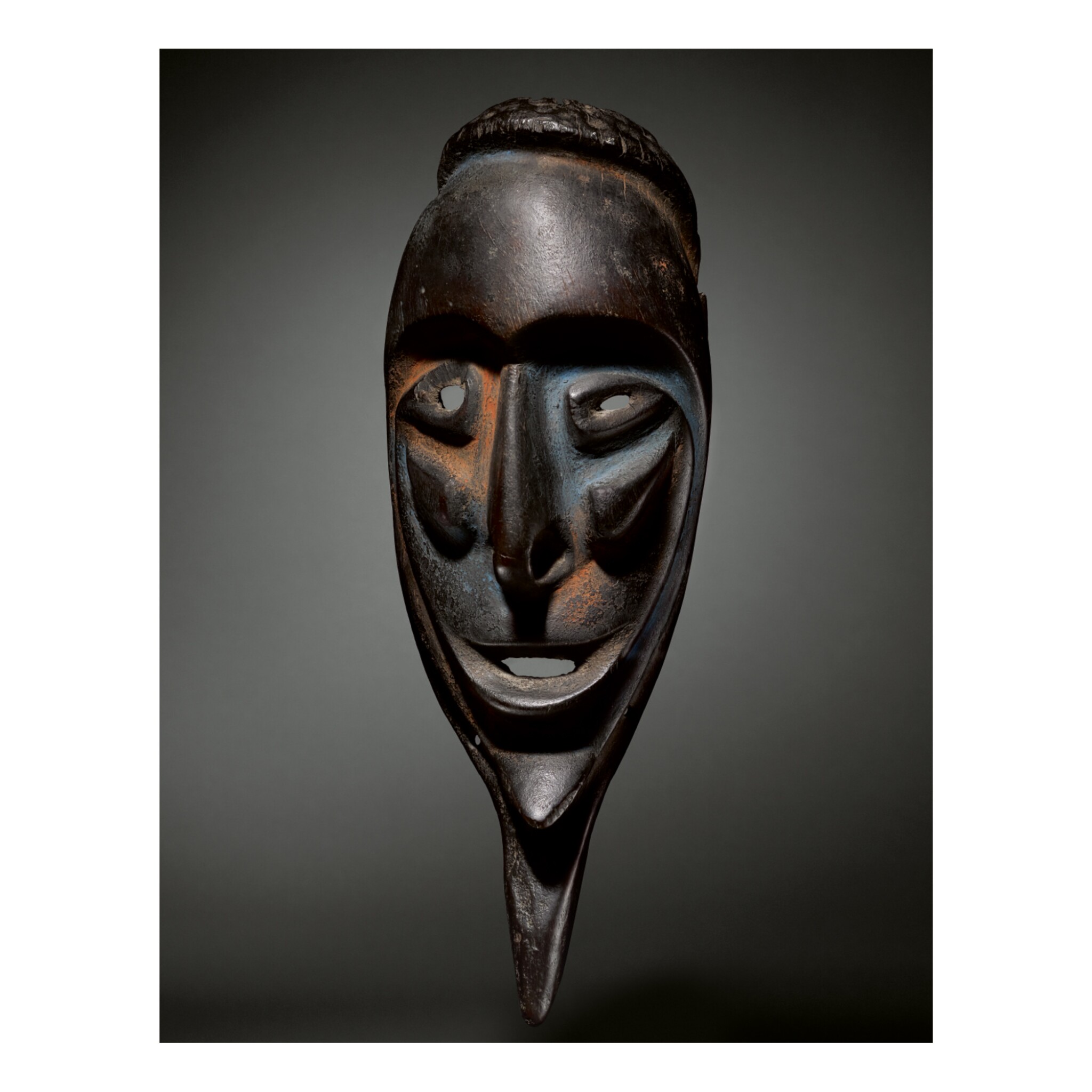 Harry A. Franklin, Beverly Hills, acquired at the above auction

Museum of Cultural History Galleries, University of California, Los Angeles, Image and Identity: The Role of the Mask in Various Cultures, April 11 - June 3, 1972

While some masks are covered with a thick, cracked patina, others, such as the present mask, have a smooth and shiny black patina, covered in a light layer of encrustation. The masks were kept in the men’s house to preserve them from insect damage. A few days before the ceremonies took place, the initiates would take the masks to the forest where, in a clearing, far from sight, they would clean the soot of the men’s house from the masks and repaint them.

On the day of the ceremony, four of these masks, accompanied by two conical masks, would emerge from the forest. The masks were danced in the village square, scaring the boys and women. The dance, which took place in April, celebrated the beginning of the yam harvest, the tubers which were then maturing in the gardens. The ceremony was one of the most important aspects of village life, beginning a period of abundance and exchange.

Dances related to the harvesting of yams were abandoned from the late nineteenth or early twentieth century as a consequence of the people’s conversion to Christianity. Devoid of the purpose for which they were made, the masks were sold to European settlers and travelers. The rapidity which with the traditional were abandoned en masse means that the small number of known masks are unquestionably old.

Under the high and smooth brow of this mask, the face is formed of a complex play of lines and curves. The straight nose has a large pierced septum. This framed by two small tear shaped reliefs. The eyes are extended by a line which emphasizes the outline of the face in an elegant curve. The mouth sketches a shy smile. The lower part of the face has a curious protuberance which forms a sort of goatee beard at the base of the chin. Beneath this appears a tenon which the dancer would use to hold the mask in front of his face. Traces of red ocher and blue pigment remain visible under the eyes and above the mouth.

The style of this mask is characteristic of those made in south Pentecost island, and this example is one of a small group which are characterized by their masterly sculptural quality. The intelligence with which the features are arranged confers upon the mask a power which is both eerie and disquieting, quite in accordance with the mask’s function and its power to materialize the presence of the ancestors.