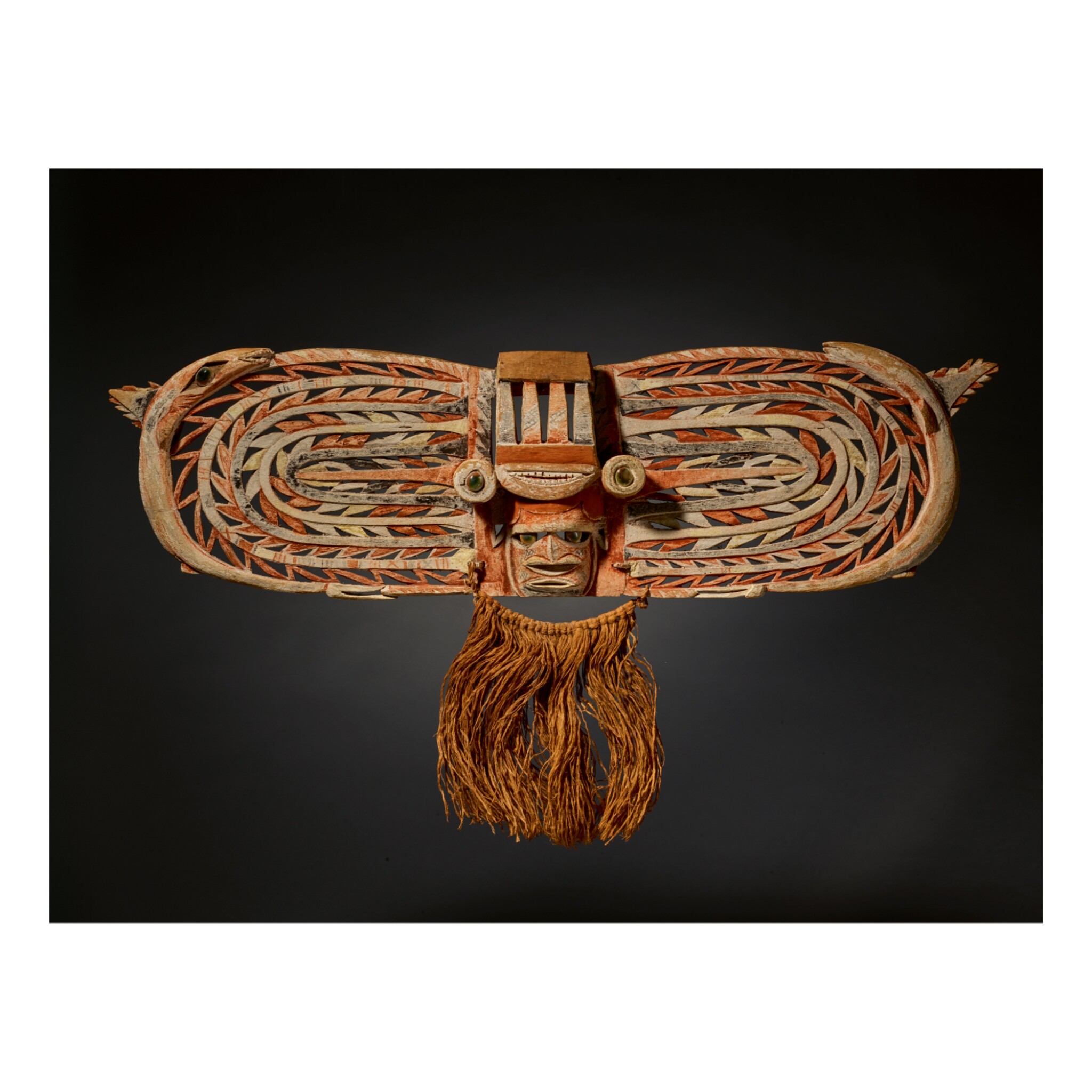 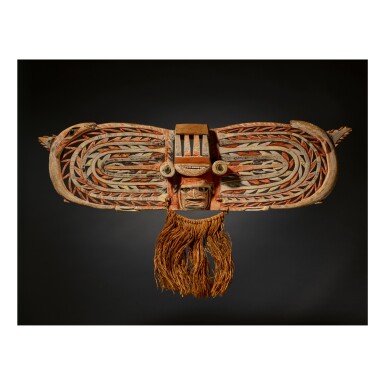 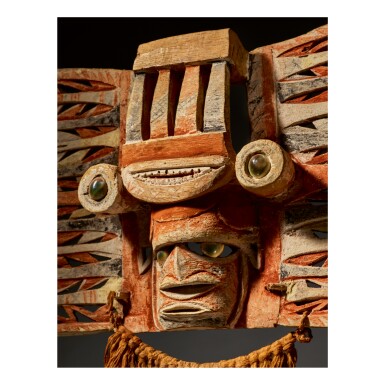 AN IMPORTANT MASK FOR THE KIPONG CEREMONY

In northern New Ireland, the ritual life and the social organization of the clans were orchestrated by long and complex funeral ceremonies called Malagan. These highly codified and structured practices were sometimes complemented by other rites and dances, the most important of which were known as Kipong. Within the framework of the Malagan and Kipong institutions, an extraordinary diversity of statues, objects and masks with very specific functions were created, sometimes for a single use of a few minutes. It should also be noted that at the heart of these institutions, there were also local specificities, sometimes shared only by a few clans or villages. For instance, there were dances where a certain mask was used, which could only be owned by one clan, while others could be more common.

For both the Kipong and the Malagan ceremonies, the dances were normally executed just outside the funerary enclosure, in the village square, which was shared by all the inhabitants. We have one account and a field photo of a dance of this type, recorded by Augustin and Elisabeth Krämer on February 23, 1909 in Hamba (present day Libba) on the northwest coast of New Ireland, lying across from the Tabar Islands and close to the Uli country. Hamba had a strong Malagan tradition. In the field photo one can see two dancers wearing horizontal planked masks, facing two dancers with hornbill mouth pieces.

The present mask has very fine frieze carving, adorned by two fishes. The central part is composed of a human head, under a large mouth flanked by two eyes. In the past, the mask was fixed to a helmet like structure made of cane and fibers. We have identified six masks sharing all these characteristics, all probably belonging to the same tradition. They were all collected before 1901, five of them by exploratory voyages and one by the planter Richard Parkinson; all but one are now in the Ethnologische Museum, Berlin.

Three of the masks were collected on Nusa Island. The first was collected before 1883 by Otto Finsch during an exploration trip funded by the Humboldt Foundation (inv. no. VI 6199; Helfrich, Malanggan - 1: Bildwerke von Neuirland, Berlin, 1973, pl. 132). The two others were collected in 1893-1894 by Karl Ribbe (inv. nos. VI 12403 and VI 12405; ibid., pls. 128 and 130). Ribbe was a very active collector for the Berlin museum, and was, for a short period of time, based in Nusa as an agent of Hersheim & Co, the trading company. Two of the masks were collected by the crew of the Imperial Navy survey vessel SMS Möwe, which was mapping the coast of the Bismarck Archipelago. The masks entered the collections of the Ethnologische Museum in 1900 (inv. no. VI 18564; ibid., pl. 131, and inv. no. VI 18565, now in the ethnological collection of the Georg-August-Universität in Göttingen as inv. no. Oz 1863). Finally, there is the mask collected by Parkinson in the Ethnologische Museum (inv. no. VI 20475).

We have, therefore, a small corpus of masks which share closely similar characteristics. They were all collected by 1901, and all probably originate from a very small group from northern New Ireland, either on Nusa Island or between Nusa and Kapsu. Although at present we have not identified the collector and original museum collection for the mask offered here, we think it belongs to this small corpus, while noting that its carving and painting is much more refined than the others.