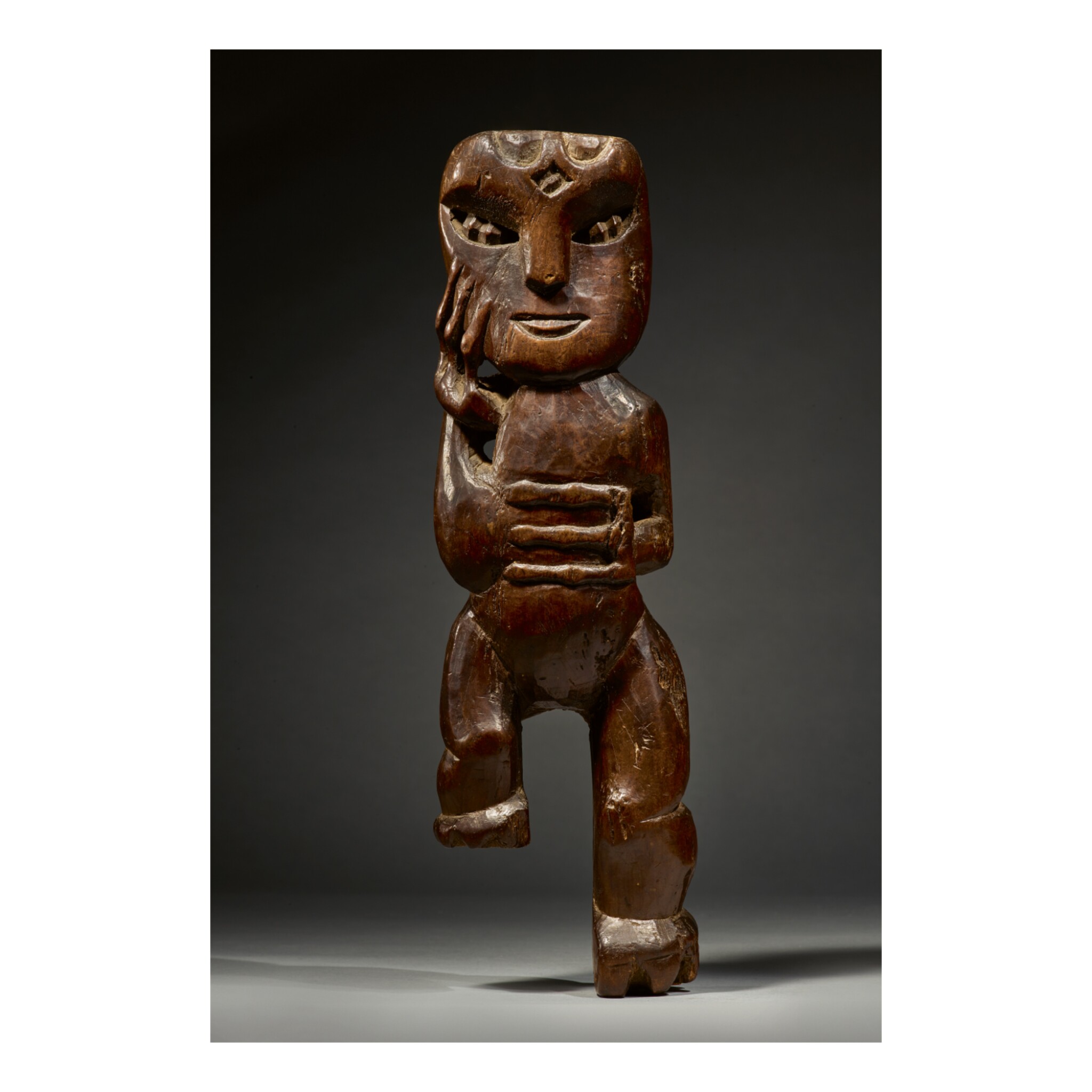 Upon first seeing this fascinating sculpture, Roger Neich, the great specialist in Maori art, immediately identified it as a “dancing figure”. His attribution is clearly supported by both the pose of the arms and the highly distinctive shortened and “raised” form of the proper right leg, which together give the unmistakable impression of a figure in the act of performing a haka, the ritualized dance of challenge.

Carved fully in the round, the overall style identifies this sculpture as the work of an Arawa artist from the North Island of New Zealand. The distinctive style with the proper right shoulder placed very low on the torso and the hand raised to the face can be seen in a number of Arawa sculptures, including a house post figure, or amo, in the Metropolitan Museum of Art, New York (inv. no. 1979.206.1508), and a superb 18th century tekoteko from the Oldman collection, now in the Museum of New Zealand/Te Papa Tongarewa, Wellington (inv. no. OL000150; illustrated in Oldman, The Oldman Collection of Maori Artifacts, Auckland, 2004, pl. 85, cat. no. 150). Here the fingers of the raised proper right hand are depicted with great delicacy, each clearly separated from the other by deep, carefully chiselled openwork carving. The style of the eyes, which are also deeply carved, can be seen in several Arawa sculptures, including a lintel, or pare, illustrated in Edge-Partington (An Album of the Weapons, Tools, Ornaments, Articles of Dress etc. of the Natives of the Pacific Islands, London, 1969, vol. 2, pl. 151); Anthony Meyer notes that it was “reputedly carved by Master-Carver Wero Tarol of Rotorua iwi, Te Arawa” (Meyer, Oceanic & Eskimo Art, Paris, 2013, n.p., cat. no. 16).

Whilst much of the style of the figure is, therefore, recognizable, the shortened leg is not only distinctive but, to our knowledge, probably unique. The singular character of the sculpture raises the question of what purpose it was originally made for. The underside of both feet and the top of the head retains some traces of red ochre, kokowai, and there are no signs that the figure was removed from a larger architectural sculpture. The hole pierced through the back and top of the head suggests that the figure may have been suspended. This idea, as well as the dancing pose, may at first glance suggest a connection with the marionettes known variously as karetao, karaii, and tokoraurape. However, karetao invariably have articulated arms which were manipulated by cords, causing them “to quiver in imitation of a person performing a haka, or posture dance, a vibratory motion termed whākapakapa” (Best, Games and Pastimes of the Maori, Wellington, 1976, p. 170).

An intriguing inscription on the back of the head, which reads “Te Mokomokai, Rotoiti December 1882”, provides further evidence for an Arawa origin, but does not give any further clue as to the sculpture's use, since it is hard to discern any connection to the tattooing practices of tā moko, or mokomokai. Whilst its original function remains enigmatic, this dancing figure nevertheless stands as a fascinating illustration of the inventiveness of Maori artists.