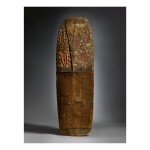 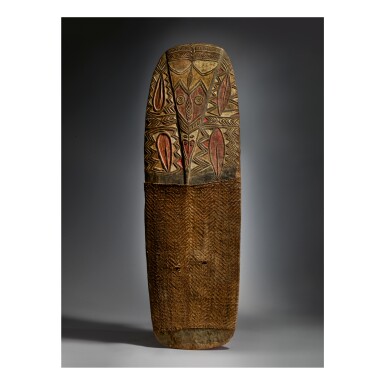 Friede notes that "the design of Kominimung shields is characterized by a slightly raised, central triangular panel filled with motifs while flanked by [...] motifs placed in a symmetrical fashion. The face of an important ancestor is always carved prominently on the central panel. The motif on the side panels is specific to a particular family [...] such a clan emblem usually represents a totemic animal, more rarely a plant or cosmic symbol, related in a mystical way to the clan of the shield bearer." (Friede, ed., New Guinea Art: Masterpieces from the Jolika Collection of Marcia and John Friede, San Francisco, 2005, vol. 2, p. 101, text to cat. no. 126). Such shields were used in warfare, but when not in use they were displayed on the walls of men’s houses. Rather than a carved handle, these shields were held by a carrying strap attached to the plaited matting which covers the lower portion of this shield. Friede notes that this method of carrying the shield enabled the bearer "to move deftly while holding a spear in his right hand." (ibid.)

See Friede, ed., ibid., vol. 1, p. 150, cat. no. 126, for a related shield which was in the collection of the surrealist Roland Tual by the 1920s; and Philippe Peltier, ed., Shadows of New Guinea: Art of the Great Island of Oceania from the Barbier-Mueller Collections, Geneva, 2006, p. 363, cat. no. 181 for the Kominimung shield, lacking most of its plaited matting, in the musée Barbier-Mueller, Geneva (inv. no. 4062). Three examples in the collection of the Ethnologisches Museum Berlin were collected in 1912-1913, whilst another in the same institution was collected in 1896, attesting to the considerable antiquity of the style (see Kelm, Kunst vom Sepik III, Berlin, 1968, n.p., cat. nos. 401-404).