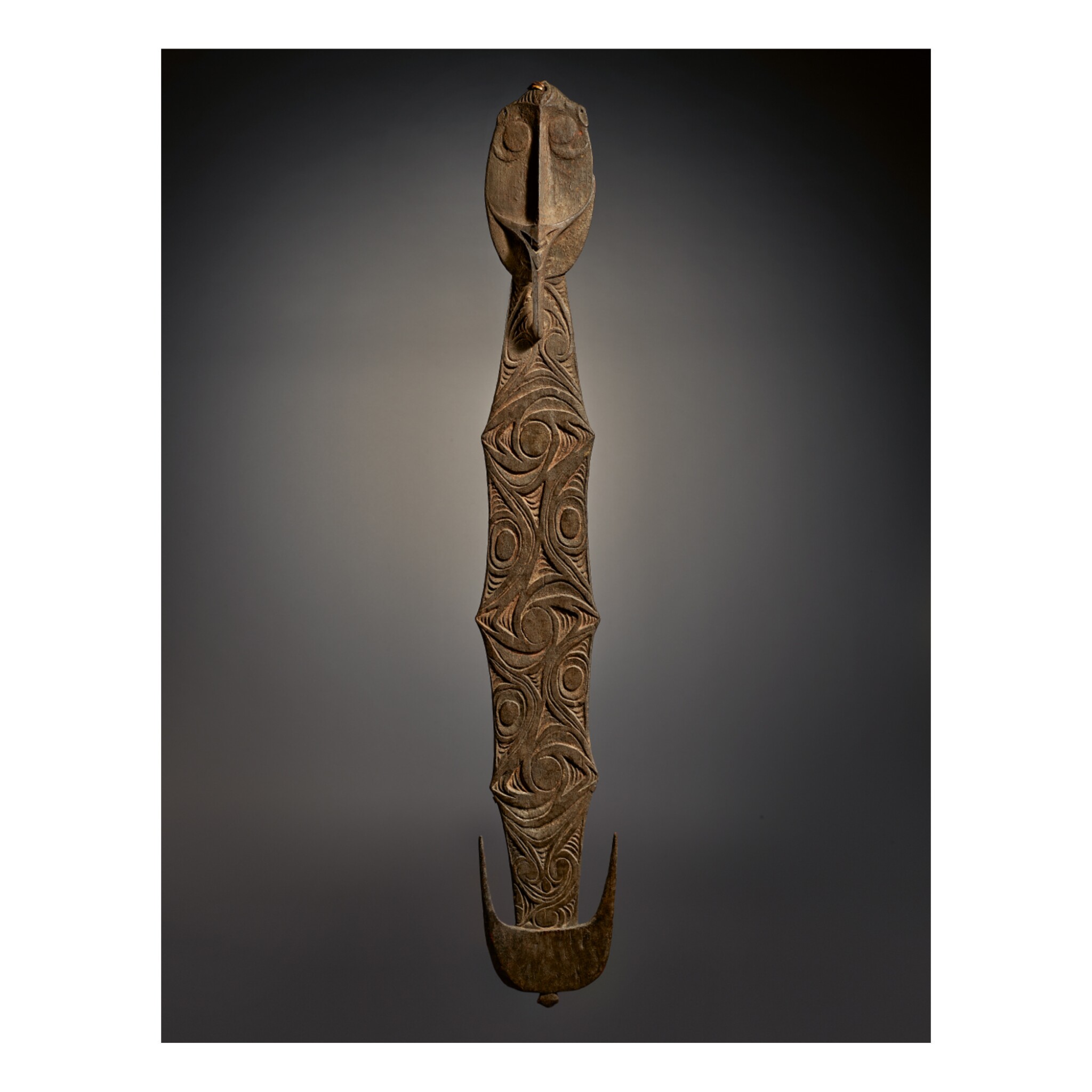 The suspension hooks of the Blackwater River area are distinguished by their low relief carving of curvilinear and geometric abstract designs. This fine example simultaneously combines a utilitarian function and a symbol of clan identity. Similar hooks were seen and collected by members of the Kaiserin-Augusta-Fluss Expedition and published by Otto Reche (see Reche, Der Kaiserin-Augusta-Fluss, Hamburg, 1913, p. 171, figs. 112 and 114, and p. 173, fig. 115). It is among the classic forms that hooks from this region use, a tri-part flat shape with a similarly narrow head, elongated body where the elaborate relief design is carved and a proportionately narrow hook at the bottom. A feature that distinguishes the hooks from this area is the carving on both sides of the hook which is often nearly identical. The swirling designs that appear to continually move circular shapes from top to bottom recalls motifs from other areas such as the abstracted designs on malu boards from the neighboring Sawos people. The sculpture includes a hole at the top that enables a rattan loop to be attached to facilitate the hanging of the hook from the upper beams of a house. While some hooks in neighboring areas included the painted and decorated skulls of enemies instead of faces carved in wood, this finely executed, large example probably depicts a mythical founding clan member whose presence is associated with the well-being of the clan. The face at top, with the flat circular eyes that appear on other types of sculpture from the region-with its elongated nose that perhaps represents the rostrum of a sago beetle or a bird’s beak. (Smidt in Kooten and van den Heuvel, eds., Sculptuur uit Afrika en Oceanië, Otterlo, 1990) In addition to the examples illustrated by Reche, the Otago Museum, Dunedin holds a similar hook in its collection (inv. no. D34 906). Other related hooks are in the University Museum, Philadelphia (inv. no. 29.50.543; see Wardwell, The Art of the Sepik River, Chicago, 1971, pp. 62-63, fig. 118), which was collected from the Iatmul village of Sapanaault by Carl Haug, circa 1914; an example from the village of Yentschamangua in the Museum der Kulturen, Basel (inv. no. Vb 14958); and another, collected circa 1926 by George Wilfred Lambert, now in the Museum for Anthropology at the University of Queensland, Brisbane (inv. no. 23784; see Howarth, Myth and Magic, Canberra, 2015, p. 149). A more elaborate example collected by Wilhelm Häberle and donated by Augustin Krämer in 1913 to the Linden-Museum Stuttgart (inv. no. 83890) has a similar tri-part flowing design on both front and back. Like the present hook, on the reverse side the motif terminates in a “spike” form, calling to mind the hooks with pointed prongs for skulls to be placed.