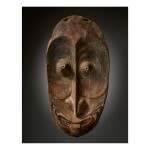 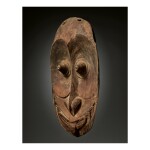 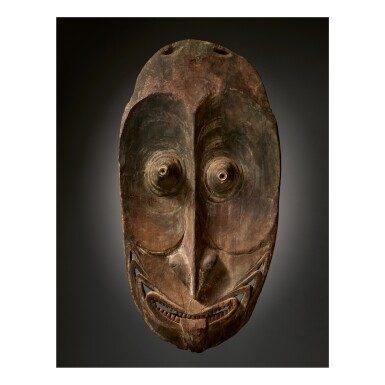 Harry A. Franklin, Beverly Hills, acquired by the late 1960s

A IATMUL GABLE MASK FROM A CEREMONIAL HOUSE

The Sepik River defines and prompts those living along its shores to adapt to its changing boundaries, ebbs and flows. While depending on its proximity and position to the water’s edge, traditional ceremonial architecture was created according to clan requirements and to adapt to the cycle of the rising river. Among the Iatmul peoples of the middle river, the facades of these complex and massive structures were adorned in many ways, both symbolic and foreboding. Typically, the immense structure had a saddleback roof with two facades and towering spires adorned with various types of sculptures representing clan creation myths and other stories. As an ominous notice to those who approached with harmful intent, enemies' decorated skulls peered out from rectangular "windows". Depending on the specific area, large masks woven in basketry or carved and painted wood that depicted human faces were placed on the facade just under the spire. Wood masks such as this example with protruding tongues and bulbous eyes that decorated the gable served both apotropaic and threatening functions to warn enemies to beware and repel evil spirits. On Iatmul family houses, "the gable masks of the dwellings embodied female, clan-specific spirit beings, who were supposed to protect the inhabitants of the house from disaster."(Kocher Schmid in Greub, Authority and Ornament: Art of the Sepik River, Papua New Guinea, Basel, 1985, p. 184). Similar examples are found in the Clausmeyer collection of the Rautenstrauch-Joest Museum, Cologne (inv. no. 48 434) and the Übersee Museum, Bremen (inv. no. D 3526). Stéphen Chauvet published two related examples from Bremen (Chauvet, Les arts indigènes en Nouvelle-Guinée, Paris, 1930, p.104, figs. 395-396).