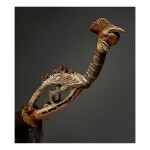 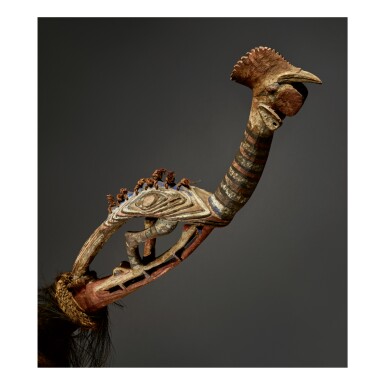 Harry A. Franklin, Beverly Hills, acquired from the above by the 1960s

At the end of the initiation process, the newly-initiated youths emerge from the enclosure where they have been confined for a period of months. Their mothers welcome them at the gateway to the enclosure as their children, now transformed by the trials they have passed through, and appearing in the full captivating splendor of their ancestral costumes. Their scarified and shining bodies are adorned with rich ornaments including a lime container under the arm of each, which are gifts from their maternal uncles.

These containers are composed of a receptacle made of bamboo, in which lime for the consumption of betel is stored; at one end is inserted a lime spatula (lost in the present example), and at the other is a cap carved with a figural finial. As they were carried, the figural end of the ensemble was pointed toward the ground.

The most common motif for the carved finial is, as seen here, a rooster - a bird admired in the Sepik for both its brilliant plumage and sexual vigor. Here, the bird balances on the head of a crocodile, an ancestral symbol par excellence. This combination likely evokes the double nature of the initiate: with his majestic regalia, he has become at once an ancestor and a new man, equipped with all the befitting seductiveness.