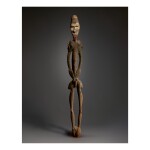 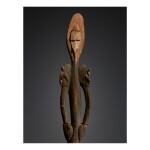 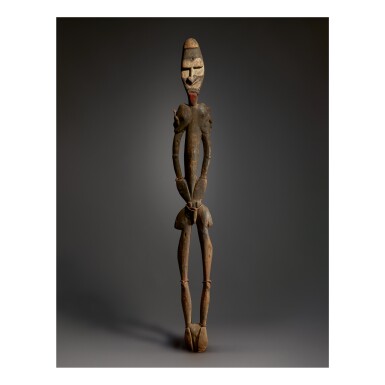 Large ancestor figures from the Middle Sepik Region of Papua New Guinea are extremely rare, and especially so those of the monumental scale of the present figure. As with other types of human images in early Papuan art, they invoke idealized ancestors in the spirit world who can be called upon for assistance in hunting and other worldly activities. This figure from the Franklin Collection is remarkable not only for its scale but for its highly attenuated sculptural style. The male body is depicted with long, languid limbs, paddle shaped hands, and armor-like faceted shoulders and hips. On the reverse of the head of the figure is the stylized face of a totemic animal, carved in flat relief, alluding to the clan and community which this figure served; likewise small birdlike figures cling to the outside edge of either shoulder. The face is depicted with a stern expression beneath a heavy brow and centered upon an elongated nose, recalling the spirit masks (mai) of the Iatmul. The ancestor’s tongue, painted a bold red, projects in a menacing gesture. The feet – paddle shaped like the hands – are pointed downward, as if the figure is leaping forth from the earth or water, giving the sculpture a powerful animated dynamism.

The extreme proportions of this elegant figure are of a profile rarely seen in world art, and the narrow and attenuated body recalls the dramatically elongated figures of the celebrated 20th century Swiss sculptor Alberto Giacometti.