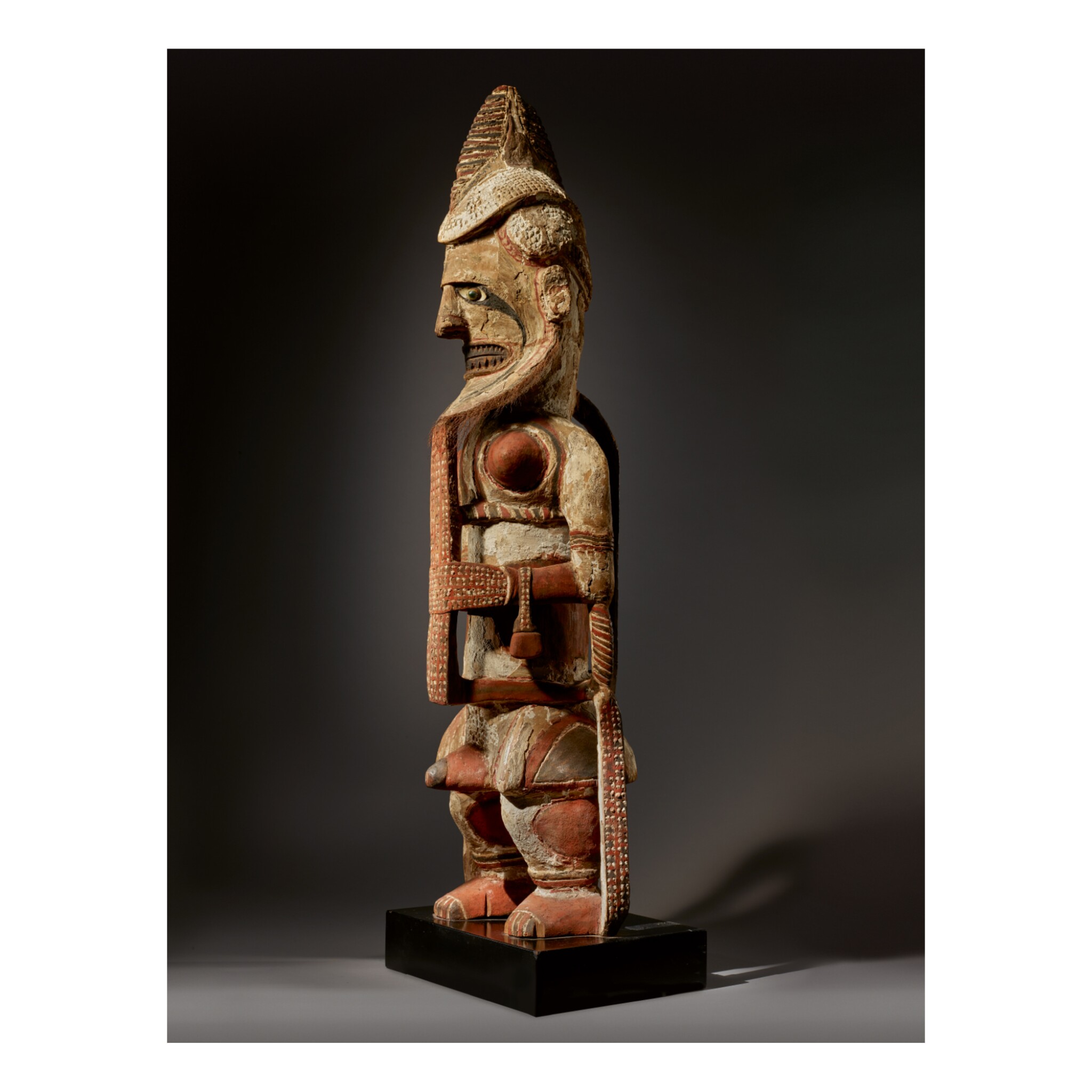 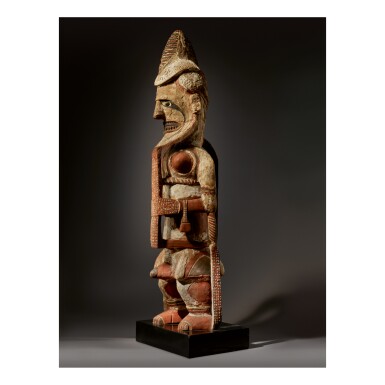 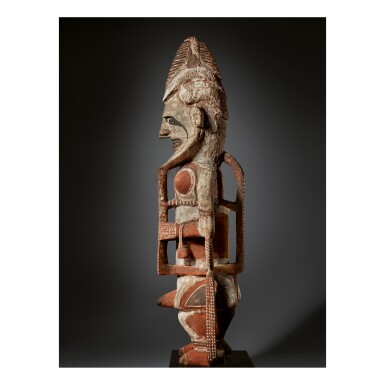 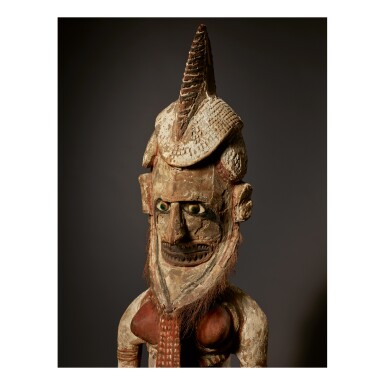 The most coveted and emblematic statues of New Ireland are the stylized human representations known as "Ulis". These wooden sculptures, colored with ochre, black, yellow and white pigments, generally measure around 130 cm (51 in) and more rarely 150 cm (59 in) or 180 cm (70 in) in height. Their broad bearded head is surmounted by a crest, their convex face is white; the orbits and outline of the face are enhanced with black pigment. Ulis are stocky and stand on short legs. Their carnivorous smiles and defiant attitudes accentuate the power of these artworks. Unlike other statues carved in New Ireland, which were generally destroyed or abandoned after the mortuary rituals, Ulis were carefully preserved in men's houses over the years, between the different ceremonies. According to Augustin Krämer, Ulis can be classified into 12 categories. Here, the hands hold a band on the stomach and a small bag hangs on the left wrist, characteristic of the "Lakiserong" type. In our database, which catalogues approximately 250 Ulis (to be published in Beaulieu, Uli, 2019), we have identified sixteen of this type, four of which are currently in private collections.

The condition of this Uli is probably very close to its condition at the time it was collected. It is still partly covered by a thick layer of chalk, and an ochre chain pattern, with traces of yellow pigments, runs along the beard on both sides. The fact that the chalk is still stuck to the wood after a hundred years suggests that it came from freshly burnt coral at the time the Uli was made, suggesting the origin is more probably coastal than inland. Old coral from inland New Ireland did not stick well to the carvings. The weathered patina on this Uli's feet suggests that it has remained standing in its presentation hut after a ritual for an extended period, as was customary. The dark patina on the back comes from exposure to the smoke in the beams of a Men's house between different ceremonies.

We have identified several Ulis that could have been carved by the same hand or the same group of carvers. They were all carved in the 19th century and share strong stylistic similarities, although they are of different types. First, two Ulis in the Ethnologisches Museum, Berlin (inv. no. VI 28578, collected by Friederici, and inv. no. VI 27741, collected by Boluminski in Konobin). There is also a Uli in the Weltmuseum, Vienna (inv. no. 147726); one in the Museum Volkenkunde, Leiden (inv. no. 2087-1,72); and one formerly in the Übersee Museum, Bremen, currently in a private collection.

Bismarck Archipelago art, and particularly New Ireland art, was central to the development of ethnology, an example of a rich and untouched culture doomed to disappear upon contact with the western world. Under the impulse of German museums and Governor Hahl, most of the residents in the colony were engaged in an unrestrained search for ethnographic artefacts. Dr Kornmajer was a district judge in Herbertshöhe (headquarters of the colonial administration, nowadays known as Kokopo) from July 11, 1903 until March 18, 1905. He travelled at least once to Neu-Mecklenburg, in February 1905 on board the government steamer Seastern when he was conducting an enquiry about the murder of Father Rascher and other members of a mission. To our knowledge, he brought three Ulis back to Germany. We do not know if he obtained the Ulis during the said voyage, or if they were obtained from his acquaintances in Herbertshöhe, such as Governor Albert Hahl or other colonial residents. The three Ulis had the same fate. First, they entered the important collection of the Badisches Landesmuseum in Karlsruhe. In the Landesmuseum's inventory they were labelled "Idols", with minimal information; they were then transferred to the Reiss-Engelhorn-Museen in Mannheim in 1935, when their information was recorded. This Uli, inv. no. III Sü 6973, was then obtained by Arthur Speyer in 1966, possibly in an exchange for North American artefacts. The other two Kornmajer Ulis are still part of the collection of the Museum Weltkulturen der Reiss-Engelhorn-Museen in Mannheim (inv. nos. III Sü 4562 and III Sü 4560).