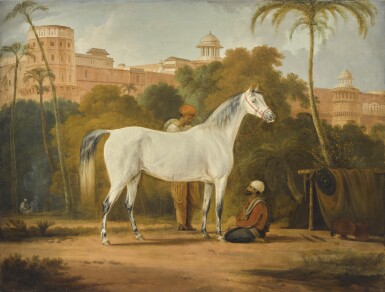 To request a condition report for this lot, please email oldmasterconditionreports@sothebys.com.

By descent to his daughter, Annabella, Lady Byron, wife of the poet George Byron, 6th Baron Byron (according to an inscription on the back of the stretcher this picture is recorded in an inventory of Lady Byron's plate and pictures of 1826, together with a companion picture of another Arab mare);

By descent to their daughter, Judith Blunt-Lytton, suo jure 16th Baroness Wentworth (1873–1957), Crabbet Park, (according to the inscription on the back of the stretcher);

With The Leger Galleries, London, by September 1962 (as English School);

From whom acquired as a gift for the present owner.

An extensive pencil inscription on the reverse of the stretcher erroneously dates this picture to 1684 and identifies the horse as an Arabian mare from the Royal Stud at Hampton Court, belonging to King Charles II. Whilst the stud at Hampton Court, founded in the sixteenth century, was indeed home to a number of Arabian horses, particularly during the reigns of King William III, Queen Anne and King George I, this picture dates to the early 19th century and is almost certainly the work of George Henry Laporte (1799–1873) animal painter to HRH Prince Ernst Augustus, Duke of Cumberland and King of Hanover (1771–1851). Laporte exhibited a number of paintings of Arabian horses and oriental subjects at the both the British Institution and the Royal Academy between the 1820s and 1850s; including Study of one of the Arabs presented to Her Majesty from Sir Jamsetjee Jejeebhoy (1846); and Portrait of Feridjan, an Arab of high caste, the property of Chevalier Machado (1850). The architecture of the fort depicted in the background is very close to that at Delhi, and possibly depicts the Red Fort – the main residence of the Emperors of the Mughal dynasty.

The painting has a distinguished provenance, having descended from the Milbanke family at Halnaby Hall in Yorkshire, through the great romantic poet Lord Byron and his wife Annabella, suo jure Baroness Wentworth, to another Lady Wentworth, Judith Blunt-Lytton. The proprietress of the famous Crabbet Park Stud, Lady Wentworth and her parents before her, were instrumental in preserving the bloodline of the Arabian horse in the late nineteenth and early twentieth centuries and over 90% of all Arabian horses alive today can trace their pedigrees back to Crabbet Park.