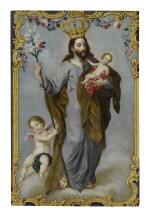 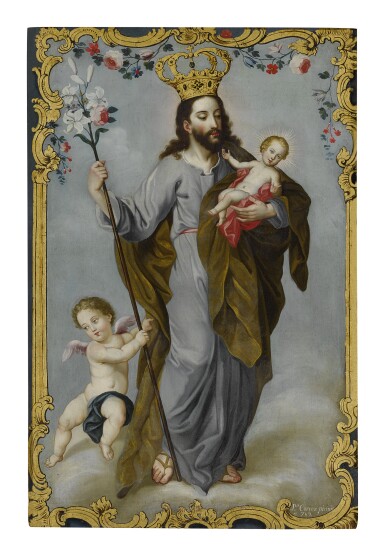 The canvas appears to be unlined, though the edges have been strip-lined. The decorative image has been well preserved, with its details and bright colors kept. Inspection under UV reveals some strengthening at far right, next to the left elbow of the central figure, as well as a long line of retouching at bottom center. Barely any, but a few other tiny pindots of retocuhes are here and there. Offered in an elegant giltwood frame with a detachable ornament at top center.

José Cortez de Alcocer managed an active workshop in Quito during the 18th century. He was favored by the elite of the ruling government, becoming one of the lead painters in Ecuador. This lot shows his mastery of vibrant colors that were in taste at the time, while the gold embroidery adds a level of divinity that can often be seen in his devotional works. The inclusion of flowers as garlands, likely inspired by the Old Masters such as Jan Brueghel and Sir Peter Paul Rubens, reappears in other

works like in Our Lady of the Reedbed of Irún with Donor, Captain Joaquín Elorrieta formerly in the collection of Roberta and Richard Huber, New York, but now in the Philadelphia Museum of Art, Philadelphia (inv. no. 2012-139-4). His paintings have been exhibited in other prominent museums like Museo de América, Madrid and Art Museum of the Americas, Washington, D.C.