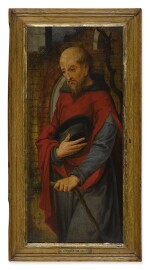 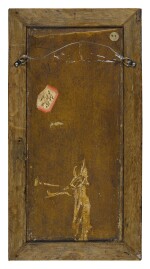 MASTER OF THE ADULTEROUS WOMAN OF GHENT | SAINT JOSEPH

MASTER OF THE ADULTEROUS WOMAN OF GHENT | SAINT JOSEPH

MASTER OF THE ADULTEROUS WOMAN OF GHENT

active in Antwerp circa 1530

oil on panel, a fragment

The panel consists of a single uncradled board that is stable with the top edge beveled. Underneath an old varnish, the figure reads well. There is some thinning to the paint surface. Two thin scratches that form a cross shape can be seen: one, which appears to be a crack, runs vertically from the hand of the figure holding the had to the bottom edge, meanwhile the other scratch runs horizontally from the extreme edges through the cane. Frame abrasions are along the edges. Some pindot dents are scattered here and there, like on the red robe of the sitter. Inspection under UV is difficult to read due to the varnish, though there appears to be some retouching to the blue robe and top left quadrant. Offered in a wooden frame with a gold inner-liner.

The eponymous painting by the so-called Master of the Adulterous Woman of Ghent, an artist from the circle of Pieter Coecke van Aelst, is the Christ and the adulterous woman in the Museum voor Schone Kunsten, Ghent.(1) In the present painting, the artist represents Saint Joseph in a nearly identical manner to the same figure in his Nativity, formerly in the Robert Finck collection, Brussels.(2) These two corresponding figures look downwards with a bald, circular head, curved nose, and pointy beard. Their faces connect stylistically to that of the figure conversing at far right in the eponymous painting in Ghent.

We are grateful to Peter van den Brink for suggesting the attribution on the basis of photographs.