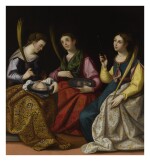 This work is restored. Under ultraviolet light, one can see retouches in the figures addressing some thinness and cracking, including in their clothing and objects. The background and some other areas may have received an overzealous approach to retouching, reducing cracking which is not unexpected for works of this period. Regardless, the retouches are well applied, and the work certainly looks well. There is a vertical join in the canvas running immediately to the right of the head of the figure on the left. There is a small restoration in the background in the upper right, and in the center of the right side. Cleaning is not recommended, and the work can be hung as is.

Francisco de Zurbarán created several images of virgin martyrs, such as Saint Apollonia in the Musée du Louvre, Paris (inv. no. M.I. 724), Saint Lucy in the National Gallery of Art, D.C. (inv. no. 1943.7.11), and Saint Agatha in the Musée Fabre, Montpellier (inv. no. 852.1.3). These appear to have inspired the artist of the present lot who also portrays each saint as a beautifully dressed woman, styling the jewels and garments in vogue in Seville during the 17th Century. Just like Zurbarán’s portraits of saints did, this painting alludes to the sufferings each saint endured during Christian persecutions through the emblems they hold.

Saint Agatha, known as the patron saint of cancer, is shown with a shiny plate with cut breasts. During the persecution of Decius, she was tortured and supposedly had her breasts cut off.

Saint Lucy supposedly had her eyes removed during the Diocletianic Persecution of Christians and is represented holding a dish with two cut eyes. According to the story her eyes were miraculously restored during her burial, thus making her the patron saint of the blind, or the protector of sight.

Saint Apollonia, who holds a pair of pincers with a tooth, is regarded as the patron of dentistry since it has been said that her teeth were violently pulled out during the uprising against Christians in Alexandria, prior to the persecution of Decius.