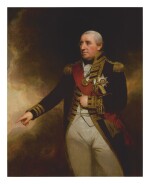 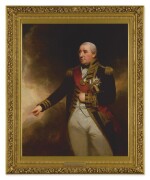 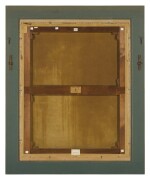 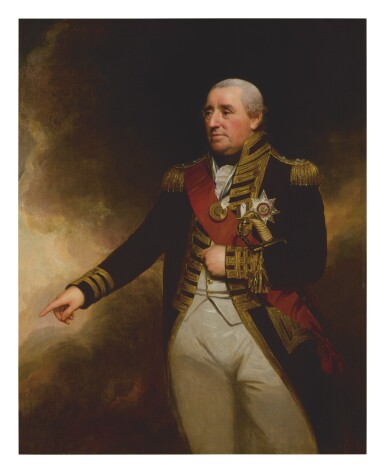 Canvas is lined. Painting is in overall good condition given its size. Some of the original impasto is beautifully preserved, especially in the gold details, though the paint surface has thinned in some parts, like in the white pants with scattered retouches. Under UV light, a spot of repair that has been strengthened fluoresces in the center of the sitter's proper right arm, in the bottom of his chin, and possibly in the cloud at center left. Very few scattered spots of retouching fluoresce close to the edges. Painting can hang in its current state. Offered framed.

By descent from the sitter to his daughter, Lady Duckworth-King;

From whom acquired by A.C. Duckworth, Orchardleigh Park, Somerset;

With Oscar and Peter Johnson, London;

Exeter, Royal Albert Memorial Museum, An Exhibition of Portraits of Departed Worthies, on loan, July-August 1873, no. 12;

Catalogue of an Exhibition of Portraits of Departed Worthies, exhibition catalogue, Exeter 1873, cat. no. 12, pp. 7-8;

According to the artist’s account books, the sitter paid Beechey 84 Guineas for this portrait in 7 June 1810 [1]. The numerous versions [2] and engravings [3] that exist of this painting are a testament to the extensive naval career of Sir Duckworth.

At the suggestion of Admiral Edward Boscawen, Duckworth abandoned his studies in Eton at the age of 11 to join the Royal Navy. By early 1776, Duckworth was named First-Lieutenant of the HMS Diamond, which set sail for North America where he was involved in a controversy where five soldiers were accidentally killed in Rhode Island.

On the outbreak of the war with France, Duckworth served under Admiral Lord Howe in the Channel Fleet and was one of the eighteen commanders honored with the Naval Gold Medal. Other distinctions he received for his prowess during the French Revolutionary War were a promotion to Rear-Admiral and nomination for Knight Companion in the Most Honorable Military Order of the Bath.

Duckworth was sent to Jamaica in 1803 as Commander-in-Chief and led the operation that resulted in the surrender of General Rochambeau and the French army in Saint-Domingue during the Napoleonic Wars. In 1806 he was instrumental in the Battle of San Domingo, after which he was presented with the sword of honor by the House of Assembly of Jamaica.

Upon his return to England in 1812, Duckworth accepted a parliamentary seat for New Romney and was created a Baronet in 1813.

3. This portrait has been engraved by Giovanni Vendramini, George Clint, and Charles Turner.