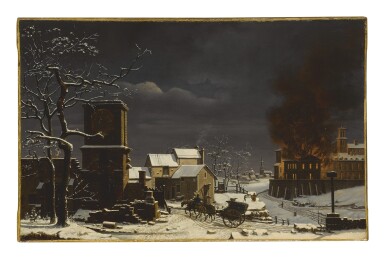 ETIENNE BOUHOT | A FIRE IN A WINTER LANDSCAPE

ETIENNE BOUHOT | A FIRE IN A WINTER LANDSCAPE

A FIRE IN A WINTER LANDSCAPE

The canvas is lined. Overall the image reads well. The lighter tones in the paint surface remain bright and crisp, though there is some thinning to the paint on the darker hues. Craquelure is barely visible and not distracting. Inspection under UV is difficult to read due to an uneven varnish, but scattered thin lines of retouching fluoresce in some of the browns. Painting can hang as is. Offered framed.

Where acquired by M. Robert-Voisin;

There acquired by The First National Bank of Chicago;

From whom acquired by the present owner in 2004.

Etienne Bouhot made a reputation for himself through the panoramic perspective he developed in his landscapes, a technique he likely mastered in the workshop of Pierre Prévost. Given that his talents were as a landscape artist, Bouhot would often have other artists like Xavier Leprince and Léopold Boilly paint the figures in his compositions. His works, which frequently exhibited in the Paris Salon, were highly sought after by the elite in Paris, including the Duke of Orleans, the Duke and the Duchess of Berry, and Louis XVIII. Bouhot became the Director of the Drawing Academy in Semur where he died in 1862.