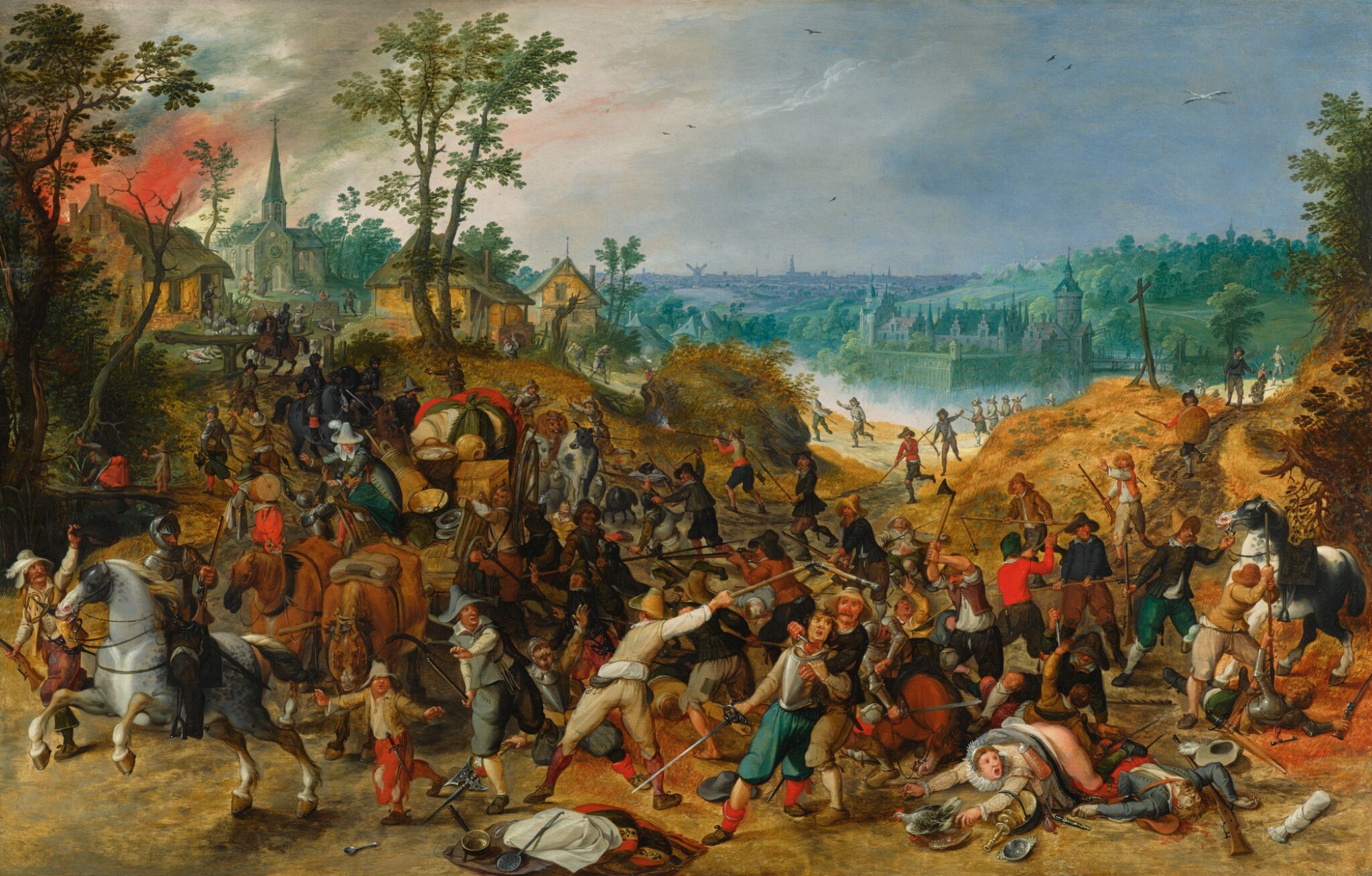 An extensive landscape with marauders hijacking wagon, a moated castle and the city of Antwerp beyond

The large panel adhered to the reverse but appears flat and stable. The panel is constructed out of two horizontal planks, a panel join runs horizontally through the centre of the painting visible in raking light. The paint surface is secure and stable with a clear and even varnish, the pigments are remarkably vivid and well preserved and much of the fluid brushwork still visible. There are no major or restorations visible to the naked eye. Where, with time, some of the pigments have thinned we are able to see throughout much of the painting Vrancx's dynamic under drawing.

Inspection under ultra-violet light reveals some retouchings along the aforementioned panel join and a few other retouches to minor surface scratches mostly in the sky. In addition there are a few minor restored horizontal cracks at the left margin, one running approximately four inches from the left margin in the tress in the upper left, another one inch in length three quarters of the way up from the left margin of the panel and another the same length at the lower left corner. In remarkable overall condition with no further work required.

Offered in a carved wooden frame with ripple mouldings in good condition.

There acquired by the father of the present owner;

Vrancx lived in turbulent times and he would have clearly remembered the wartime devastation and horrors during his childhood in Antwerp. Throughout his successful career, Vrancx transformed the large-scale battle scenes of the sixteenth century into smaller scale cavalry scenes and skirmishes, in which the reality of warfare for many of his countrymen and day to day life during the Eighty Years War overshadowed any recognition for the heroics of chivalry. In so doing, Vrancx created a standard type for the genre that would be employed by his contemporaries and followers for generations.

This painting does not depict an historical event. In it we see Vrancx’s predilection for the ‘skirmish’ subject matter, which gave him the perfect platform for the theatrical, dramatic tendency that dominates his art throughout his career. The horse-driven cart, laden with household goods, surely cannot be the cause of the extensive and bloody skirmish all around it and instead must simply have found itself unintentionally caught up in it. It is thus purely a centrepoint around which Vrancx’s depiction plays out: the bloody ransacking of a small village. Beyond it, as a counterpoint, is a peaceful and rather beautiful moated castle, and beyond that still, the city of Antwerp, the cathedral spire clearly visible against the skyline. The scene may be inspired by such events as the sacking of Wommelgem by troops of the Dutch Republic on 26 May 1589 after the villagers refused to pay tribute. Vrancx executed several versions of that subject: a painting sold New York, Sotheby’s, 22 May 2019, lot 33; another of circa 1615–20 in the Kunstmuseum in Düsseldorf;1 another dated 1629, sold at auction in December 1999, for $565,946;2 and one of circa 1630–40 in a private Belgian collection;3 and there is also a drawing at the Hermitage Museum, Saint Petersburg.4﻿