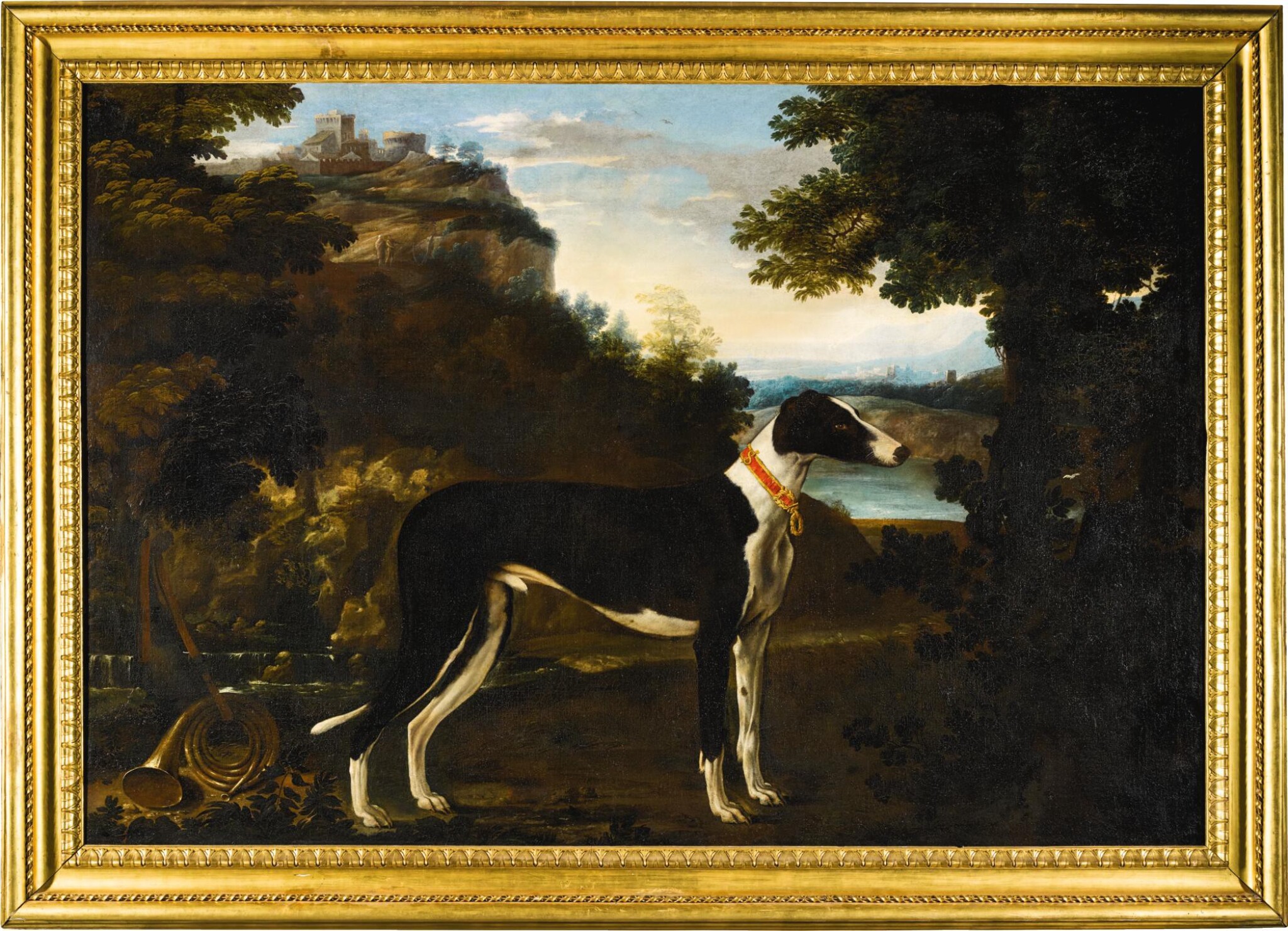 Portrait of a black and white greyhound belonging to the Chigi family, standing in a mountainous landscape

Portrait of a black and white greyhound

The large canvas has been lined onto a fixed wooden stretcher with cross batons in the corners and would appear to be structurally sound and the overall pattern of drying craquelure is secure.

The painting would therefore appear to be in stable condition and the only work that might be required is revarnishing to ensure an even surface coating. The extent of retouchings applied in the past should be noted.

Acquired by the present collector in 1998.

These grand and elegant portraits of greyhounds (presented here and in the following lot), set in wooded, mountainous landscapes, date to the mid-1660s and once formed part of a group of works commissioned by a member of the Chigi family for their residences in and around Rome. They are by Michelangelo Pace, called Michelangelo di Campidoglio, an artist who until 1939 – when the Chigi archives recording Campidoglio’s employment with Cardinal Flavio Chigi were published – was known purely as a still-life painter. Together with the other known paintings of dogs from the series, these extraordinary canvases, which count among the largest pictures of their kind, are some of the earliest examples of sporting art and represent a significant chapter in the history of canine portraiture.

Cardinal Flavio Chigi (1631–93) commissioned canvases from Campidoglio in November 1664, possibly to celebrate the visit of his uncle, Pope Alexander VII, to the Palazzo Chigi in Ariccia, near Rome. Chigi was one of the most important collectors and patrons of his time. Born in Siena, he moved to Rome in 1656 as Secretary of State to his uncle, the Pope. He filled his palazzo in Piazza Santi Apostoli in Rome (now Palazzo Odescalchi) and his various country villas with Old Masters, contemporary paintings and sculpture, and antiquities.1

Four paintings from the Cardinal's series, executed in 1665, remain in situ in the ground floor apartment of the villa, known as the ‘Sala dei cani’ (fig. 1).2 Each large canvas depicts a hound either in the act of coursing or sitting for its portrait, before vistas of the Chigi estates. In addition to these works, the Cardinal’s accounts of June 1665 and January 1666 record payments made to Campidoglio for no fewer than twelve further depictions of dogs, of four spans in size, for the Villa Versaglia in Formello – his country seat inspired by Versailles, the decoration of which centred around its owner’s passion for the hunt.3

Several paintings have been associated with this commission: a Greyhound and Thorn Bush was exhibited at the Datrino Gallery in Rome in 2004, and other canine portraits from the Chigi collection have appeared at Sotheby’s, New York, 28 January 1999, lot 297; Christie’s, London, 6 July 2010, lot 9; and the Dorotheum, Vienna, 17 October 2012, lot 531. Luigi Salerno also published A dog in a landscape with dead game (without dimensions) from a private collection.4 The dimensions and designs of the present canvases indicate that they too belonged to one of these decorative schemes.

The present lot depicts the hound in the early evening, the light of the setting sun illuminating the dog's front quarters, particularly his fine neck, legs and paws. The connection with the hunt is made explicit by the presence of the horn, lower left. The landscape pictured in the following lot is bathed in a cooler light, befitting the silvery coat of the greyhound, probably denoting a slightly earlier time of day. Interestingly, it is possible to make out pentimenti in that dog's hind legs, where Campidoglio has chosen to adjust slightly the position of the paws.

Both dogs wear collars bearing elaborate gilded clasps, which correspond to that worn by the hound in the aforementioned painting offered at Sotheby’s, New York in 1999. These collars are also decorated with a distinctive arrow running through a letter ‘S’, which Francesco Petrucci (see Literature) has suggested may relate to Flavio Chigi’s cousin, Cardinal Sigismondo Chigi (1649–78), whose enthusiasm for hunting is similarly recorded in the family archives.5 Though neither landscape is precisely identifiable, they may represent references to Porto Ercole and the Castel Gandolfo at Lake Albano, both connected with the Chigi family.

It seems likely that Campidoglio was aware of Guercino’s celebrated portrait of Count Filippo Aldrovandi’s Dog in a landscape, of circa 1625, today at the Norton Simon Museum of Art, Pasadena (fig. 2), one of the most characterful portraits of a beloved canine companion. Although dogs have been perennially favoured subjects, particularly in court portraits, it was not until around the mid-sixteenth century that works such as Jacopo Bassano’s Two Hunting Dogs tied to a tree (Musée du Louvre, Paris) treated portraits of the animals as an independent genre.6 The present paintings and the rest of Campidoglio's series represent relatively few seventeenth-century examples of the tradition, which was also explored to some extent by Justus Sustermans in Florence and Frans Snyders in the north. The genre would become truly established in the early eighteenth century with commissions from King Louis XIV of France for portraits of his favourite hounds from Jean-Baptiste Oudry, and was developed perhaps to its greatest extent in English sporting art, and the following century in the work of Sir Edwin Landseer.

1 Many of these were acquired in the first half of the eighteenth century for the collections in Dresden of Augustus the Strong, Elector of Saxony and King of Poland.

5 Cardinal Sigismondo Chigi died aged just 29, and his own art collection was later merged with that of his cousin, Agostino Chigi.