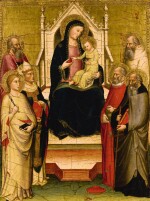 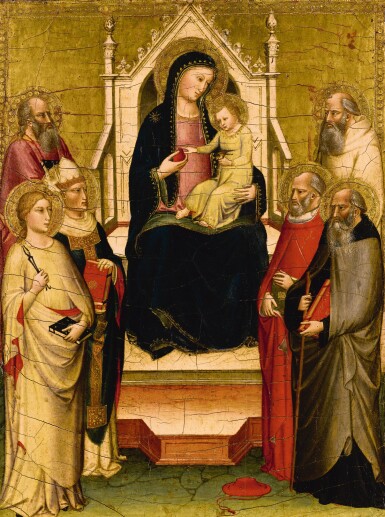 The panel and paint surface seem to be in overall good condition. The poplar panel is uncradled and only very slightly bowed, the reverse is covered in a red/ brown pigment. Visible from the reverse is a crack running the length of the panel, it is visible, although not distracting, from the front also; running from the top margin down through the Christ child's shoulder, the hand of Madonna through the Cardinal's hat to the lower margin. The paint surface has developed a distinctive craquelure (visible in the catalogue image). The cracks appear to have been filled with a dark pigment so as to minimalize their effect. Overall the paint surface seems to be in remarkably good condition with much of the minute original brushwork still clearly legible. Additionally the gold background appears to be well preserved with only a few glimpses of the red ground underneath, and the punchwork remains crisp. There is a old damage at the centre of the lower margin. The blue of the Madonna's robe has marginally discoloured, but otherwise the pigments appear very well preserved and the colours vibrant.

Inspection under ultra-violet light reveals a thick and old varnish that fluoresces opaque. There are however a few retouchings visible namely to the lower section of the Madonna's robes above her right eye and in her cheek and chin. Other minute older retouchings are visible scattered throughout and in the yellow of Saint Apollonia's dress.

Offered in a modern giltwood frame in a good condition.

With Bacri Frères, Paris (according to a label on the reverse);

Acquired from the above by the present owner.

Miklós Boskovits affirmed the attribution following Bernard Berenson’s tentative identification of this attractive devotional panel as the work of Mariotto di Nardo, a leading Gothic painter active in Florence during the final decades of the fourteenth century and the first quarter of the fifteenth century.1

Mariotto’s work was in high demand; he was employed on public and private commissions at Florence Cathedral and at some of the city’s most prestigious churches, foremost among them Santa Maria Maggiore and Orsanmichele. This small altarpiece represents a holy conversation with six saints surrounding the throne on which the Madonna is seated with her son, the Christ Child. Apollonia, holding pincers and a tooth alluding to her martyrdom, stands opposite Anthony Abbot; behind them are two of the four Latin Fathers of the Church: on the left, Gregory the Great, with his attribute of a dove (symbol of the Holy Spirit), hovering by his ear to signify divine inspiration, and on the right, Jerome dressed in sumptuous red cardinal robes; behind them, the bearded saint with a book is probably Paul, one of Christ's apostles and author of the Epistles, and the other, wearing white monastic robes, is Benedict, founder of the order. Boskovits assigned the work a date of 1385–90, and thus placed it early in Mariotto’s career, conferring a similar date to his comparable Coronation altarpiece at the Fitzwilliam Museum, Cambridge.2

1 An undated label on the reverse of the panel states: 'Authenticated by/ B. Berenson Esq[?]/ as by/ Mariotto di Nardo'.