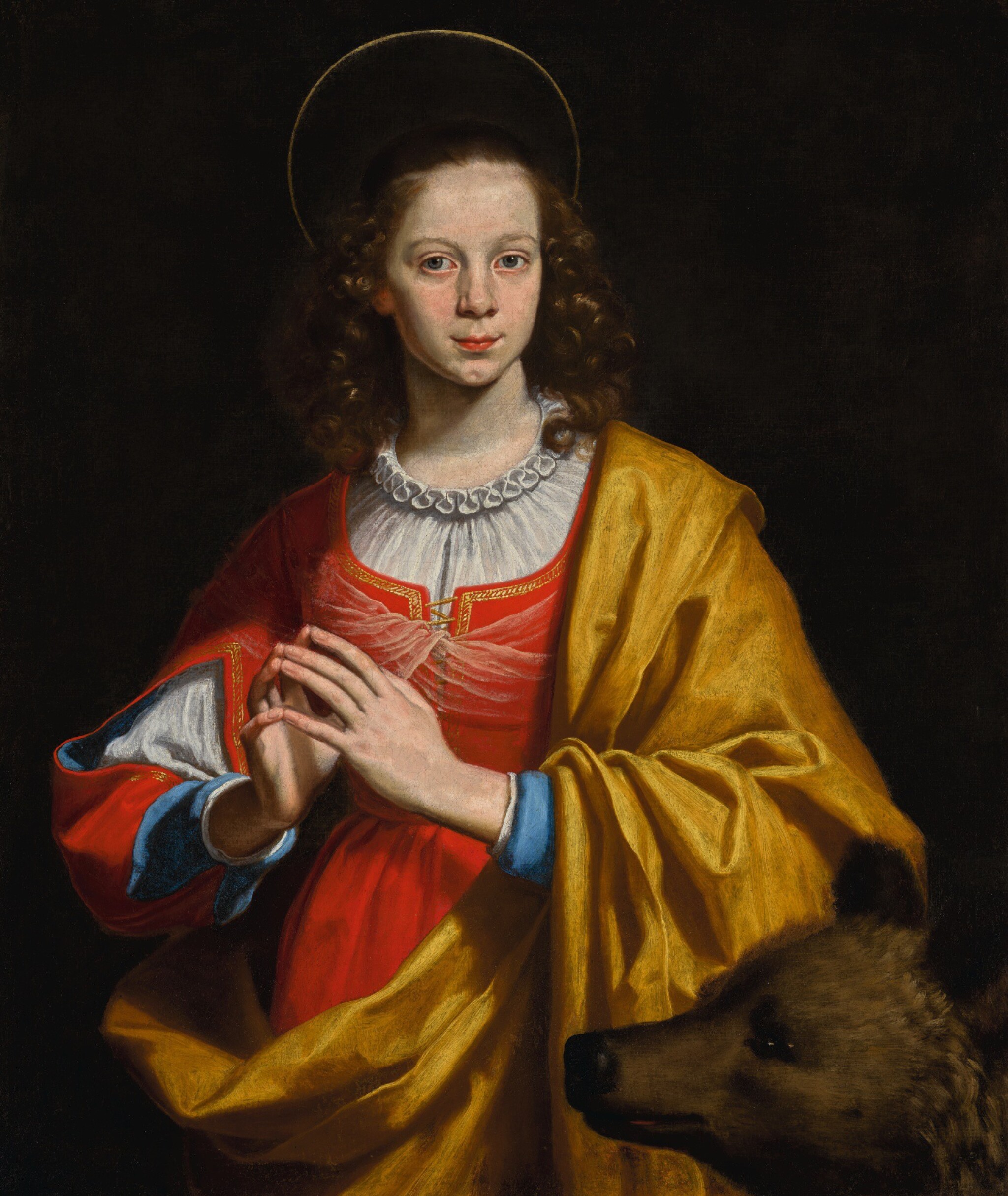 Portrait of a young woman, probably Margherita Galli, in the guise of Saint Margaret

The canvas is sensitively lined. The paint surface is secure and stable with no major damage visible to the naked eye. The varnish appears clear and even. There is a slight degree of thinning of the paint in the pale tones of the young woman's flesh where the ground shows through slightly, and in the gauze-like veil across her chest. Otherwise the bold colours remain vibrant. Inspection under ultra violet light reveals some well executed retouchings scattered in the face, the touches in the forehead and collar bone are the most notable, others seemingly just to mast the pattern of craquelure. There are further retoucings in her hands: a concentrated area of restoration in the back of her left hand and wrist measuring approx. 3 inches in length; and further strengthenings in the shadows of the palm of her right hand and wrist. There are other small scattered retouchings in the robes and a larger amount thoughout the dark background.

Offered in a carved and gesso gilt and black wood frame in good condition.

For much of his early career Lorenzo Lippi was apprenticed in the workshop of Matteo Rosselli, along with other painters such as Baldassare Franceschini, called il Volterrano, and Jacopo Vignali. Lippi did not open his own independent practice until 1634 and continued working in association with Rosselli until at least 1640. He was considered one of the principal painters in mid-seventeenth century Florence and was greatly esteemed by contemporaries, in particular his friend and biographer Filippo Baldinucci (1681–1728).

The beautiful sitter is possibly identifiable with one of the daughters of Agnolo Galli, who were depicted in Lippi's Triumph of David, dating from 1656, published by Chiara D'Afflitto as in a private collection, Florence.1 In the Florentine painting the sitter can be seen wearing the same clothes that she wears in the present work, playing the flute in the second row of maidens. This portrait, so characteristic of Lippi's ability to capture both physiognomy and psychological insight, formed part of a series of five or six pictures commissioned by Agnolo Galli in about 1656, depicting his daughters in the guise of saints and may be compared to the Saint Elisabeth of Hungary (of the same dimensions), which was listed by D'Afflitto as formerly with Giancarlo Baroni, Paris.2 While the animal depicted has been identified as a bear (and thus would make the sitter more likely to be shown in the guise of Saint Ursula), D'Afflitto described it as a dog, which is the traditional attribute of Saint Margaret of Cortona.3

The painting is accompanied by Chiara D'Afflitto's written expertise (available on request). She dates the picture to the second half of the 1650s.

3 Not to be confused with the more famous Saint Margaret of Antioch, whose traditional attribute is a dragon.