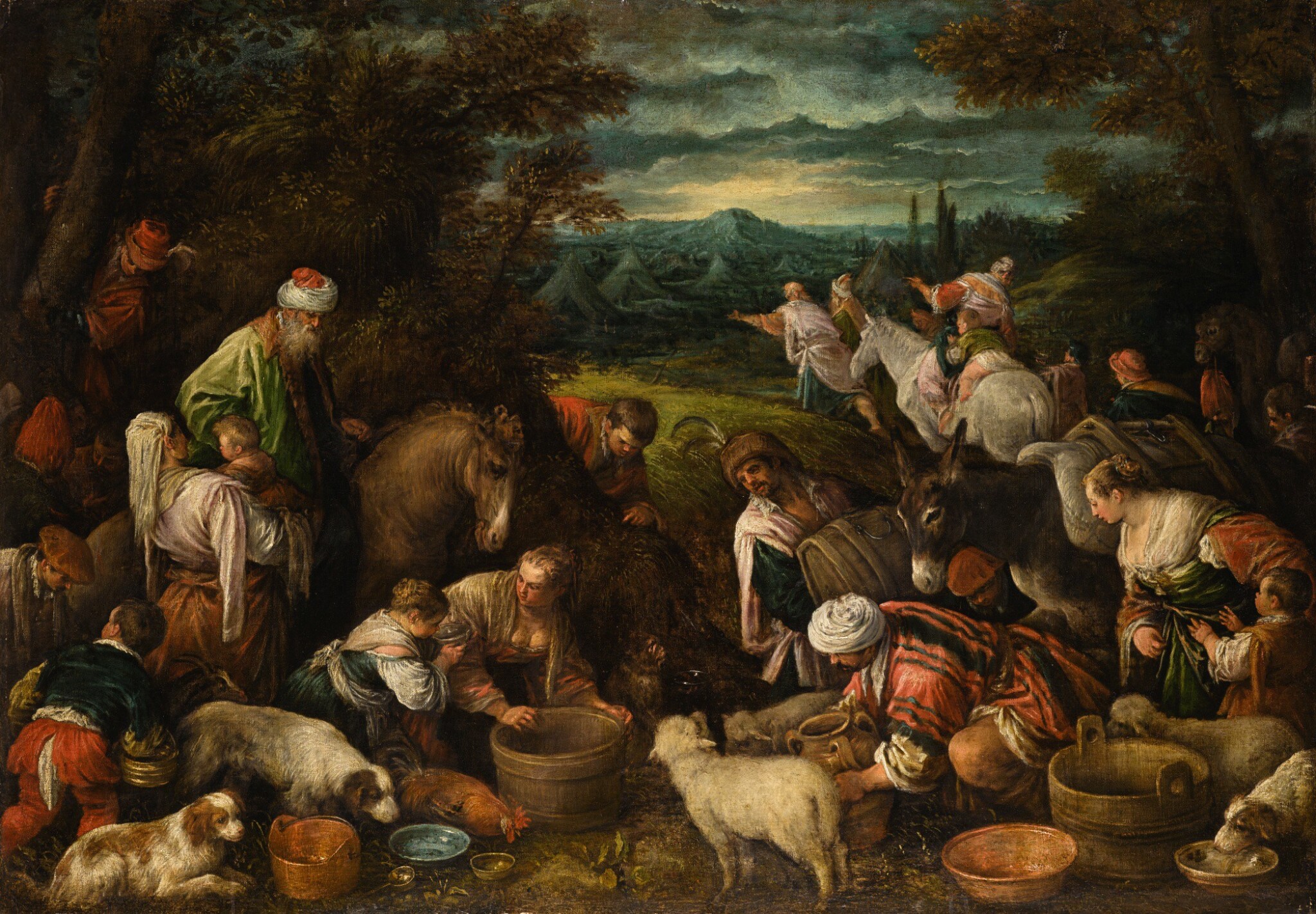 The Israelites in the Wilderness

The Israelites in the Wilderness

The coarse textured original canvas is lined. The lining is aged and, although the paint surface is stable and secure, the tacking edge has degraded and there is a loss of tension. There is a small patch to the reverse reinforcing a small damage to the tent by the mounted figure and child, upper right.

The paint layer is in good preserved condition.

There is a repaired damage, approximately 30cm long and 1cm wide, , running diagonally from between the donkey's ears to the left of the white turbaned figure.

There is a small visible repaired loss above the horse's head, left. All the edges have some restoration and a 3cm strip along the bottom edge has been strengthened.

Under u-v light all the repairs mentioned are visible along with a minor scattering of restorations across the surface.

The restorations are recent and are laid on top of an earlier varnish, now discoloured. It's removal would improve the overall tonality and reveal a freshness of the palette with colours that are strong and saturate satisfactorily.

The paint texture is very well preserved, particularly the spontaneous and bravura brushstrokes and more especially the highlights to the drapery of the figures.

Some of the more vulnerable areas within the shadows of the foliage have been slightly abraded and canvas texture has been revealed here.

His son-in-law Jacques Goyon de Matignon, 4th Duc de Valentinois, and later Prince Jacques I of Monaco (1689–1651), Palais Princier, Monaco, until his abdication and departure on the 20 May 1732, and thereafter sent at his command from Monaco to his Paris residence on the 23 October 1732;

Acquired by the father of the present owner by 1967;

Jacopo Bassano was one of the most important and original painters working in Venice in the sixteenth century, and at its best, his work places him alongside his great contemporaries such as Titian, Veronese and Tintoretto. This canvas is a mature work, painted in the mid-1570s, and a fine example of the innovative depictions of Old Testament journeys that did so much to establish his wider reputation.

The subject is taken from the Book of Exodus, chapter 17. Moses and Aaron are shown leading the Israelites out of captivity in Egypt to the Promised Land of Canaan. The foreground of the painting is filled with a colourful crowd of Israelites, young and old alike, together with their livestock and all manner of vessels, in which they carry precious water for their journey. To the right a woman on horseback points to the figures of Moses and Aaron, who can be seen at the head of the procession of the faithful, but who are largely ignored by the people, who are too distracted by their everyday cares and needs to heed the signs of their salvation. Bassano had begun to paint such subjects from the mid-1560s onwards, and in them he treated a chosen series of Biblical themes, chiefly drawn from the Old Testament, in the manner of rustic genre scenes.1

Whether Jacopo used these subjects simply as pretexts for this new pastoral genre is not known, but they may well have been intended as wider allegories of the spiritual journey to Redemption. Certainly these landscapes were particularly admired by his contemporaries; in his very brief appreciation of Jacopo Bassano, Giorgio Vasari mentions his depiction of ‘animals of all sorts’.2 Jacopo’s finest work in this vein was achieved, as is evident here, by close observation and careful study, and this new combination of rustic naturalism with a daring freshness of invention and colour made works such as this among his most popular and memorable creations.

Only brought to critical attention for the first time when it was exhibited in the late 1970s, this is one of two principal known versions of this composition. The other is today in the Gemäldegalerie in Dresden (fig. 1), where it forms a pair with a companion canvas of The Journey of Tobias. Both paintings originally came from the collections of the Grimani family in Casa de’ Servi in Venice.3 Compositionally all three paintings are very similar and reflect a general design that Bassano seems to have adopted from his earliest works in this Biblical-pastoral vein in the 1560s, such as the celebrated Journey of Jacob in the Royal Collection at Windsor Castle of around 1561. The foreground teems with activity, where many figures are clearly genuine country tipi and both they and their animals, notably the horse and the dogs, are portrayed with real interest. Behind them further figures form a curving diagonal, led by the figures of Moses and Aaron towards the blue northern Italian hills indicative of the Promised Land. The brilliant (and rather unexpected) colour scheme resonates with blues, reds, pinks and greens in a lively palette that recalls the important influence of the Central Italian maniera on Bassano’s earlier work. The brushwork here, however, is more rapid and broken, built out of rapid and small strokes of the brush, reflecting a more fluid and impressionistic style that Bassano had clearly absorbed from the late work of his great contemporary in Venice, Titian, and which increasingly informed his own later production.

Mauro Natale, at the time of the Zurich exhibition in 1978, suggested a dating for the present canvas to around 1570, comparing it to the Baptism of Saint Lucilla in the Museo Civico in Bassano or the securely dated The Martyrdom of Saint Lawrence of 1571 in the cathedral at Belluno.4 Rodolpho Pallucchini, writing in 1985, agreed with this dating, but suggested that the figures and foliage might be the work of Jacopo’s son Francesco Bassano.5 More recently, however, Prof. Alessandro Ballarin, who has inspected this canvas in the original, has kindly suggested a slightly later dating to around 1576, at the same time, for example, as Jacopo’s second series of The Four Seasons today at the Galleria Borghese in Rome.6 He believes this to be an entirely autograph work by Jacopo, and suggests that the subject may depict a moment shortly after the miracle of Moses striking the rock to produce water in the wilderness for the Israelites, as recounted in Exodus 17: 1–7. An example of this subject, similar in composition to the present work but in reverse, and in which the Israelites are depicted filling their pots with water from the rock, is at the Museo del Prado in Madrid.7 The design is also known in at least two versions: a copy or workshop repetition formerly in the Bossi collection in Munich;8 and another by the Bassano family workshop today also in the Gemäldegalerie in Dresden.9 The figure of the pointing woman astride a horse recurs again but in greater prominence in another painting of around 1576, signed by both Jacopo and Francesco, the Departure of Abraham for Canaan in Berlin, Staatliche Museen Preussischer Kulturbesitz, Gemäldegalerie.10 A related drawing of this figure, formerly ascribed to Jacopo himself but now thought to be the work of his son Francesco, is today preserved in the E.B. Crocket Art Gallery, Sacramento, California.11

Jacques, Duc de Valentinois, the future Prince Jacques I of Monaco is recorded as having owned two versions of this composition. The other version is recorded in the catalogue of his paintings in his Paris residence the Hôtel du Matignon drawn up in 1730 as a 'Un tableau copie de Bassan representant Marche des Israelites dans le désert, haut de 3 pieds 6 pouces, sur 4 pieds 6 pouces de large sur toile'', apparently a slightly smaller copy after Bassano.12 This may be the 'Journey of the Israelites' sold London, Christie's, 17 April 1997, lot 32 as 'Follower of Francesco da Ponte', with a provenance from the collections of the Duc de Valentinois. The original Bassano, of slightly larger dimensions (5 pieds width as opposed to 4 pieds et 6 pouces) indicated in the 1717 inventory of the Palais du Monaco as the original, was among the paintings sent by the Duke (then Prince of Monaco) to his Paris residence in 1732. Its whereabouts thereafter are not recorded. The painting was not included among the sixty-three paintings from the Princely Collections in Monaco sol at auction in Paris on the 4th July 1803.

We are indebted to Thomas Fuilleron, Directeur des Archives et de la Bibliothèque du Palais princier de Monaco, for his assistance with the cataloguing of this painting.

1 These subjects were sometimes painted in pairs, and included, for example, the Journey of Jacob and the Meeting of Jacob and Rachel at the Well, the Departure and Return of Abraham to and from Canaan, the Entry of the Animals into the Ark and the Journey of Tobias. The similarity of composition and subject has led to much confusion among the versions, and supports the assertion made by Ridolfi that Jacopo painted them for his own pleasure.

5 Opinion based on photographs. Letter dated 10 December 1985, a copy of which accompanies this lot.

10 Exhibited Museo Civico, Bassano del Grappa, and Kimbell Art Museum, Fort Worth, Texas, Jacopo Bassano, 1992–93, no. 60. This is the only known jointly signed work by the two artists. A replica is in the Rijksmuseum in Amsterdam.