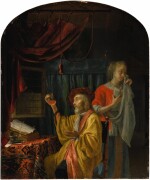 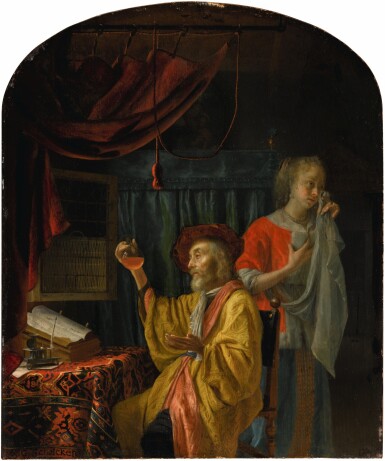 The Visit to the Doctor

The Visit to the Doctor

Oil on panel, in a modern painted frame.

The oak panel has a shaped top. It is in very good condition with bevelled edges on all sides and is flat with no joins or splits.

The paint layer is in a good preserved condition; the paint is slightly raised along the vertical grain with the potential for future vulnerability.

There is a scattering of minor restorations visible across the surface and 1-2 letters of the signature have been strengthened.

There is a small loss to the doctor's eye and beard and minor shrinkage cracks through the blue curtain.

Discoloured restoration behind the Doctor's head is excessive.

Some of the delicate glazes to the female figures hair and skin tones have been slightly compromised and there has been fading to the red glaze to the curtain , top left.

Overall, the painting is in a very good preserved state.

Acquired for the present collection by 1984.

A young woman stands in tears in a scholarly interior, as an elderly man examines a flask of her urine, diagnosing her lovesickness, or perhaps her pregnancy, his left hand outstretched in a dramatic gesture of enlightenment. While we certainly sympathize with her plight in either case, this would have been seen as a comical painting in its own day, because the elderly man, presumably a doctor, is in fancy dress, and appears as a charlatan, so that his foolishness – that of old age and falsely assumed wisdom, and consequently of a quack – is contrasted with hers – that of innocent youth led astray. That this is a scene from a human comedy is underscored by the deliberately theatrical setting, with green curtains as a backdrop, and a red curtain hanging from a rod above the picture-plane partly drawn open to reveal the actors. Above and behind the bed a painting of the Virgin and Child hangs in the shadow.

In some comparable treatments of this subject in Dutch seventeenth-century painting, including others by Schalcken, the diagnosis of pregnancy is made specific. In a later work by Schalcken of circa 1680–85 for example, a miniature foetus appears in the flask of urine.1 In the present painting and in many others this is not so clearly the case. In a contemporary text by Jan van Beverwijck, the symptoms of lovesickness include a red and fiery urine, such as we see here.2 In any event the two diagnoses were not, and are not, mutually exclusive.

As his earliest dated work, this painting clearly shows that at the start of his documented career Gottfried Schalcken, already in his mid-30s was a Fijnschilder, and was exploring ideas and subjects developed by his second teacher, the Leiden painter Gerard Dou. Of several comparable works by Dou, his Doctor's Visit of 1653, also on an arched top panel, presents a good example.3 As the recent exhibition devoted to the subject showed, painters working in artistic centres such as Leiden, The Hague, Delft, Rotterdam and Dordrecht, as well as Haarlem and Amsterdam and further afield, were well aware of each others' work, and for the most part kept up to date with the latest trends in styles and subject matter in genre painting, in part because travel between these cities by regular and frequent horse-drawn ferry services was much easier and more reliable than used to be thought.4 Not only artists, but certainly agents, patrons and the art-buying public traveled these routes constantly, ensuring the spread of demand, for example for particular subjects, in particular love, its practice and its effects and results.

As Naumann observed, the same model that Schalcken used here for the Doctor occurs in two other undated but presumably also early works by him.5

2 The other symptoms he described are a quick pulse, poor appetite, rapid mood changes, a pale complexion and sunken eyes; see J. van Beverwijck, Schat der Ongesontheyt, Dordrecht 1647, pp. 453–68. Pigment analysis shows that the urine in the flask was as orange as we see it now, and perhaps more so, since the inorganic yellow and the red lead pigments are stable, but the crimson glaze may have faded, which underscores the diagnosis as lovesickness.

4 A.E. Waiboer, Vermeer and the Masters of Genre Painting, New Haven and London 2017 (the exhibition was held in Dublin, Washington and Paris).