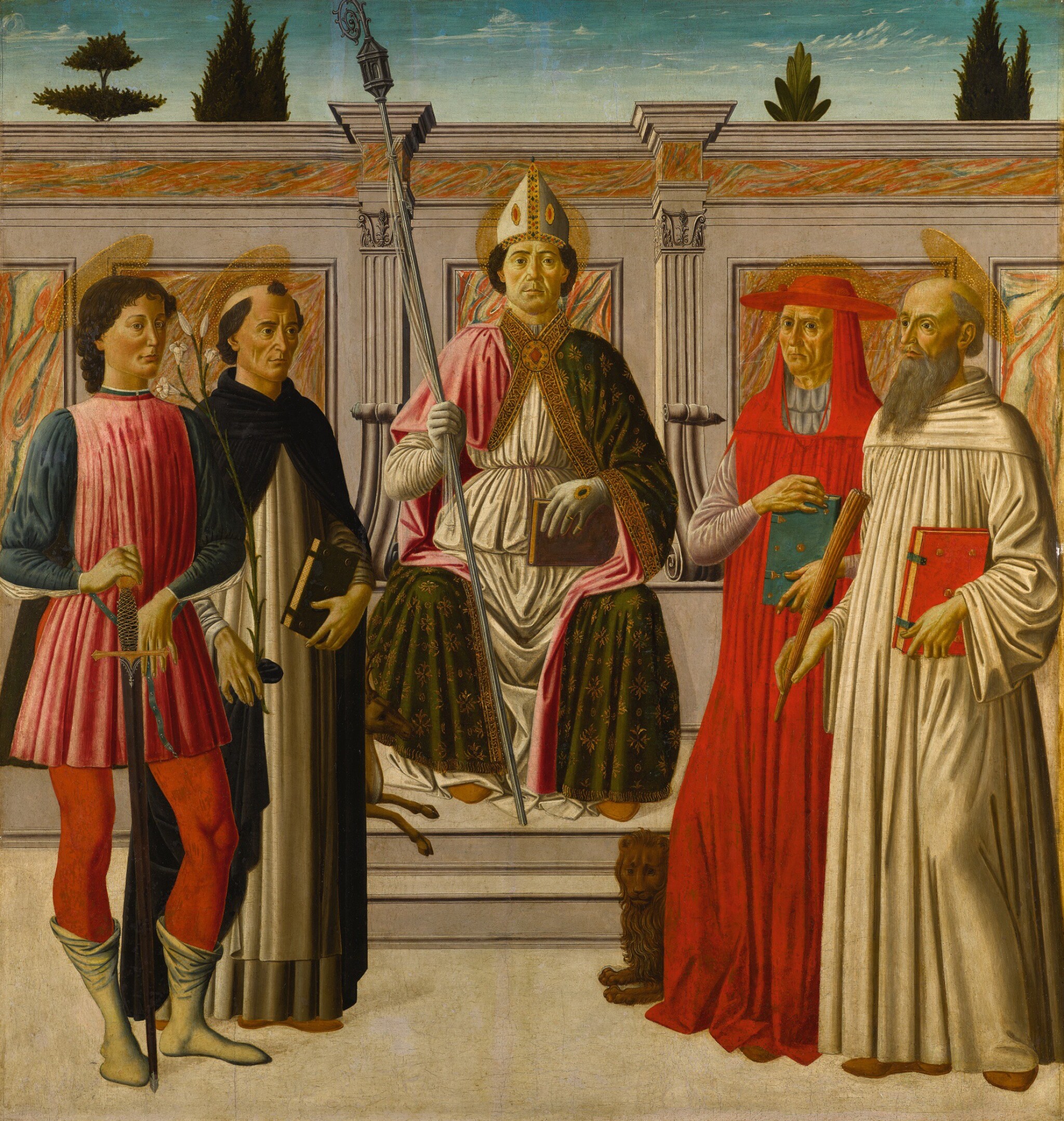 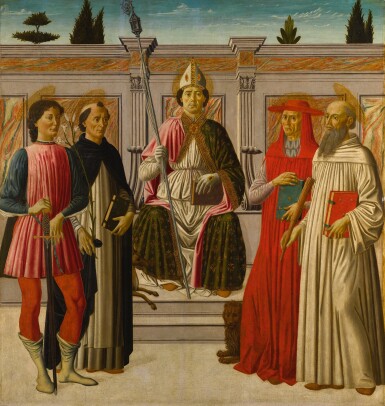 For a picture of this size and age the surface is in overall fair condition - it has and enamel-like surface and much of the gilt detail on the outfit of the central figure and the halos of all the figures are in nice condition. The scored drawing of the figures is lively, with subtle changes visible throughout the painting process, and the bold mapping out of the design is visible in the fluid lines of the architecture.

The large poplar panel has a cradle of support batons adhered to the reverse. The panel has some vertical faults and old cracks that are visible in a few areas - namely: running from the top margin from the staff down through the left hand of Saint Dominic; from the lower centre up to Saint Nicholas; from the lower margin up through the toes of Saint Hubert at the left; one running from the top central margin for approx 4 inches; on running from the upper margin just to the left of the right pilaster down to the marble to the right of the bishops head. These faults are old and restored - the retouchings have since discoloured. The varnish is much discoloured overall and the surface very dirty. There are small restored old damages and scratches and small losses throughout the large panel - none especially distracting bar a scratch at the very upper left corner that exposes the white gesso. Others include: a small old restoration (1 inch squared) in the chest of Saint Hubert, and some losses in his hair; a diagonal scratch in the face of Saint Nicholas, through his right jaw line and nose, and some losses as a result of flaking below in his neck and green robes - a section of the gilt boarder of his cloak hanging over his left wrist is re-constructed. There is a restoration in the book held by Saint Dominic, and another in the floor below his feet. The most concentrated areas of retouching appear to be in the red of the tights of the Saint Hubert, and in the red of Saint Jerome’s robes and some concentrated areas of blue overpaint in the sky (although much of the sky appears well preserved under the thick greenish varnish).

This hitherto unknown panel is an early work by Botticini, one of the most successful painters in Renaissance Florence. It was first attributed to Botticini by Lord Clark in in 1948. The artist enjoyed considerable commercial success both in his production of large-scale altarpieces and smaller paintings intended for domestic setting or private devotion, particularly tondi depicting the Madonna, including the tender Madonna and Child in a landscape, sold in these Rooms, 3 July 2013, lot 18, for £410,000.

The design recalls the remarkably comparable panel of very similar dimensions, formerly in the Woodward collection, and also from the artist's early period, which shows Saint Nicholas enthroned, with Saints Catherine of Alexandria, Lucy, Margaret and Apollonia.1 In the Woodward panel the male saint is seated on a throne in much the same way as the present Saint Nicholas, with the disposition of the attendant female saints matching the positions of the corresponding male saints seen here. It seems likely that the same cartoon was used to lay out the two designs.

The same marbled parapet, with the same trees poking from behind (though placed in different positions), provides the backdrop to both paintings. The unchanged marbled parapet accompanied by the same disposition of the various saints is also found in another early work by Botticini, the Madonna and Child with Saints Mary Magdalene, John the Baptist, Anthony Abbot and Francis, in the Pieve di San Pietro in Romena, Pratovecchio.2

We are grateful to Professor Andrea De Marchi for endorsing the attribution on the basis of a digital photo.