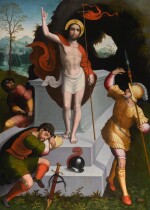 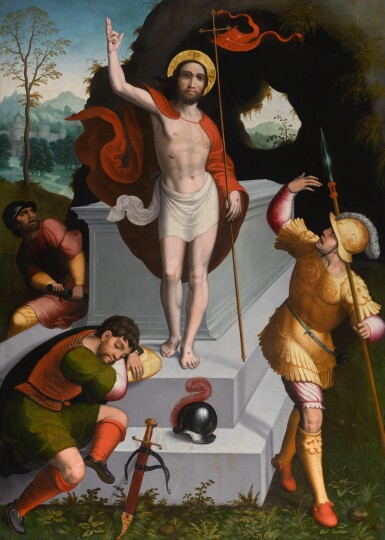 The Resurrection of Christ

The panel is formed of two vertical planks and the join is supported by inlaid butterfly battens. There are two series of vertical splits running the height of the panel on either side of the central join, also supported by inlaid butterfly battens. The reverse of the panel is additionally supported by four horizontal battens. The central join and some of the vertical splits are faintly visible under raking light from the front, with associated discoloured retouching, notably in Christ's torso and neck. Inspection under ultraviolet light confirms the aforementioned retouchings. It also reveals the extent of the campaign of restoration in Christ's torso, neck, face and central part of His halo. There are further areas of retouching scattered throughout as well as more notable areas in the background, particularly in the lower right corner. None of these impede the legibility of the image which appears fresh and ready to hang.

In the collection of a Spanish noble family, Madrid, since at least the mid-19th century.

This recently discovered panel is a significant addition to the works of Juan Correa de Vivar, the leading artist working in Toledo during the mid-16th century. The painting can be dated to between 1540–45, by which time the influence of his master, Juan de Borgoña, had given way to a more formal tradition inspired by the Roman mannerists, clearly visible in the present work. The Resurrection was evidently a favoured subject for Correa, for he treated it on a number of occasions during his lifetime, the earliest known example of which is an altarpiece of 1532–34, still in situ in Griñón.1

Dr Isabel Mateo Gómez dates the present work to circa 1540–45 and believes that it formed part of one of the artist’s most important commissions, a series of altarpieces for the Cistercian monastery of San Martín de Valdeiglesias near Madrid, a number of panels from which are today distributed amongst the Museo del Prado, Madrid, and other Spanish museums. She suggests that it was designed as the central panel to one of the smaller altarpieces and would originally have been flanked by images representing scenes from the Passion and saints from the Cistercian Order.

We are grateful to Dr Isabel Mateo Gómez and also to the late Dr William B Jordan for independently endorsing the attribution to Correa.