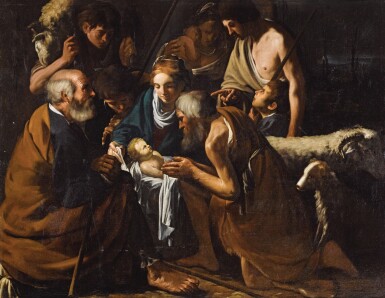 CARAVAGGESQUE MASTER, CIRCA 1614 | The Adoration of the Shepherds

CARAVAGGESQUE MASTER, CIRCA 1614 | The Adoration of the Shepherds

The Adoration of the Shepherds

The large canvas is lined and has a thick and shiny varnish. The paint surface is dirty with many surface accretions. There is a scratch underneath the bowed head of the figure at the Madonna's right shoulder. There are a handful of other surface scratches and scuffs and a scattering of very small losses, the most significant concentration of which are in the background centre right. There is a minor degree of wear in some of the darker tones and shadows, but for a canvas of this size it appears in overall good condition. Inspection under UV light reveals a thick varnish that fluoresces opaque, making early restoration impossible to read. There are only a very small number of retouchings visible on top of this varnish. Offered in an elaborately carved gilt wood frame in very good condition.

In the family collection of the present owner for two generations.

The attribution of this previously unknown and unpublished Adoration of the Shepherds has been the subject of much interest and debate. Gianni Papi (to whom we are grateful, and whose written expertise on this painting is available upon request) attributes this canvas to the intriguing Italian sojourn of Hendrick ter Brugghen. Ter Brugghen is recorded in Milan in 1614 preparing for his return journey to the Netherlands. He and another Utrecht artist are recorded as having ‘spent some years in Italy exercising their art’, and it is thought that he may have arrived in Italy circa 1604 or 1605, at the age of sixteen or seventeen.1 Cornelis de Bie wrote that Ter Brugghen had met Rubens in Rome, which means that he must have been in that city by 1606.2 If De Bie’s account is correct, then Ter Brugghen would have been the only member of the Utrecht Caravaggisti to have arrived in Rome while Caravaggio was still active there.

Papi bases the attribution of this Adoration upon stylistic similarities with other works that he attributes to Ter Brugghen’s Italian years. At the core of this group is a recently discovered Denial of Saint Peter, in the Spier collection, London, that Papi dates to circa 1611–12.3 He identifies the Spier canvas with the painting of this subject that is recorded, along with a second canvas depicting a scene of The Flagellation of Christ (of corresponding dimensions to the Spier painting), in the 1638 inventory of the Marchese Vincenzo Giustiniani as from the hand of 'Enrico d’Anversa.'4 Papi also notes stylistic similarities with the Saint John the Evangelist, in the Galleria Sabauda, Turin,5 that he also attributes to Ter Brugghen’s Italian period. Along with noting the common robust and forceful brushstrokes, dark brown colour scheme and contrasting sharp whites, as well as the strong sense of naturalism, Papi suggests that the model for the Sabauda painting might be the same boy that we see in the present canvas, whose inquisitive upturned face is visible behind the ram on the right, looking up to the pointing shepherd.

This group of paintings given to the young Ter Brugghen whilst he was in Italy is not, however, unanimously agreed upon. Wayne Franits (to whom we are grateful for his opinion) rejects the attribution of the Spier Denial of Saint Peter to Ter Brugghen, and Gert Jan van der Sman has raised the possibility that that canvas may be a copy after a now lost painting.6 Franits also notes similarities between this Adoration of the Shepherds and the Sabauda Saint John the Evangelist, although he also believes the attribution of that canvas to Ter Brugghen to be incorrect.

6 W. Franits, 'Hendrick ter Brugghen’s Paintings of the Crucifixion in New York and Turin and the Problem of His Early Chronology', in Journal of Historians of Netherlandish Art, 9:1, Winter 2017, p. 5.

Property from a European Private Collection
CARAVAGGESQUE MASTER, CIRCA 1614 | The Adoration of the Shepherds
Lot Closed
Lot 104