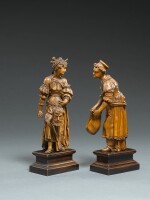 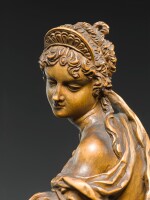 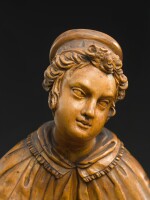 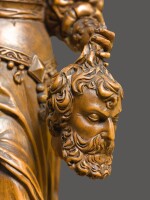 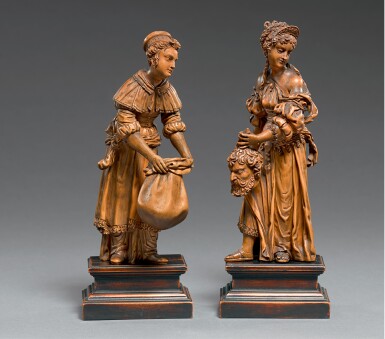 SOUTHERN NETHERLANDISH OR GERMAN, CIRCA 1600 | JUDITH AND HER MAID

SOUTHERN NETHERLANDISH OR GERMAN, CIRCA 1600 | JUDITH AND HER MAID

Property from a Private German Collection

SOUTHERN NETHERLANDISH OR GERMAN, CIRCA 1600

JUDITH AND HER MAID

There is some wear to the ebonised wood bases, including rubbing around the edges and minor stable splitting.

This lot is sold pursuant to a settlement agreement between the current owner and the heirs of Albert von Goldschmidt-Rothschild.

In his survey of German small-scale Renaissance sculpture, E. F. Bange described this pair of statuettes as 'striking' works by an unknown Lower Rhenish sculptor, dating them to circa 1540 (op. cit., p. 72). Writing in the late 1950s, Theodor Müller (op. cit.) discussed them afresh within the context of small sculpture in the Low Countries, implying a similar dating but proposing instead a southern Netherlandish origin. Significantly, Müller's thesis illustrates a figure of Salome in the Museum für Kunst und Gewerbe, Hamburg (inv. no. 1934,63), which is stylistically so close to the present figures as to suggest a common hand. Müller, however – presumably relying only on Bange's illustration of the present pair – did not seem to have recognised this affinity and instead proposed a considerably later dating for the Hamburg Salome. This was based on a comparison with a group of stylistically distinct, but compositionally identical, Salomes, including one forming a group with an executioner in the Victoria and Albert Museum (inv. no. 1173:3-1864), now dated to circa 1600 and displayed in the Baroque galleries.

Though likely to have been made some decades later, the present figures show an affinity with Conrad Meit's alabaster statuette of Judith now in the Bayerisches Nationalmuseum (inv. no. R 204), dated to circa 1525-1528. Nude and resting on her sword, Meit's Judith presents the head of Holofernes on a pedestal, confidently gazing at her prize. The present Judith, though clothed, is closely related to Meit's heroine in her narrow-shouldered figure, elaborately braided hairstyle, and her downcast expression with a hint of a smile. Even the head of Holofernes is stylistically analogous, suggesting that the sculptor of the present group may have been familiar with Meit's statuette.

While the present Judith averts her gaze from the severed head, her Maid – who, remarkably, survives as her companion – is represented with a furtive turn of the eyes and, leaning forward, seems eager to receive the head into her sack. The iconography of the group appears frequently in Northern Renaissance art, such as in prints by Hans Sebald Beham (1500-1550) and Erhard Schön (1491-1542). In this configuration, the subject is thought to have had connotations of feminine danger and conspiracy. Judith's beguiling sexuality is here implied by her bare left shoulder and exposed right ankle, revealing an exotic sandal.

Though the group is stylistically and conceptually rooted in the early 16th century, its relation to the Salome in Hamburg, and the figures of Salome which anticipate the Baroque age of Rubens, argue for a dating around 1600.

Albert von Goldschmidt-Rothschild was born in Frankfurt on the Main on June 3, 1843, the son of the Jewish banker and art collector Maximilian von Goldschmidt-Rothschild and his wife Minna Karoline, née von Rothschild. Like his father, Albert built up an extensive and precious art collection. Adding to his possessions, in April 1930 he acquired Grüneburg Castle, together with its contents, from the estate of his maternal grandparents Wilhelm Carl and Hannah Mathilde von Rothschild.

Following the Nazis’ assumption of power, the von Goldschmidt-Rothschild family was increasingly confronted with persecution measures, as a result of which its members lost, among other assets, their art collections. According to a letter from Fritz Mertens, the legal representative of his heirs, to the Central Registration Office in Bad Nauheim of December 8, 1948, Albert had already considered very soon after the Nazis’ rise to power to leave Germany and, for this purpose, to acquire funds in order to pay Reich Flight Tax. He therefore sold Grüneburg Castle and Park to the city of Frankfurt on 14 June 1935, but did not receive a fair price. He also started selling works of art from his collection through private sale as well as auction: on 11-13 May 1936 at Hugo Helbing, Frankfurt, and on 14 December 1937 and 5-7 April 1938 at Kunsthaus Heinrich Hahn, Frankfurt.

The remaining part of the collection should have been moved to Switzerland, where Albert had emigrated in January 1939. He joined his family in Lausanne, and remained there until his death on 27 December 1941. Unfortunately, however, the Nazi authorities prevented the export. Having remained in the warehouse of the moving company, the artworks were said to have been lost in a fire during an air raid on 22 March 1944.

Property from a Private German Collection
SOUTHERN NETHERLANDISH OR GERMAN, CIRCA 1600 | JUDITH AND HER MAID
Lot Closed
Lot 68