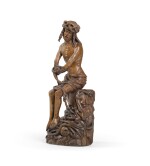 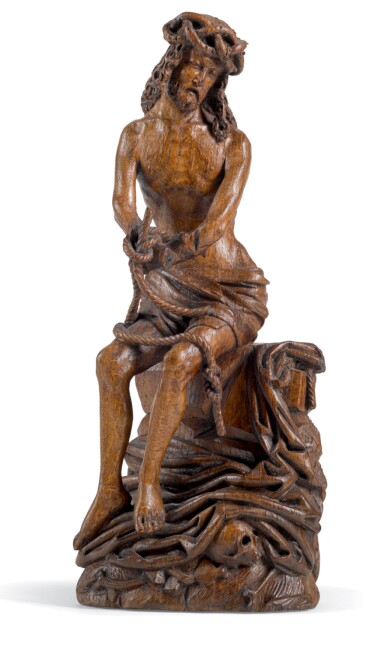 CHRIST ON THE COLD STONE

Overall the condition of the wood is good, with some wear and dirt to the surface consistent with age. The hands are lost, and there are some losses to the rope and the crown of thorns. There is minor stable splitting to the wood, consistent with the material, notably to the proper left side. The strand of hair at the front on the proper right side is partially restored.

There is a modern metal loop at the back for hanging.

The motif of Christ on the Cold Stone developed in the Low Countries, and gained currency during the 16th century, particularly in sculpture. Later, it also disseminated to other European regions, in particular in modern-day France. The Brussels school of carving was the epicentre of this dissemination, and many models of the type were produced there - compare, for instance, to a Christ in Distress in the Rijksmuseum (inv. no. R.B.K.1955-83, dated circa 1520) and another in Brussels (op. cit. no. 29, attributed to the Brussels region, circa 1515).

The present statuette is a faithful interpretation of the Brussels model, and as such, could be attributable to that region. However, in the Santiago exhibition (op. cit. p. 350), the slight variety in the facial features compared to the Brussels workshop leads Didier to conclude a more likely origin in Louvain, where the carving could be said to display slightly less variety, and the facial features are more generalised - as opposed to the more individualised Brussels type.