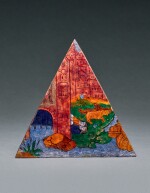 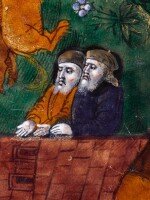 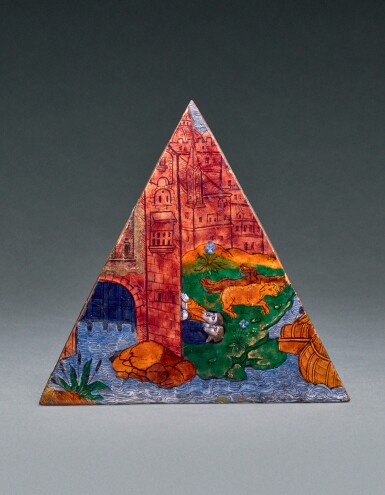 MASTER OF THE AENEID (ACTIVE CA. 1530-40), FRENCH, LIMOGES, CIRCA 1530-35 | PANEL WITH A SCENE FROM BOOK III OF THE AENEID (AENEAS FOUNDS PERGAMUM BUT IS CHASED AWAY BY THE PESTILENCE)

MASTER OF THE AENEID (ACTIVE CA. 1530-40), FRENCH, LIMOGES, CIRCA 1530-35 | PANEL WITH A SCENE FROM BOOK III OF THE AENEID (AENEAS FOUNDS PERGAMUM BUT IS CHASED AWAY BY THE PESTILENCE)

painted enamel on copper with gilt highlights, mounted on a velvet lined wood board

Overall the condition of the plaque is good, with minor wear and dirt to the surface consistent with age. The plaque is likely to have been cut into a triangular shape from an originally square shape, to be fitted on the lid of a casket. As a result the left and right edges are sharp and slightly angled. There are a few very minor losses at the edges, notably to the left side at the top, and to the right side at the level of the cows. There are a few areas of restoration, notably to the bottom left corner, around the windows above the gateway, and above the bottom edge at the centre. Much of the gilding appears to have worn. There are a few slight surface scratches. There is minor stable craquelure, consistent with the material. There is more prominent craquelure to the counter-enamel and there are a few small losses to the counter-enamel at the edges.

There is some wear to the velvet covered mount, including fraying.

acquired at the above sale by J & S Goldschmidt, Frankfurt (where disassembled);

acquired by the family of the present owner (1934)

The Master of the Aeneid, a Notname for a master enameller active in Limoges in the 1530s, has been widely researched and debated throughout art history, particularly during the 19th and 20th centuries. Although most of his work, a series of plaques with scenes illustrating Virgil’s Aeneid, has been extensively studied, the present plaque appears so far to have escaped attention and remained unpublished. Eighty-two unique scenes of the Aeneid were recorded by Baratte (op. cit., pp. 134-148) in the catalogue raissoné of the Master’s oeuvre: this eighty-third plaque can now be added to the ensemble.

Publications on the Master of the Aeneid have often focused on problems of dating and identification. As early as 1867, when the group of enamels was first discussed on the occasion of the Paris Exposition Universelle, the connection between these plaques and a series of woodcuts published by Jean Grüninger in 1502 was made (op. cit. 1992 reproduces these). The 136 woodcuts of scenes from the Aeneid, supplied by humanist and poet Sebastian Brandt, gained immediate popularity and were disseminated widely. Every scene of the Master of the Aeneid in enamel faithfully reproduces one of the woodcuts by Brandt.

The question of the identity of the Master of the Aeneid remains. Many known Renaissance enamellers of the Limoges school have been suggested by the scholarship, including Colin Nouaillher I and II, Jean Penicaud II, and a young Pierre Reymond. However, due to the uniformity of the style of the enamelling, as well as the scope of the project - producing this many plaques would have occupied a single enameller for a significant part of their career - the reigning solution was presented by Marquet de Vaselot in 1912, who concluded the plaques to have been produced by an independent, unidentified Master active in Limoges, named the Maître de l’Énéide.

On the present plaque, the hand of the Master of the Aeneid can easily be identified due to some characteristics apparent in his entire oeuvre: the figures have rosy complexions achieved by applying white over purple enamel, the white enamel being applied thickly in areas to enliven the surfaces; the castles have their typical purple hues, and the translucent ochre and green hues of the landscape are equally characteristic. Perhaps most specific to the series are the grey-ish blue seas, covered with wavy black ripples.

Comparing our plaque to Brandt’s woodcuts, the present scene becomes identifiable: Aeneas has founded the new city Pergamum, but is chased away by a devastating pestilence (Strasbourg 1992, no. 419). The story, recounted to Dido by Aeneas in Book III of Virgil’s epos, (lines 90-146), is as follows: Aeneas consults the oracle of Apollo at Delos and asks where he should settle and build a new city for the surviving Trojans. He interprets the oracle’s message wrongly, concluding he must sail for Crete. Once ashore on Crete, Aeneid founds a new city and calls it Pergamum. Then, however, the fates strike: ‘And now the ships were just drawn up on the dry beach; [...] when on a sudden, from a tainted quarter of the sky, came a pestilence and a season of death, to the waisting of our bodies and the piteous ruin of trees and crops’ (trans. H. R. Fairclough). As the pestilence is wreaking havoc on Pergamum, as seen on the present plaque with both humans and animals falling victim, Aeneas has a prophetic dream where he is told by his household gods that he should settle in Italy. The Trojans thus abandon Pergamum. On the Brandt woodcut, the left corner of the scene shows Aeneas asleep in his bedroom having his dream; it also shows banderoles with the relevant (topographical) names at the top of the scene and above the figures in Aeneas’ bedroom. The present plaque has probably been cut down from a square to its current triangular shape, causing these details to be lost (Baratte, op. cit., no. 25 describes the other triangular plaque as having been cut down). In the narrative sequence of the Aeneid plaques set out by Baratte, the present scene would fall between numbers 23 and 24: the plaque depicting the abandonment of Crete, now in the Louvre (inv. no. OA 7555) immediately follows in the story.

It seems to have been a coincidence for the present plaque to have remained unpublished until today. Together with the similarly triangular enamel, now in the museum for Kunsthandwerk in Frankfurt, it formed the gable of a chasse which comprised a further 14 square panels by the Aeneid Master. The casket was illustrated in the Magniac sale catalogue in 1892, but due to the angle, the present plaque was invisible. Goldschmidt dismantled the casket and sold the panels individually. The two triangular plaques went to the Frankfurter Historisches Museum - according to the Deutsche Fotothek as early as 1896, although Baratte records them to be with Justus Porgès in 1912. The two triangular plaques did enter the collection of the museum simultaneously, as indicated by the consecutive inventory numbers inscribed to the reverse of the plaques. The Frankfurt plaque was moved to the Museum für Kunsthandwerk in 1934, it is likely that our plaque was deaccessioned at the same time, and acquired by the family of the present owner.

A previously unknown plaque by the Master of the Aeneid, remaining in private hands, is supremely rare. The present plaque, which preserves all the Aeneid Master’s characteristics of style, forms an important addition to the oeuvre of this intriguing Master enameller. Property from a German Private Collection
MASTER OF THE AENEID (ACTIVE CA. 1530-40), FRENCH, LIMOGES, CIRCA 1530-35 | PANEL WITH A SCENE FROM BOOK III OF THE AENEID (AENEAS FOUNDS PERGAMUM BUT IS CHASED AWAY BY THE PESTILENCE)
Lot Closed
Lot 28