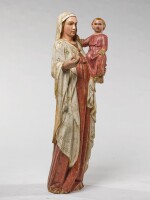 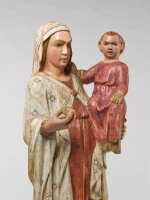 Overall the condition of the wood is good, with some dirt and wear to the surface consistent with age. There is stable splitting to the wood in areas, consistent with the material, including a slightly open but stable split to the front at the centre of the virgin's torso, and another slightly open split to the back running from the proper left shoulder to the bottom of the base. Part of this split has been reinforced with later wood inserts. There is further splitting to the child's proper right wrist and to the centre of the virgin's chest. There is a small loss to the Christ child's feet. There is a later reattachment to the back of the child's head, and there is also a metal plug to the child's head. There is some evidence of past worming, in particular to the back and around the base of the figure, this has led to some minor losses around the base. There is general wear to the polychromy including some flaking and minor losses. There are particular losses to the polychromy on the Child's forehead at the proper left temple and to the back of his head, to the ball in the Virgin's proper right hand and to that hand. The polychromy was refreshed in areas throughout, in particular to both faces and other flesh parts and red robe. There are areas of early polychromy remaining.

This strong, fully frontal image of the Virgin and Child epitomises sculpture from the Abruzzi region of Central Italy: the slightly stiff, iconic image, the long straight nose, and the diminutive mouth. As opposed to most of the Italian peninsula, wood sculpture flourished in the Abruzzi region during the thirteenth and fourtheenth century, as suitable stone and marble for sculpting was not readily available (Moskowitz, op. cit., p. 175). Absorbing influences from many surrounding regions, particularly Tuscany, the Abruzzi region developed its own distinctive, homogeoneous style, in which a frontally facing sculpture, made out of a single trunk, was often placed as the central focus point on an altarpiece with painted wings.

Delpriori has recently attributed the present Virgin to the Master of the Beffi Triptych, active in Abruzzi in the late fourteenth and early fifteenth century (private correspondence). Although perhaps better known as a painter, Delpriori and Pasqualetti (op. cit.) both make a convincing comparison between the paintings and sculpture by the Master, with Delpriori arguing that the same master, or at least his workshop, would have been responsible for both the painting and the sculpting of a single altarpiece (op. cit. p. 71). Compare the drapery on the present Virgin with that of the figures of St Andrew and St Anthony in the Museo Civico in Sulmona (idem, figs. 17-18), where in particular St Andrew's robe shows similar folds. Delpriori further mentions the polychromy of the drapery of the Maestro di Beffi, which, influenced by earlier Abruzzi masters, as on the present Virgin, shows a bordered edge, and 'embroidered' geometric shapes.