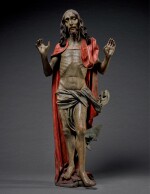 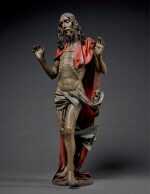 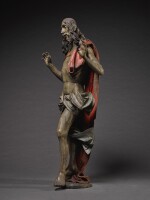 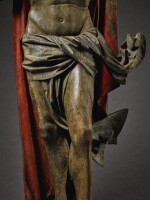 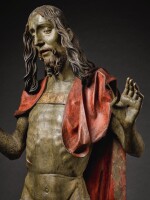 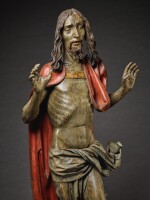 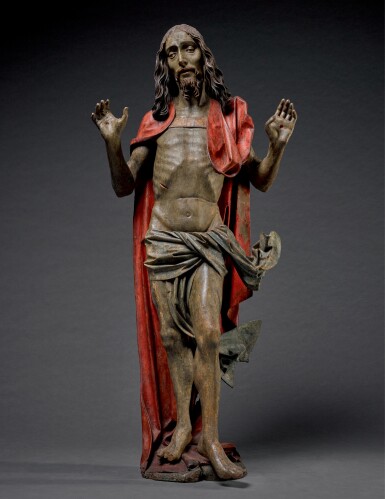 CHRIST AS THE MAN OF SORROWS

Overall the condition of the sculpture is good, with some wear and dirt to the surface consistent with age. The crown of thorns is lost, and there are holes to the head where it would have been attached, some of which have been covered with plugs, including to the forehead. There are a few further losses, notably to two of the toes of the proper right foot and to the base, where there is evidence of non-active worming. There is also a minor loss to the proper left ear, and another to the mantle behind the proper right leg. The toes of the proper left foot are a later replacement. The sculpture is carved in sections, and several joints are slightly visible. There are joints to the finger sections and thumbs of both hands, and it is likely that at least one set of fingers is a later replacement. There are a few further joints which appear to be original, including at both elbows and to the section of the perizonium between the legs. There is a possible reattachment to the upper corner of this section of the perizonium. A small section of the torso on the proper left side appears to have been carved separately. There are a few circular plugs around both elbows. There is minor stable splitting to the wood, consistent with the material, including to the mantle falling from the proper left shoulder, to the base, and to the back of the head. The sculpture was recently professionally cleaned, removing surface dirt. The present polychromy has age but is likely to have been largely refreshed over time. The skin areas are a greenish colour. There is wear to the polychromy throughout, including craquelure and minor losses. In several areas there is some in-painting, including to the ribcage. There is a notable area of polychromy loss to the red of the cloak on the proper left side. The perizonium has been painted a blue colour, much of which has worn. There are a few traces of a pinkish skin tone in areas, notably at the proper right thigh. There are minor traces of gilding to the clasp of the mantle. The sculpture is partially hollowed at the back. There are two iron mounts at the back.

confiscated by Deutsches Reich after November 25, 1941;

Previously listed on the German lostart.de database, the sculpture has been consigned as a result of a settlement agreement under the Washington Conference Principles for Nazi-confiscated Art. The settlement was concluded between the heirs to Harry Fuld jun. and Kirchengemeinde St Johannes der Täufer und Maria Himmelfahrt, Erkrath, where the sculpture was located since the 1950s.

The importance of this imposing Christ as the Man of Sorrows was recognised in the early 20th century, when it was published by the eminent art historians, Otto Schmitt and Georg Swarzenski (1921, op. cit.), and Friedrich Lübbecke (1923, op. cit.). The Christ has since been attributed to Heinrich Iselin, a sculptor who has long been well-known by name, but whose oeuvre has only recently been brought to light. It can now be counted among Iselin’s most significant surviving works, and it provides a valuable testament to German Late Gothic sculpture’s fascination with the Schmerzensmann.

Heinrich Iselin is regarded as the most important sculptor active in late-medieval Konstanz. Thought to have hailed from Ravensburg, he was employed in the Konstanz workshop of his father-in-law, the carpenter Simon Haider, by the 1460s. For much of the 20th century, Iselin was presumed in the scholarship to have been the author of a series of busts from the choir stalls in Weingarten (1477-1478, see Karlsruhe cat., op. cit., nos. 35-36), as well as the largely-lost figures from the stalls of Konstanz Cathedral (1467-1470). The latter were originally commissioned from the great Upper Rhenish sculptor Nikolaus Gerhaert von Leyden (c. 1420-1473), before a payment dispute caused them to be completed by Haider’s workshop. Though Iselin’s involvement in the Weingarten stalls is documented, Albrecht Miller (see op. cit. 1998) has argued that the surviving, stylistically isolated, busts must instead be attributed to Hans Henckel, a sculptor from Memmingen also active in the Haider workshop, who died around 1479. In 1481 Iselin was granted citizenship in Konstanz and enjoyed a successful career in the city, becoming the master of Hans Henckel’s son, Augustin. Though none of his works are securely documented, Iselin is now considered to be identical with the Master of the Meersburg Annunciation Altar, named after his masterpiece of circa 1490 in the Unterstadtkapelle of the Lake Konstanz town of Meersburg. A larger oeuvre has been identified by Miller (see op. cit. 2013), which includes works in the Schweizerisches Landesmuseum, Zurich, the Bayerisches Nationalmuseum, Munich, and the present Man of Sorrows.

Iselin’s proposed authorship of the Christ is substantiated by a comparison with the Angel Annunciate in Meersburg. Both share the same distinctive features; a broad face with arched brows, a prominent, thin bridge of the nose, and large, crescent-moon shaped eyes, framed by deeply undercut, wavy strands of hair. The stylised ribcage and thin folds of the perizonium reappear in the monumental Crucified Christ in Oberstaufen, dated by Miller to Iselin’s late career around 1510. Being among his earlier works, Iselin’s Man of Sorrows is fundamentally indebted to Nikolaus Gerhaert, whose artistic output exerted considerable influence on the succeeding generation of sculptors in the southern German-speaking world, and who is documented as having worked in Konstanz. The dynamism of the stance and the fluttering perizonium display the realism and immediacy with which Gerhaert introduced fresh impulses into Late Gothic sculpture. The Christ’s naturalistic open-mouthed expression - as if captured in the act of speaking - is anticipated by Gerhaert’s stone half-figure of the Man of Sorrows in Wiener Neustadt (Roller, op. cit., pp. 283-285, no. 19).

Christ as the Man of Sorrows was a popular iconography in Late Gothic sculpture. It gained particular currency in Germany, where statues of the Schmerzensmann frequently surmounted monumental altarpieces. A time-transcending motif, the Man of Sorrows symbolises the Passion of Christ and the overcoming of sin and death. Christ is represented as both dead and alive, as he draws attention to the signs of his bodily suffering: the Crown of Thorns, his side-wound, and the crucifixion wounds on his hands. Intended to rouse the viewer to compassion, the image of the Man of Sorrows simultaneously conveys God’s compassion for mankind. In his 1935 survey of the motif in sculpture, the art historian Gert von der Osten distinguished between different types of the Schmerzensmann according to gesture. The ‘purely pleading’ gesture exhibited by the present Christ - with both hands raised - was said by von der Osten to have had a twofold significance: while minding the viewer of mankind’s sins, Christ assumes an intercessionary role by pleading with God for His forgiveness (op. cit., p. 116).

When it was published in the 1920s, the Man of Sorrows was in the collection of Harry Fuld Senior, a pioneer in the German and European telephone industry between the wars. Although originally destined to join the art and antiquities business of J. & S. Goldschmidt, founded in the nineteenth century in Frankfurt by his uncle Julius Goldschmidt (1858-1932) and his father Sally Fuld (1836-1882), Harry Fuld Sr. trained in banking and later co-founded the highly successful firm Deutsche Privat-Telefon Gesellschaft H. Fuld und Co. Like many German-Jewish industrialists, Fuld Sr. allocated some of his wealth towards cultural causes, and he became a major patron of the Städel Museum and the Liebieghaus in Frankfurt. He was also a passionate and committed art collector in his own right, a pursuit in which he was guided by the director of the Städel Museum, Georg Swarzenski (1876-1957). The Christ as the Man of Sorrows clearly held some significance within Fuld’s diverse collection, as it is pictured behind his desk in an old photograph of his study in Berlin-Grunewald. Like the telephone business that he left behind at his sudden death on a business trip to Switzerland in 1932, Fuld Sr.’s art collection was appropriated from his heirs, including Harry Fuld Jr., by the National Socialists after 1933.