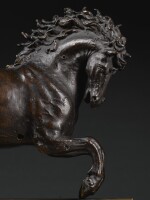 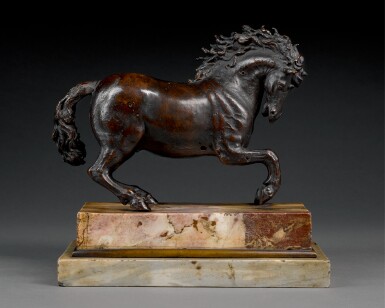 bronze, on a mottled marble base

Overall the condition of the bronze is good with minor dirt and wear to the surface consistent with age. There are a number of original casting flaws in the form of small holes to the bronze including to the neck to the belly on both sides, and in the tail and mane. There are a series of minor stable fissures in the bronze, including in the horse's haunches. There are some stable slightly visible original joints at the buttocks, and there is a plug. There is a possibly restored section at the horse's proper left hind leg. It is possible that the horse's hind legs have been slightly compressed, lowering the front of the horse. There is minor dust in the crevices.

There is some general wear to the base including minor chips and abrasions.

Francesco Fanelli's equestrian bronzes were highly celebrated in seventeenth-century England. George Vertue wrote that 'he had a particular genius for these works and was much esteemd in K Charles I time – and afterwards.' The present Rearing Horse is very close to the beast seen in a rare version of his St George and the Dragon, known from a cast formerly in the Emma Budge collection, sold in her forced sale in Hamburg, 27-29 September 1937, lot 122. The present horse is essentially the same, but lacks the rider's cloth seat and reigns, and has a slightly different tail. There are also a number of technical differences: including the presence of a chased (stippled) surface and punched eyes. Another cast is in a private collection, again with slight variances, including a straighter tail and hollowed hooves.

Like the Budge cast, the present bronze may have once formed part of a St George group, though the absence of riding accoutrements indicates that it was a stand-alone statuette. Fanelli's St George and the Dragon exists in two principal variants which were identified by John Pope-Hennessy. The first features the sculptor's Leaping Horse and shows St George leaning away and simultaneously lancing the dragon. Its exemplar, formerly in the collections of the Duke of Portland, is believed to have been purchased by William Cavendish, Duke of Newcastle (1592-1676). The second variant incorporates another Rearing Horse, and shows St George leaning forward, grasping the reigns of the horse with one hand, while lancing the dragon with the other. A cast is in the Holburne Museum, Bath. The Budge bronze represents a third and possibly later variant which relates to the second.