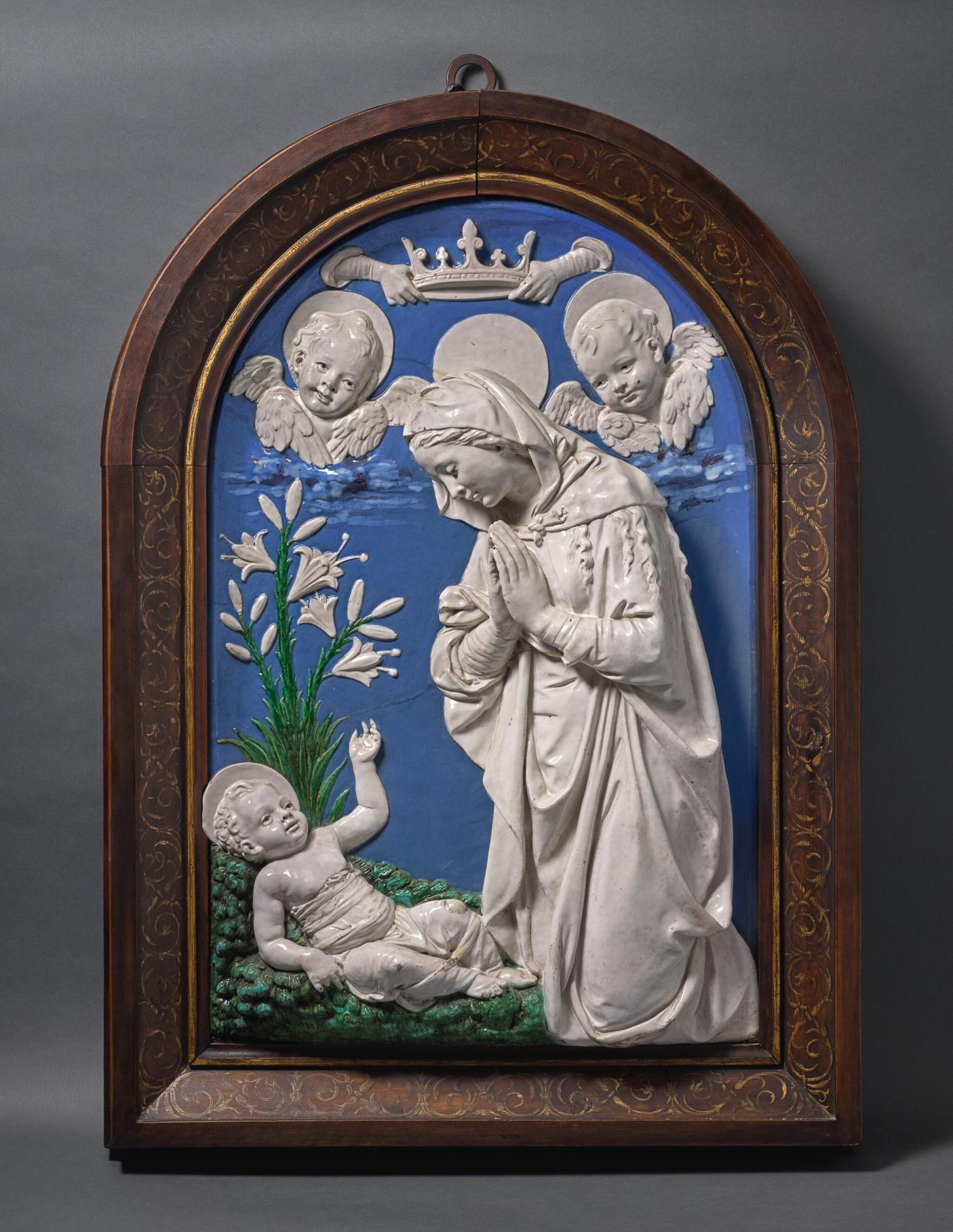 Overall the condition of the terracotta is very good, with minor dirt and wear to the surface consistent with age. There are a few minor restorations which are detailed in this condition report. There is a restored, slightly visible, possibly original, fissure running from the ground beneath Christ, through Christ’s proper right hand, chest and proper left upper arm, through the stems of the lilies, to the Virgin’s proper right forearm and across to under her proper left forearm. There are also some restored, slightly visible fissures to the Virgin’s sternum and halo. There are some further small areas of old restoration, including to the Virgin’s veil above the forehead and at various points along the edges of the relief, including at the top (centre) and at the sides. In addition

there are various small patches of old restoration to some of the folds and high points of the drapery, and to the Virgin’s drapery at the bottom right corner (some of this restoration is unstable) and to Christ’s knees. There is a further slightly visible original fissure between the Virgin’s halo and the far left seraph. There are a few very small losses to the glaze including at and around the lilies, to the proper left cheek of the right seraph and various very minor losses and abrasions to the body of Christ. There are a few very small air bubbles in the glaze. There is a small area of loss to the edge of Christ’s halo. It’s interesting to note that there is a tonal difference between Christ’s upper body and lower body. There are some small areas of craquelure to the glaze, including to the green hay or grass. There are various small impurities and small lacunae to the white glaze, in particular to the Virgin. There are a few small lacunae in between the Virgin’s hands. There are some areas that appear to have been originally unglazed, including to around the finials of the crown. The relief is in very good condition to the reverse: the likely original fissure running between the halos at the top is slightly visible to the reverse and the original glaze has seeped through the fissure, there is possible restoration in this area. The edges of the relief at the back are uneven: the bottom edge is uneven (probably originally so). There are a few further minor original fissures including behind the virgin’s drapery. The frame is made in sections and joints are visible, there is a slightly open joint at the top at the centre. There are metal mounts to the reverse. There are wood pins in the frame. There is minor general wear, including to the gilding.

probably acquired at the above sale in 1910;

by family descent to the present owners

This beautiful Della Robbia relief with the Madonna adoring the Infant Christ re-emerges onto the art market for the first time in over a century, having been in a private collection probably since it was last sold in the Maurice Kann sale in Paris in 1910. The relief shows the Virgin kneeling in adoration over the Christ Child who raises His left hand in blessing. Above, the hands of an invisible cherub crown the Virgin as Queen of Heaven, and Her head is flanked by seraphim. Christ reclines on a mound of green hay, behind which springs a lily, its flowers bursting into bloom. The composition perfectly balances the celestial and the corporeal, with Christ connected to the earth but facing the heavens: the hypostatic embodiment of the human and the divine.

The model is attributed to Andrea della Robbia, nephew of Luca della Robbia, and is iconic, having been produced in numerous versions in the workshop of Andrea and possibly subsequently by his followers (ref. Gaborit and Bormand, op. cit., pp. 103-102, nos. 5 and 6). Gentilini has argued that the model derives from one of Andrea's most significant commissions, the Nativity altarpiece for the Chiesa Maggiore of the Franciscan convent at La Verna in Tuscany, completed in 1479. Andrea was responsible for a number of important altarpieces at La Verna, produced between circa 1477 and 1490; they hold a seminal place within his oeuvre. The Nativity is more complex than the present model, and shows the Madonna and Child below the half figure of God, who is crowned and is flanked by angels and seraphim, whilst the Holy Spirit in the form of a dove beats its wings beside the Virgin's face.

The model was evidently one of Andrea's most successful since it is known in a number of reduced versions. One of these, the most famous, is the version in the Museo Nazionale del Bargello, Florence (inv. no. 71, see Marquand, op. cit., no. 140), which is set into an elaborate garlanded frame with a console underneath adorned with the arms of Branatio di Giovanni di Piero Campagno. Marquand records that it was in the monastery of San Marco in the Sala del lavabo in the 17th century (interestingly Andrea was an adherent of Savonarola, who had been prior of San Marco). Many of the other versions, however, were probably commissioned or acquired as altarpieces for private chapels, hence their smaller scale (this is probably also the case with the present relief). The Antinori appear to have commissioned two versions (one in the Palazzo Antinori, another in the Morgan Library, see Marquand, op. cit.). Another, once owned by Ruskin, is now in the National Gallery of Art in Washington (inv. no. DSC08825), and bears the arms of the Girolami.

The Kann Adoration relief differs from the other known versions in showing the Christ Child clothed; it appears to be unique in this respect. Differences can also be seen in the Virgin's tassled collar, and the lack of colouration of the stems of the lillies and the cabochon jewels in the crown (these are left white). Marquand refers to the present relief as having been 'from the Odiot sale'. This may be a reference to the 26-27 April 1889 Paris sale of the collection of Ernest Odiot. A Della Robbia relief was indeed included in that sale, attributed to Luca, but this is unlikely to be the same since the description is different, and the catalogue was written under the supervision of Charles Mannheim (1833-1910) who was also the expert for the Kann sale and so surely would have referenced the Odiot provenance in the latter catalogue.

The sale of the Kann Adoration relief marks a rare opportunity to acquire a beautiful version of one of Andrea della Robbia's most iconic models and with exemplary provenance.